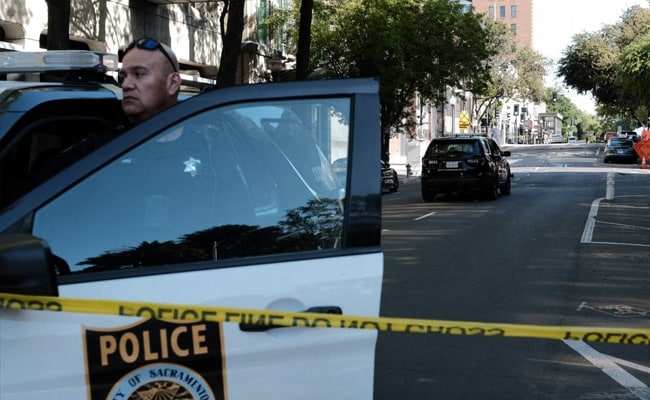 Earlier, police had called for people to avoid the area as the scene remains active. (Representational)

Six people were killed and 12 others injured, some critically, in a shooting early Sunday morning in California’s state capital of Sacramento.

The city’s police chief, Kathy Lester, told reporters that around 2:00 am, “a large fight took place” in the downtown area just before “multiple shooters” opened fire.

Officers on patrol nearby heard the gunshots and saw people running, she said.

Upon arriving at the scene, “they encountered a large crowd and multiple gunshot victims.”

Despite attempts at resuscitation, six victims were pronounced dead at the scene, three men and three women — all adults.

Twelve others were hit by gunfire and are being treated in local hospitals, Lester said.

At a press conference Sunday morning, Sacramento Mayor Darrell Steinberg described some of the hospitalized as “seriously and critically injured.”

He also called on anyone with information to contact authorities or submit evidence via a scannable QR code.

Lester said that a “stolen handgun” had been recovered at the scene, and that investigators had already received multiple videos and tips from members of the public.

A video posted online Sunday appeared to show people scuffling in the street, then starting to run as gunfire can be heard. AFP could not verify the footage, and it was not known if there was a direct relation, but local police said they were aware of the video.

“It was just horrific,” said community activist Berry Accius, who arrived minutes after the shooting.

“Just as soon as I walked up you saw a chaotic scene, police all over the place, victims with blood all over their bodies, folks screaming, folks crying, people going, ‘Where is my brother?’ Mothers crying and trying to identify who their child was,” he told local broadcaster KXTV.

The shooting happened in the downtown area, just blocks from the state capitol and close to the venue where the NBA’s Sacramento Kings play.

The San Francisco Chronicle quoted a woman at the scene as saying she had been told that her husband of 12 years was among the dead.

The woman, whom the paper did not name, said a stranger had answered her husband’s telephone when their daughter called, but that she had been unable to find out what had happened, despite being on police lines for several hours.

“It sounds like a lot of innocent people lost their lives tonight,” the Chronicle quoted the woman saying.

“We haven’t gotten an answer.”

Mayor Steinberg said it was difficult to find the right words to describe the tragedy.

“The numbers of dead and wounded are difficult to comprehend,” he said, adding that he was waiting for more information about the incident.

See also  Cryptocurrency Regulation Bill May Not Be Introduced in Budget Session; Know Why

“Rising gun violence is the scourge of our city, state and nation, and I support all actions to reduce it,” he said.

The mass casualty shooting is the latest in the United States, where firearms are involved in approximately 40,000 deaths a year, including suicides, according to the Gun Violence Archive website.

California Governor Gavin Newsom, in a post on Twitter, said “We cannot continue to let gun violence be the new normal,” and described gun violence as a “crisis” for the United States.

Lax gun laws and a constitutionally guaranteed right to bear arms have repeatedly stymied attempts to clamp down on the number of weapons in circulation, despite greater controls being favored by the majority of Americans.

Three-quarters of all homicides in the US are committed with guns, and the number of pistols, revolvers and other firearms sold continues to rise.

That number does not include “ghost” guns, which are sold disassembled, lack serial numbers, and are highly prized in criminal circles.

In June 2021, 30 percent of American adults said they owned at least one gun, according to a Pew survey.