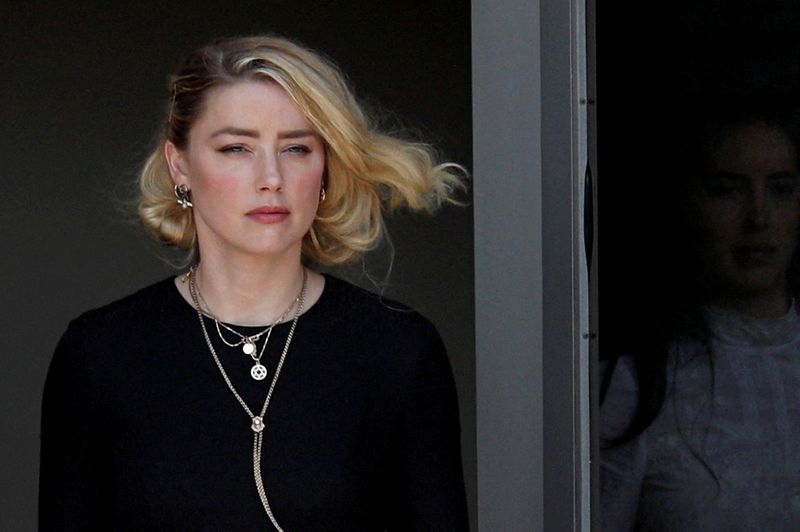 © Reuters. FILE PHOTO: Amber Heard leaves Fairfax County Circuit Courthouse after the jury announced split verdicts in favor of both her ex-husband Johnny Depp and Heard on their claim and counter-claim in the Depp v. Heard civil defamation trial at the Fairfax Coun

By Danielle Broadway and Akriti Sharma

(Reuters) – Actor Amber Heard said on Monday she would settle defamation claims that were brought against her by ex-husband and fellow actor Johnny Depp, ending years of legal wrangling over dueling claims of abuse during their marriage.

In an Instagram post, Heard said the decision to settle with Depp was “very difficult” and followed “a great deal of deliberation.” The actress said this was “not an act of concession.” In June, Depp had won a mulimillion-dollar jury verdict for his defamation suit against Heard.

Depp’s co-lead trial counsel, Ben Chew and Camille Vasquez, said he would receive a payment from Heard’s insurers of $1 million and Depp has pledged to donate the funds to charity.

Chew and Vasquez, said: “We are pleased to formally close the door on this painful chapter for Mr. Depp, who made clear throughout this process his intent to bring the truth to light.”

Depp and Heard sued each other in 2022 for defamation, each claiming they were abused before and during their roughly two-year marriage.

Following a six-week televised trial full of graphic testimony, a seven-person jury ruled in June that Heard defamed Depp, and the “Pirates of the Caribbean” star was awarded $10.35 million. The jury also determined that Heard was defamed, awarding her $2 million.

In July, Heard filed an appeal to the Virginia jury’s decision that she defamed Depp when she claimed in a newspaper opinion piece that she was a survivor of sexual violence.

Representatives for Heard did not respond to requests for additional comment after the “Aquaman” star posted her decision on Instagram.

“It’s important for me to say that I never chose this,” Heard said in her post. “I defended my truth and in doing so my life as I knew it was destroyed. The vilification I have faced on social media is an amplified version of the ways in which women are re-victimised when they come forward,” she wrote.

Heard went on to say she finally has the opportunity to “emancipate” herself from something she tried to leave over six years ago.

In the post, she also said she had lost faith in the American legal system and favors the UK legal system as more “robust,” “impartial” and “fair”. Heard also blasted the U.S. media, saying it favored “popularity and power” over “direct evidence.”

“In the interim I was exposed to a type of humiliation that I cannot re-live,” Heard said. “Even if my US appeal is successful, the best outcome would be a re-trial where a new jury would have to consider the evidence again. I simply cannot go through that for a third time.”

Elon Musk must leave the leadership of Twitter: users have spoken

$1.7M of Bitcoin tied to QuadrigaCX reawakens after years of dormancy