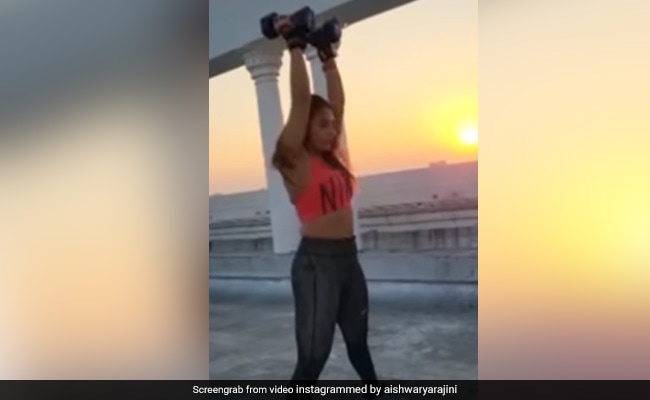 Aishwarya Rajinikanth in a still from the video. (courtesy: aishwaryarajini)

Aishwaryaa Rajinikanth is giving us major fitness goals – one post at a time. The filmmaker, who has been sharing frequent workout posts on her Instagram profile – added another one. In the video, she can be seen working out with weights on a yoga mat. She can also be seen running in a segment of the video. She captioned her post: “Health is truly your biggest wealth… Eat cleaner, hydrate better, always feed the inner dreamer. Stronger, leaner but never meaner.” She added the hashtag #worldhealthday” to her post.

Last week, she shared a post workout picture and she wrote: “Music to set the mood muscle mode on with the movement and always live in the moment so what’s your fav song today? Workout no matter what.”

When we said Aishwaryaa Rajinikanth is giving us major fitness goals, we legit meant it. Last month, she shared a Monday Motivation post and wrote: “Back to working out after more than a month again… The body I hear screaming in pain …Post session I slid against the wall .. Cautious that I don’t fall…Wait (weight) and I smile. I know I can run the mile. I’ve done this before. Strength I draw from my heart and core… None of us know our true power. Need to dig in and pull out of the feared cover… Sweat sweat, you’ll never regret… Glow and grow. Let all the positivity flow.”

Aishwaryaa Rajinikanth had a rough beginning this year in terms of health. She was admitted to a hospital after experiencing fever and vertigo. Before that she tested positive for COVID-19. However, she recovered and has constantly been working towards a healthier life. The posts above are proof.

Earlier this year, she and Dhanush announced separation in a joint statement. Aishwaryaa and Dhanush worked together in 3, which marked the latter’s directorial debut. The psychological thriller featured a song called Kolaveri Di, that became insanely popular. The two are parents to sons Yatra and Linga. Aishwaryaa Rajinikanth will soon make her Hindi directorial debut with a film titled Oh Saathi Chal.

See also  China’s COVID outbreak fueled by Stealth Omicron; here’s what it is and symptoms to watch out for