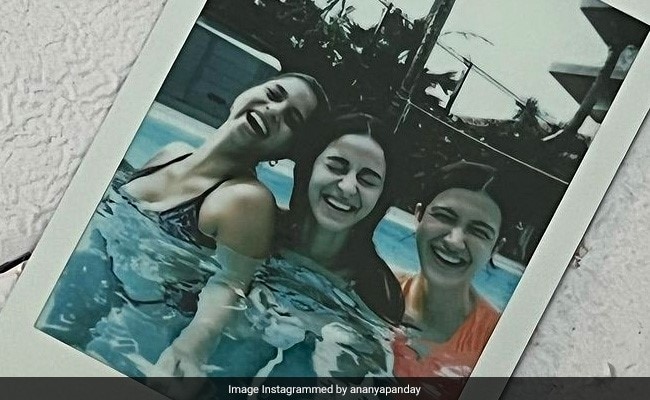 Suhana Khan, Ananya Panday, and Shanaya Kapoor had a fun day today as they celebrated International Women’s Day. The BFFs enjoyed a pool day with Ananya’s sister Rysa Panday. Ananya Panday and Shanaya Kapoor shared the photos and videos on social media and all they promise is, fun. Sharing the photo and the video, Ananya Panday wrote, “where there is a woman, there is magic grateful to be surrounded by so much magic #WomensDayEveryday.” In the video, Ananya, Suhana, Shanaya, and Rysa are posing underwater. Suhana Khan commented, “Love uuuu,” followed by an array of red heart emojis. Shanaya’s mother Maheep Kapoor left a red heart emoji in the comment section.

Check out the video here:

Shanaya Kapoor also shared photos and video from the pool day and captioned it as “pool day with my favs!”. Suhana Khan commented, “Yayyy,” followed by a red heart emoji.

Suhana Khan, Ananya Panday, and Shanaya Kapoor have been friends since childhood. They often hang out together and their photos and videos go viral on the web. While Ananya has already made her acting debut, Shanaya Kapoor will be making her debut with Karan Johar’s Bedhadak. The film is being directed by Shashank Khaitan and will also have Lakshya and Gurfateh Pirzada.

Sharing the first look of Bedhadak, Shanaya Kapoor had written, “A new era of love is filled with passion, intensity & boundaries that will be crossed! Presenting #Bedhadak where I get to share the screen with my suave co-actors, Lakshya & Gurfateh – directed by the one and only Shashank Khaitan!”

On the work front, Ananya Panday was last seen in Gehraiyaan.

Next generation of bowlers can forget about taking 1000 international wickets: Ashwin | Cricket News