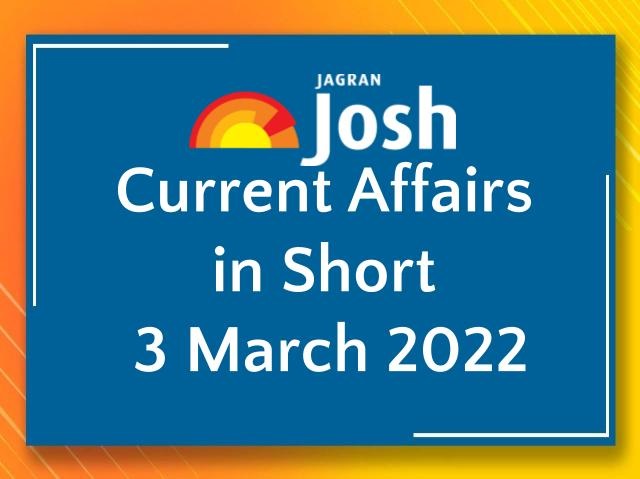 • Prime Minister Modi spoke to the President of Russia Vladimir Putin over the phone on the Ukraine conflict.

• The telephonic conversation between the two leaders pertained to the ongoing conflict in Ukraine, particularly in Kharkiv where many Indian students are stuck.

• According to a statement by PMO, the two leaders discussed the safe evacuation of the Indian Nationals from the conflict zone.

• It was the second telephonic conversation between PM Modi and Putin. Prime Minister had last spoken to the Russian President on February 25, 2022, where he had called for an immediate cessation of violence in Ukraine.

• However, SWIFT spared two financial institutions in Russia as they are the key to transactions for EU energy imports.

• The exemption of the two banks by the EU has underscored the bloc’s reliance on Russian Energy and Russia’s two financial institutions’ role in managing the payments for that business.

• The Election Commission of India has ordered a re-poll in 12 polling stations of 5 constituencies in Manipur where the polling for assembly elections took place on February 28, 2022.

• The re-poll in Manipur will be on March 5, 2022, from 7 AM to 4 PM. The proposal for the re-poll was recommended on the facts and information received and reported from respective Returning Officers.

• One of the main reasons for the consideration of re-polling was connected to the damage of EVMs after the poll.

Prime Minister Modi interacts with students who returned from Ukraine

• Prime Minister Modi interacted with the students in Varanasi who returned to India from Ukraine.

• The Indian students shared their experience with him and were from Varanasi as well as the other parts of Uttar Pradesh.

• A total of 17,000 Indians have left Ukraine and flights under Operation Ganga have also been increased to facilitate the evacuation of remaining students in the war-torn country.

• Roman Abramovich, Russia’s businessman, has decided to sell Chelsea. The news was shared by the Chelsea Twitter handle.

• As per Abramovich, he will not be asking to be repaid 1.5 billion pounds in loans he has granted the club during 19 years of injecting cash to elevate the team into one of the most successful in Europe.

• He added that the sale of Chelsea Football Club will not be fast-tracked but will follow due process.

• Abramovich has instructed his team to set up a charitable foundation where all the net proceeds from the sale will be donated. The foundation will be for the benefit of all the victims of war in Ukraine.