General Electric: Is It Different This Time Around For The Industrial Giant?


This article was written exclusively for Investing.com

On Oct. 1, 2018, Larry Culp took over as chief executive officer of General Electric (NYSE:). Since the close of trading that day, GE stock has declined 20%. 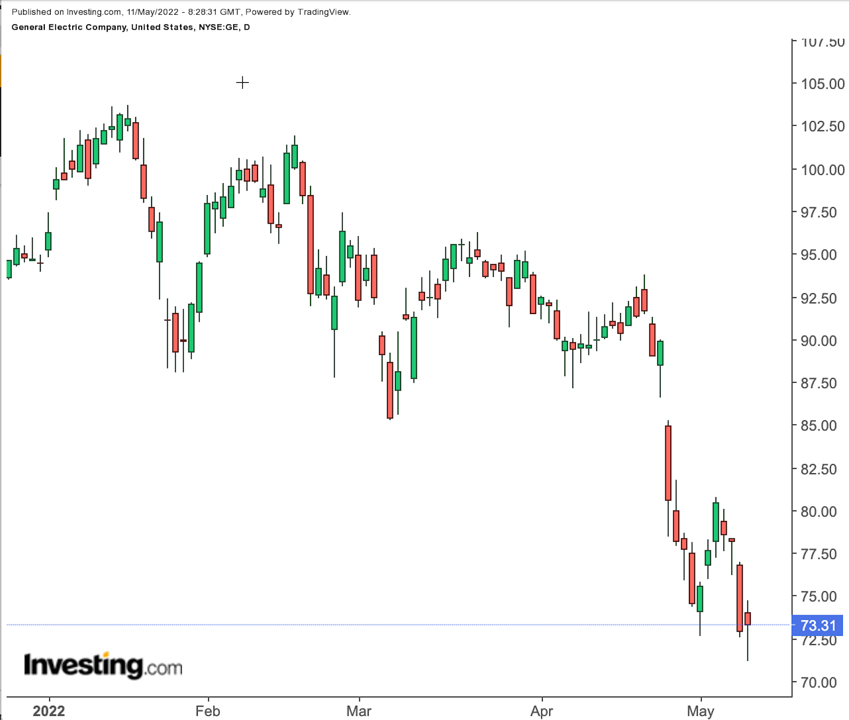 There are a number of possible explanations for the stock’s poor performance. One might be that Culp simply is a poor CEO. That seems unlikely, however.

Culp, after all, had roaring success with Danaher (NYSE:), which under his leadership was one of the best stocks in the entire market. On the day GE announced Culp would replace John Flannery in the top job, GE stock gained 7%, a move that added roughly $8 billion to its market capitalization. Investors then believed Culp was an excellent manager; and even with GE stock struggling now, we don’t have much evidence to suggest otherwise.

In theory, it could be possible that the board of directors of the Boston-based industrial mega-cap got in Culp’s way. But that is absolutely untrue: Culp has been given free rein. Costs have been cut, and executives replaced. GE Biopharma was sold for $21 billion; the aircraft leasing business went for $30 billion. The company now plans to break into three parts. It’s hard to think of a bigger move than a breakup of GE, a once-storied conglomerate that less than 20 years ago produced everything from appliances to lightbulbs to television programs.

So a presumably good CEO was given carte blanche to remake his company in the way he sees fit. Clearly, at least as far as General Electric stock is concerned, that strategy hasn’t worked.

That leaves two potential explanations. One suggests the stock is a buying opportunity now; the other sees GE as dead money.

The Case For GE Stock

The core argument for GE stock at this point is simple: a panicking market is bailing on GE at precisely the wrong time. The entirety of the 20% decline under Culp has come so far in 2022; GE has fallen 22% year-to-date. That YTD performance is worse than the 15% fall (including dividends) of the S&P 500.

Even to a longtime GE skeptic like myself, this argument has some appeal. Culp’s turnaround hasn’t yet shown significant benefits in terms of the fundamentals. But there is good news here. The company is much leaner, in terms of the reach of its overall business and how it runs its individual businesses. GE Healthcare is a leader in its field. The same is true of GE Aviation. GE Power, the legacy of the disastrous acquisition of Alstom, has some holes, but the long-term prospects of the renewable energy portfolio look attractive.

More broadly, we’ve seen this kind of story before, in which a massive company attempts a turnaround, and investors bail just before the efforts finally bear fruit. Procter & Gamble (NYSE:) is a perfect recent example. Coca-Cola (NYSE:) is another.

Indeed, just a few months ago, GE itself was expressing strong optimism about its own turnaround. Guidance given with fourth-quarter in late January suggested free cash flow this year would more than double, with adjusted EPS growing to $2.80-$3.50 against $2.12 in 2021.

Meanwhile, at the Investor Day in March, GE forecast about $7 billion in free cash flow next year. The current market capitalization of $81 billion, against that estimate, suggests a forward P/FCF multiple below 12x—an attractive fundamental metric.

First-quarter earnings last month certainly suggested those targets may not be hit. Culp pointed investors to the low end of the guidance for this year, which, in turn, raises concerns about the 2023 outlook. But the core problem at the moment, at least per GE management, is ongoing difficulties across the supply chain, not anything going wrong within GE itself.

So at this point, even if the 2023 cash flow target gets pushed out a year or two, GE stock still is cheap enough to own below $80. The supply-chain issues will be worked through; more cost cuts will arrive; GE will see further reductions in its interest expense thanks to lower debt. And then the breakup can unlock further value.

Bulls would argue that right now, investors are taking the short-term view, focusing on macroeconomic concerns, supply-chain issues, and falling stock prices across the markets. When that changes, however, the long-term value GE is creating right now will shine through and the stock can soar.

After all, that $7 billion in free cash flow, assuming the company can grow from that point in health care and aviation, suggests a market capitalization as high as $140 billion at a 20x multiple. That’s 75% upside from here. Wall Street isn’t quite as bullish, but the average 12-month price target still suggests over 40% gains. 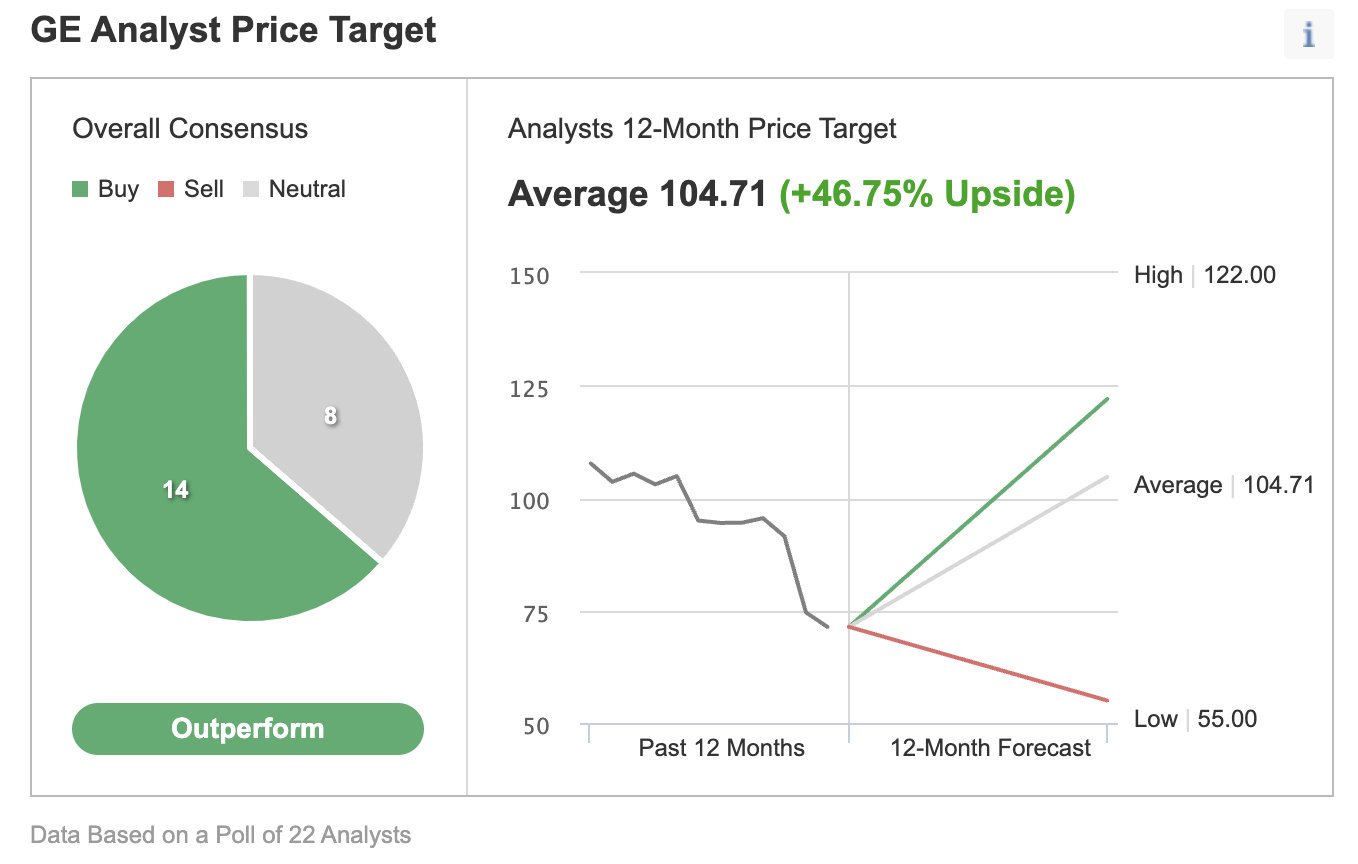 The Case Against GE Stock

To be sure, I’m somewhat sympathetic to the case. I’ve never been a fan of GE stock, but personally, I think this is probably the best risk/reward setup the stock has had in at least a decade.

But there are risks. Broadly speaking, the biggest one is history. GE has made so many promises, for so many years, before Culp and even after Culp. There are always things that go wrong; asset sales that don’t quite measure up to the value bulls hoped to garner; targets that always seem missed.

It’s not just GE’s history, either. We’ve seen the three-way breakup of a major American conglomerate. Hedge fund investors merged Dow Chemical and DuPont solely for the purpose of breaking that company into three units. That breakup—into Dow (NYSE:), Dupont De Nemours (NYSE:), and Corteva (NYSE:)—hasn’t generated the hoped-for returns. In fact, the companies have badly underperformed the broad market.

Meanwhile, Culp certainly has put his imprint on the company—but most of the low-hanging fruit has been harvested. There aren’t that many costs left to cut (if any) post-2023. The same is true in terms of interest savings, and higher rates in the bond market could offset the remaining benefits as GE refinances its current debt over time.

And while GE stock has fallen 22% year to date, the company still has a market capitalization of more than $80 billion, and an enterprise value (which includes debt) well past $100 billion.

To create upside from that level, GE still has to grow—whether it does so together or apart. And, even assuming short-term issues get fixed, that’s far from guaranteed. GE has been promising that growth for years; it hasn’t arrived in any consistent way.

Over that entire stretch of underperformance, GE executives promised a turnaround was just around the corner—and GE shareholders bet on that turnaround. Every single one has been disappointed.