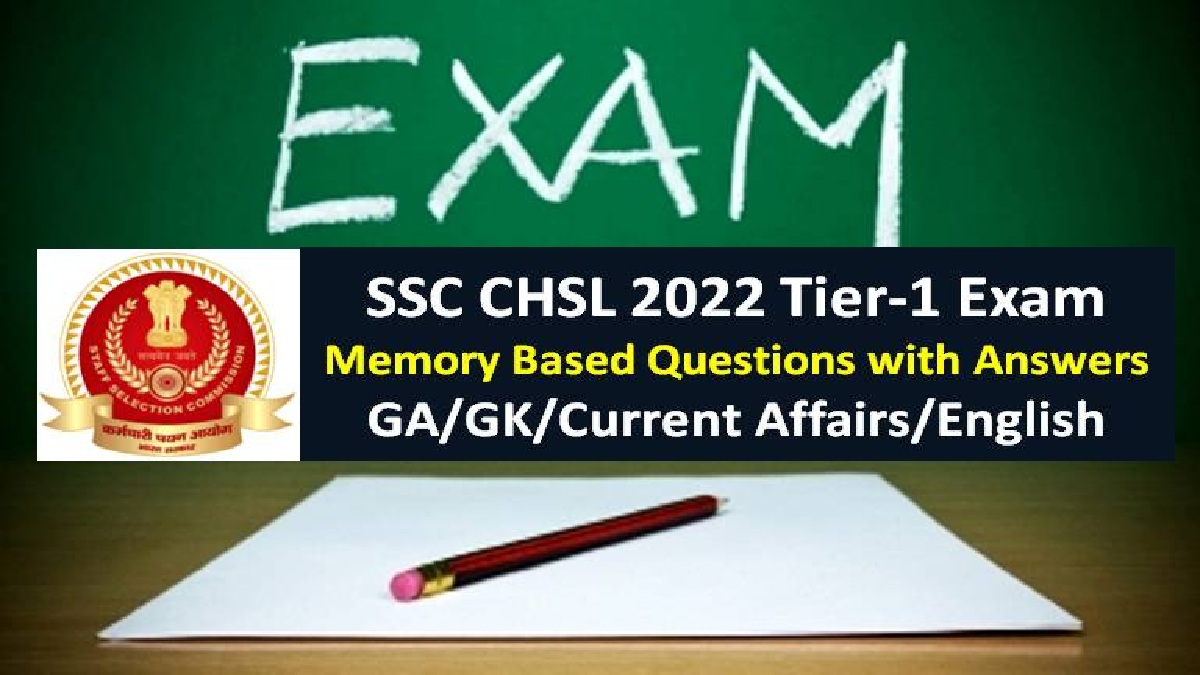 SSC CHSL 2022 Tier-1 Exam Memory Based Questions: SSC CHSL 2021-22 Exam (Tier-1) has been commenced from today, i.e., 24th May 2022 across different examination centres in India. In this article, we are going to share the important memory based questions as per the feedback received by the candidates who have appeared for SSC CHSL Tier-I 2022 Exam. Candidates are advised to definitely cover these questions for scoring high marks in the Exam.

Let’s have a look at the Important Questions that are being covered in the SSC CHSL 2022 Tier-1 Exam:

Answer: Lajja (Shame) is a novel in Bengali by Taslima Nasrin, a writer of Bangladesh.

2. Which colour card is given to players for Misbehaving in a football match?

Answer: In soccer, yellow cards and red cards are used discipline players for general misconduct and bad behaviour during the game.

Answer: Biosphere reserves are sites established by countries and recognized under UNESCO’s Man and the Biosphere (MAB) Programme to promote sustainable development based on local community efforts and sound science.

4. “Playing to win” is the Autobiography of:

5. Question related to a War in Medieval History

6. Who is eligible for Padma Shri, Padma Bhushan and Padma Vibhushan?

Answer: Synonyms – give up, vacate, resign

11. Idioms and Phrases: To sail in the same boat

Answer: To be in the same bad, difficult or unpleasant situation, to have the same problem

Answer: In the Dadasaheb Phalke Award 2022 the best actor award has been given to Ranveer Singh for the “83” movie, and the title of best actress in the event is owned by Kriti Sanon for the “Mimi” movie.

15.  Hornbill Festival is celebrated in which State?

Answer: Article 25 says “all persons are equally entitled to freedom of conscience and the right to freely profess, practice, and propagate religion subject to public order, morality and health.” Further, Article 26 says that all denominations can manage their own affairs in matters of religion.

Answer: 50th Statehood Day of Tripura, Meghalaya, and Manipur was celebrated on 21 January 2022

23. Who orders joint session of Lok Sabha and Rajya Sabha in absence of Speaker and Deputy Speaker?

Answer: Madurai Shanmukhavadivu Subbulakshmi (16 September 1916 – 11 December 2004) was an Indian Carnatic singer from Madurai, Tamil Nadu. She was the first musician ever to be awarded the Bharat Ratna, India’s highest civilian honour.

Answer: Sodium is a chemical element with the symbol Na (from Latin natrium) and atomic number 11. It is a soft, silvery-white, highly reactive metal.

27. Dance that is performed in the temple in south India

Answer: The planets Mercury, Venus, Earth, and Mars, are called terrestrial because they have a compact, rocky surface like Earth’s terra firma. The terrestrial planets are the four innermost planets in the solar system.

Answer: M. Venkaiah Naidu – The vice president of India (currently, Venkaiah Naidu) is the ex-officio Chairman of the Rajya Sabha, who presides over its sessions.

Answer: Nitromethane (CH3NO2) is an important organic chemical raw material with a wide variety of applications as well as one of the most common pollutants