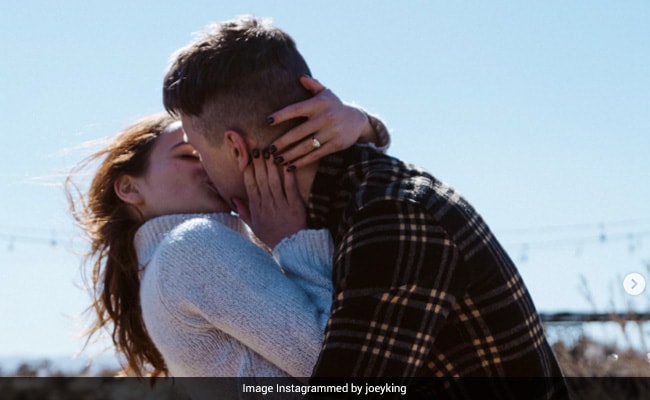 Actor Joey King, known for her roles in the ‘Kissing Booth’ franchise and ‘The Act’, recently revealed that she has gotten engaged to her boyfriend, Steven Piet.

The 22-year-old actor got engaged to Piet on February 2, she revealed on Instagram on Tuesday, sharing photos from the proposal.

“I never knew happiness could be so powerful that it can take the air from your lungs, overwhelming every part of you that you can’t help but feel your eyes well from the undeniable joy. I never knew that a persons presence and heart could feel like a real home. I never knew love could be so unquestionably beautiful. I never knew until you. The date was 2/2/22 when you asked me to marry you and made me the luckiest lady alive. I love you more than an Instagram caption could ever do justice. Hanging out with you forever sounds like a real dream, so let’s do it,” she wrote alongside a series of beautiful pictures.

On his page, Piet wrote, “The weather was less than perfect. Cold. Windy. Perfectly imperfect to ask my best friend to spend a lifetime together. A lifetime of incredibly safe and vulnerable conversations. Holding hands on silent cab rides home, exhausted from great food and red wine. And oh, the laughter. The uncontrollable laughter.”

“You’ve unlocked a dimension of love in me that I never knew existed,” he added.

Piet served as a co-executive producer on King’s 2019 Hulu limited series ‘The Act’, in which she played the real-life Gypsy Rose Blanchard, reported People magazine.

Back in September 2019, Piet and King went public with their romance, stepping out for a fun date night at a Cinespia’s screening of ‘Harry Potter and The Chamber of Secrets’ in Los Angeles.

King, who previously dated ‘Kissing Booth’ costar Jacob Elordi before breaking up in 2018, said in 2020 that she would never date another actor again.

“No. I couldn’t. I think that it’s awesome to date someone in your field, who gets it, but doing the same exact thing as somebody is tough. It’s really tough,” she said on SiriusXM’s Howard Stern Show at the time.

1 Million Have Fled Ukraine Since Russia’s Invasion, the Swiftest Exodus of Refugees This Century