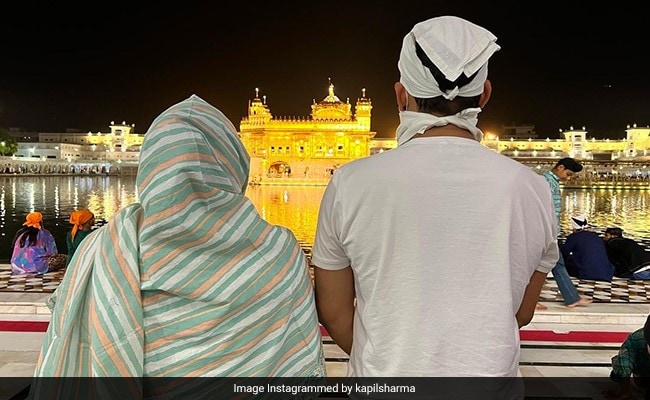 On Monday, Kapil Sharma shared photos from his Amritsar trip. The first photo is of the Golden Temple and the second photo has Kapil and his wife Ginni Chatrath praying at the Golden Temple. Sharing the photos at Harmandir Sahib, Kapil Sharma wrote, “blessings from Shri Darbar sahib #amritsar #darbarsahib #punjab #gratitude.” Kapil Sharma celebrated his birthday on April 2 and many celebrities including Akshay Kumar had wished him. Kapil was reportedly in Himachal Pradesh with his family and friends on his birthday.

On Kapil Sharma’s birthday on April 2, Akshay Kumar had wished him in a funny and unique way. He had shared a candid photo with Kapil and tweeted, “I hope iss saal tere Lokhandwala hi nahi Bandra mein bhi bahot saare ghar ho. Always wishing you the best in life brother, Happy birthday @KapilSharmaK9.” (I hope this year you have houses not only in Lokhandwala but in Bandra also)

Kapil Sharma got married to Ginni Chatrath in 2018 and they are now parents of two children- daughter Anayra and son Trishaan.

In September, Kapil Sharma had talked about battling depression and how his wife had helped him. In a segment for Fever FM’s Bounce Back Bharat Fest, Kapil had said, “I think that becoming the best in your job is not difficult but maintaining that position for a period of time is. There are politics, people pulling your leg. So, at that time, I stopped trusting people. They would say something on my face and something else behind my back. I shut my show down even though nobody asked me to do so. But my family gave me strength at the time, especially my wife, Ginni. She knew everything about what was happening in my life. No one else did. My mother knew nothing about mental illnesses and depression, she is a woman from a small village.”

On the work front, Kapil Sharma will be seen in a movie directed by Nandita Das, in which, he plays the role of a food delivery guy. The untitled film also has Shahana Goswami.

See also  Did you know Sushant Singh Rajput’s voice was dubbed in his last film ‘Dil Becharra’ after his passing away ? | Hindi Movie News