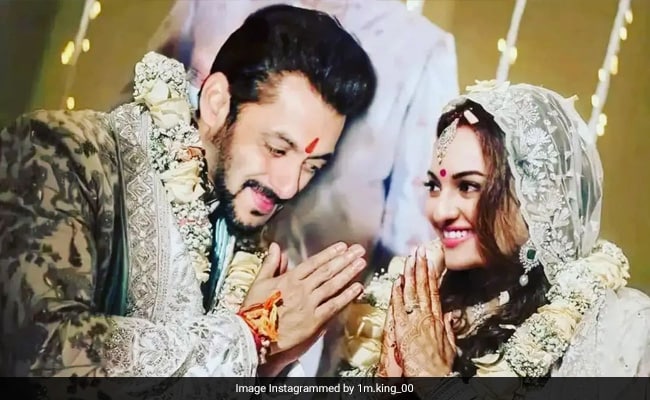 An edited image of Salman and Sonakshi (courtesy: 1m.king_00)

New Delhi: It seems that one morphed picture of Salman Khan and Sonakshi Sinha wasn’t enough for the Internet. A second photo which appears to show the Dabangg co-stars in wedding finery is going viral – except that this time, the original picture is easy to identify. Not only is the second fake wedding photo of Salman and Sonakshi as obviously photoshopped as the first, the faces of the two actors have been superimposed over those of Varun Dhawan and his wife Natasha Dalal. Yes, you read that right, the original photo is of Varun and Natasha, who married in January 2021.

Here have a look at the edited picture of Salman Khan and Sonakshi Sinha:

Check out Varun and Natasha’s wedding picture. Scroll to the third picture in the post below:

A few days ago, a picture of Salman Khan and Sonakshi Sinha, dressed as a new bride and groom, was doing the rounds on social media platforms. The photoshopped pictures have been offered up as evidence that the stars have married secretly. Reacting to the first viral image, Sonakshi Sinha lashed out, replying to a comment on Instagram: “Are you so dumb that you cannot tell the difference between a real and a morphed picture?”

For the unversed, Sonakshi Sinha debuted opposite Salman Khan in Abhinav Kashyap’s Dabangg, also co-starring with him in the two sequels that followed.

Meanwhile, Sonakshi Sinha was recently in the news after reports that a non-bailable warrant had been issued against her for a fraud case dating back to 2019. Sonakshi, who is accused of having been paid over Rs 30 lakh for an event which she then failed to attend, said in a statement: “There have been rumours of a non bailable warrant issued against me floating in the media, without any verification from any authorities since a few days now. This is pure fiction and the work of a rogue individual trying to harass me. I request all media houses, journalists and news reporters not to carry this fake news as it is playing into this individual’s agenda to gain publicity.”

Sonakshi Sinha was last seen in Bhuj: The Pride Of India.

Two Americans, including one member of the 'CITGO6,' released from prison in Venezuela