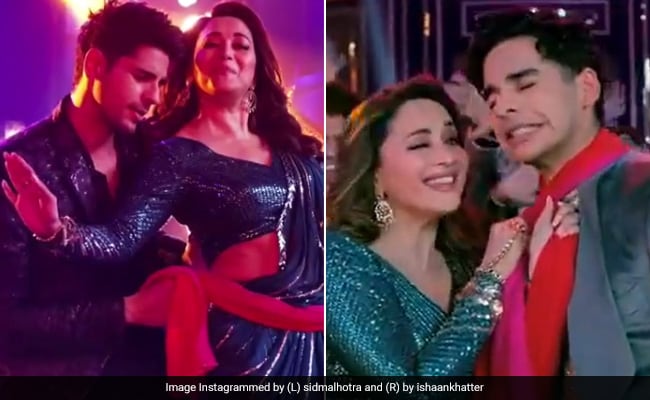 So Sidharth Malhotra and Ishaan Khatter had the honour of sharing the dance floor with Madhuri Dixit and the results were amazing. The actors danced to the song Dupatta Mera from Madhuri Dixit’s web-series The Fame Game. Sharing a video of the dance, Sidharth Malhotra wrote in his caption: “No matter who you are, when Madhuri dances, you dance with her. The Fame Game series, now streaming on Netflix.” An excited Sidharth Malhotra said this in the video, “All I can say is hat I have been a big fan watching her on the big screen, and it was very exciting to see her in the trailer and looking forward to the show. It’s actually very surreal. I’ve seen Madhuri Ma’am perform in these massive songs, the expression queen. I never thought we would come together for a dance. So thank you Netflix, you’ve made a young boy’s dream come true.”

Ishaan Khatter shared the video of his dance with the actress and he captioned it: “Cross that one off the bucket list! Third wheeling with Madhuri ji and her dupatta. The Fame Game series, now streaming on Netflix.” Ishaan says in the video, “It’s a bucket list item to dance with Madhuri Ma’am. It was thrilling, breathtaking and it was very enjoyable.”

Check out the video here:

The Fame Game, also starring Sanjay Kapoor and Manav Kaul, as been directed by Bejoy Nambiar and Karishma Kohli and it has been produced by Karan Johar. The Fame Game series began streaming from February 25 on Netflix.

See also  LIC IPO Gets Sebi’s Nod; to Have Special Quota for Policyholders

Five Reasons Why Ukraine is Standing Tall Despite Offensive