Shares of the leading solar products installer Sunrun (NASDAQ:) are down close to 18% so far this year and 47.5% in the past 52 weeks. By comparison, the Invesco Solar ETF (NYSE:) has lost 2.7% since January and 16.1% over the past year. 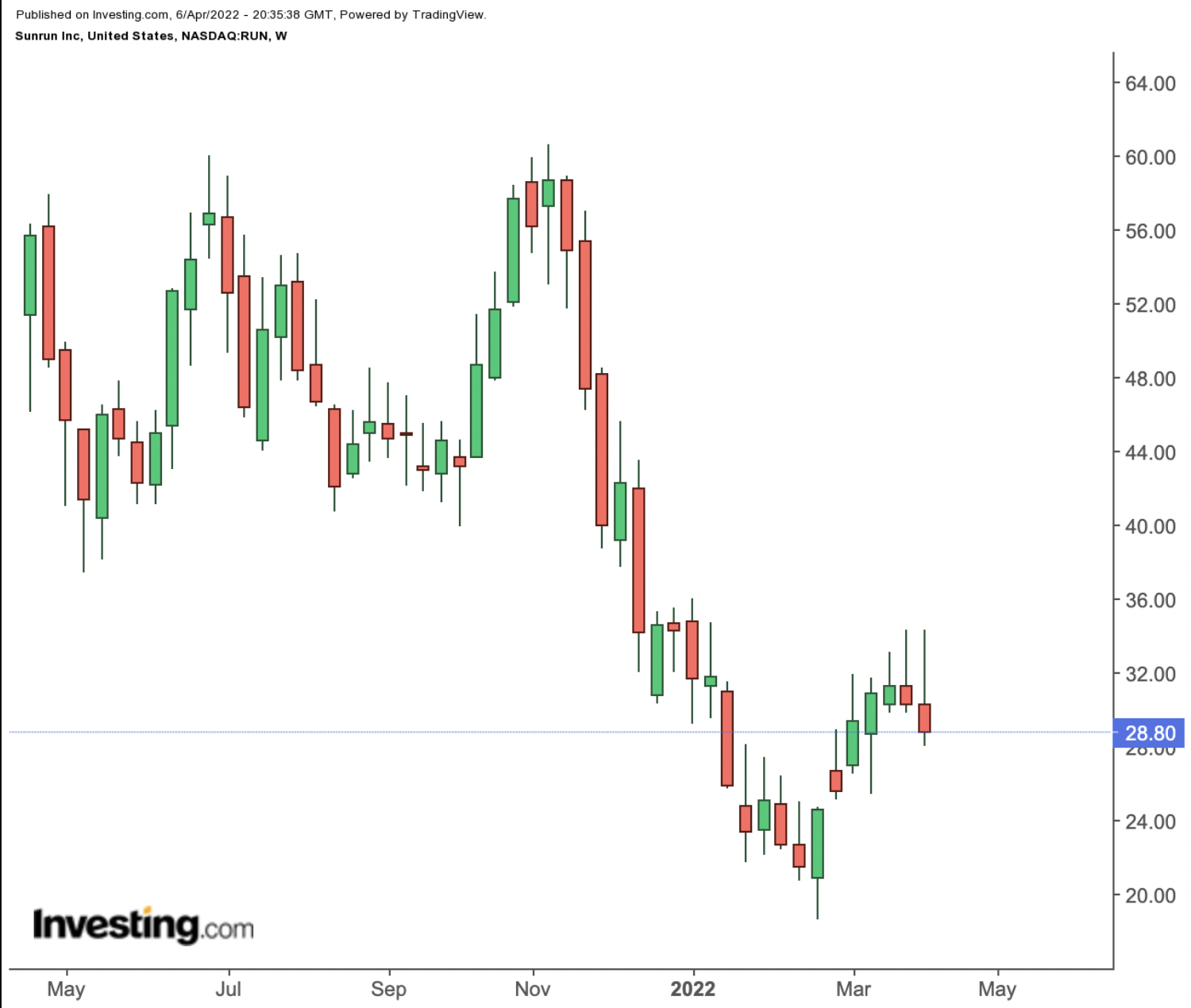 Despite the decline in share price, Sunrun is among the top residential solar panel providers in the US. In October 2020, it acquired competitor Vivint Solar. Thus, the company has seen volume growth in panel installations, especially in new homes, as well as in battery installations.

Therefore, with a market capitalization of $5.9 billion, Sunrun is likely to enjoy many more quarters of growth.

Investors have also been excited about Sunrun’s upcoming partnership with Ford (NYSE:) on home energy storage solutions. Ford’s F-150® Lightning™ truck will be used to “power homes and help accelerate the adoption of zero-carbon solar energy… Sunrun [will be] the preferred installer for F-150 Lightning home charging solutions in select service areas…”

Nonetheless, Sunrun added close to 30,000 new customers during the quarter, and the total number of customers went over 660,000. As a result, the annual recurring revenue was $851 million.

“The Sunrun team delivered record volumes in 2021, having added over 110,000 customers in the year representing 31% growth in new installations…”

The clean energy company is expected to report Q1 metrics on May 4. RUN’s stock price is likely to be choppy around that date.

Next Move In RUN Stock?

Sunrun shares have an “outperform” rating among the 19 analysts polled via Investing.com and the 12-month average target price stands at $49.53, implying an increase of more than 71% from current levels. 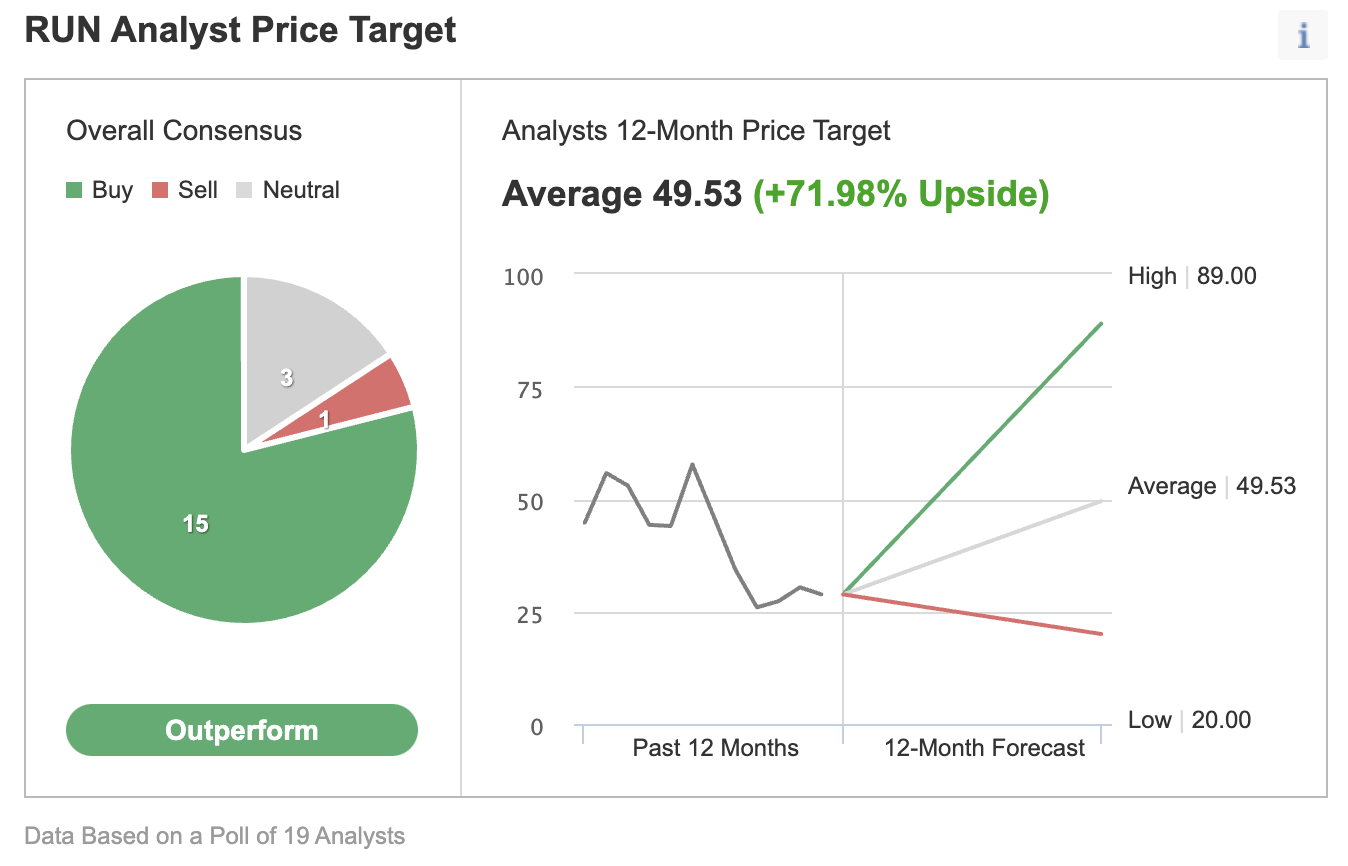 However, according to a number of valuation models such as P/E, P/S or terminal values, the average fair value for RUN stock on InvestingPro stands at $31.79. 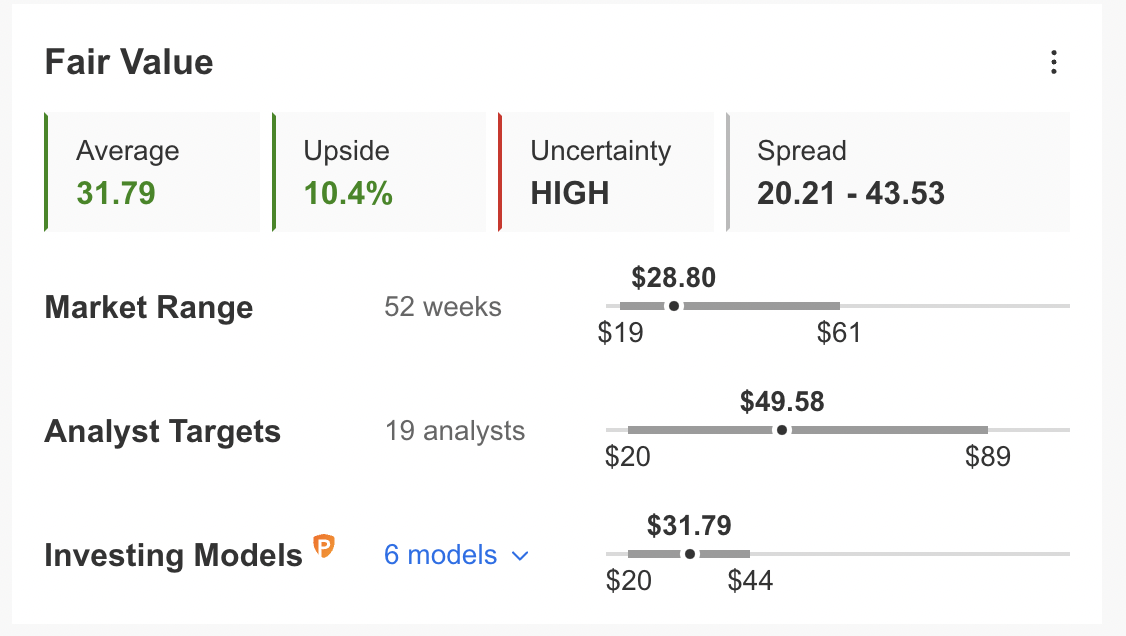 Put another way, valuation models expect a price increase of about 12%.

Readers who watch technical charts might be interested to know that the choppiness in RUN stock will likely continue in the coming weeks.

Our expectation is for Sunrun to trade in a wide range between $25 and $30, and build a base. Then, a new up leg could start, possibly in the second half of the year.

Sunrun bulls who are not concerned about short-term volatility could consider investing now. Their target price would be $31.79, as suggested by various valuation models.

Alternatively, investors might consider buying an exchange-traded fund (ETF) that has RUN stock as a holding. Examples include:

Finally, those who are experienced with options could also consider selling a cash-secured put option in Sunrun stock—a strategy we regularly cover. As it involves options, this setup is not appropriate for all investors.

Such a bullish trade could especially appeal to those who want to receive premiums (from put selling) or to possibly own RUN shares for less than their current market price at $28.20.

This strategy may be appropriate when investors are slightly bullish or neutral on Sunrun stock at this time. Selling cash-secured put options on RUN would generate income as the seller receives a premium.

For instance, if investors sold the $25 strike put that expires on Aug. 19, they could collect about $3.45 in premium. Therefore, the maximum return for the seller on the day of expiry would be $345, excluding trading commissions and costs, if the option expires worthless.

But if the put option is in the money (meaning Sunrun stock is lower than the strike price of $25) any time before or at expiration on Aug. 19, this put option can be assigned.

The put seller would then be obligated to buy 100 shares of RUN at the put option strike price of $25 for a total of $2,500 per contract.

If the put seller gets assigned Sunrun shares, the maximum risk is similar to that of stock ownership. In other words, the stock could theoretically fall to zero. But this risk is partially offset by the premium received ($345 for 100 shares).

Cash-secured put selling is a moderately more conservative strategy than buying shares of a company outright at the current market price. This can be a way to capitalize on any choppiness in Sunrun stock in the coming weeks, especially given the uncertainty around how broader markets and growth shares may trade.

Investors who end up owning RUN shares as a result of selling puts could further consider setting up covered calls to increase the potential returns on their shares. Thus, selling cash-secured puts could be regarded as the first step in stock ownership.

Shares of Sunrun have come under significant pressure in the past year but Wall Street is expecting better days ahead as the investors’ appetite for alternative energy shares increases.

Therefore, interested investors with a two- to three-year time horizon could consider buying the dip or put together an options strategy. Meanwhile, RUN stock could also become an acquisition target.