Shareholders of the global financial powerhouse Citigroup (NYSE:) have seen the value of their investment decrease by nearly a third over the past 12 months and 12.6% so far this year. By comparison, both the and the are down about 16.5%. 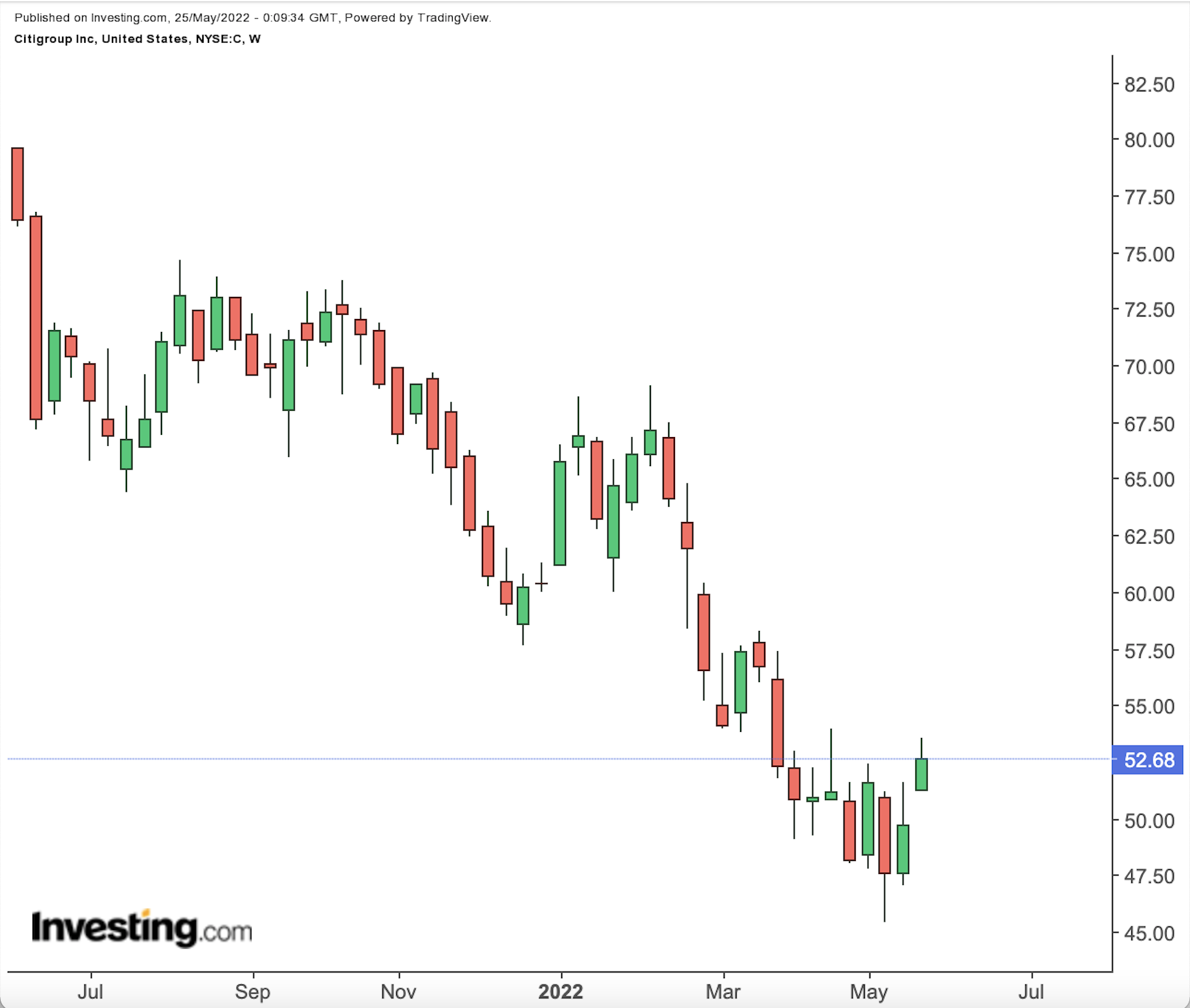 The banking giant has been making headlines following Berkshire Hathaway’s (NYSE:) (NYSE:) disclosure that it acquired 55 million shares in C.

Warren Buffett has long been a devoted fan of financial shares, which also provide stable dividends. BRKb stock has returned more than 3.5% since January. Analysts concur that the current restructuring efforts led by Jane Fraser, Citigroup CEO, might have positively affected Berkshire Hathaway’s decision to become a shareholder.

For instance, the global bank is leaving more than a dozen retail markets across Asia and Europe. Wall Street now expects Citigroup to become a leaner organization, concentrating on segments, like wealth management, with higher margins and a more stable contribution to the bottom line.

Citigroup released on Apr. 14. Revenue decreased 2% year-over-year to $19.2 billion. Q1 net income was $2.02 per diluted share, compared with $3.62 per diluted EPS, in the quarter in the previous year. The decline was a result of “higher cost of credit, higher expenses and the lower revenues.”

“We returned $4 billion to our shareholders during the first quarter and we now have about 6% fewer common shares outstanding than we did a year ago. While we are making necessary investments in our infrastructure, risk and controls and our businesses, we remain committed to improving our returns over the medium term.”

On a final note, among the leading US banking giants, Citigroup has the highest exposure to Russia. Management is currently in talks to sell its Russian consumer division.

What To Expect From Citigroup Stock

Among 27 analysts polled via Investing.com, C stock has an “outperform” rating, with an average 12-month price target of $65.99. Such a move would suggest an increase of around 25% from the current price. The target range stands between $53 and $95. 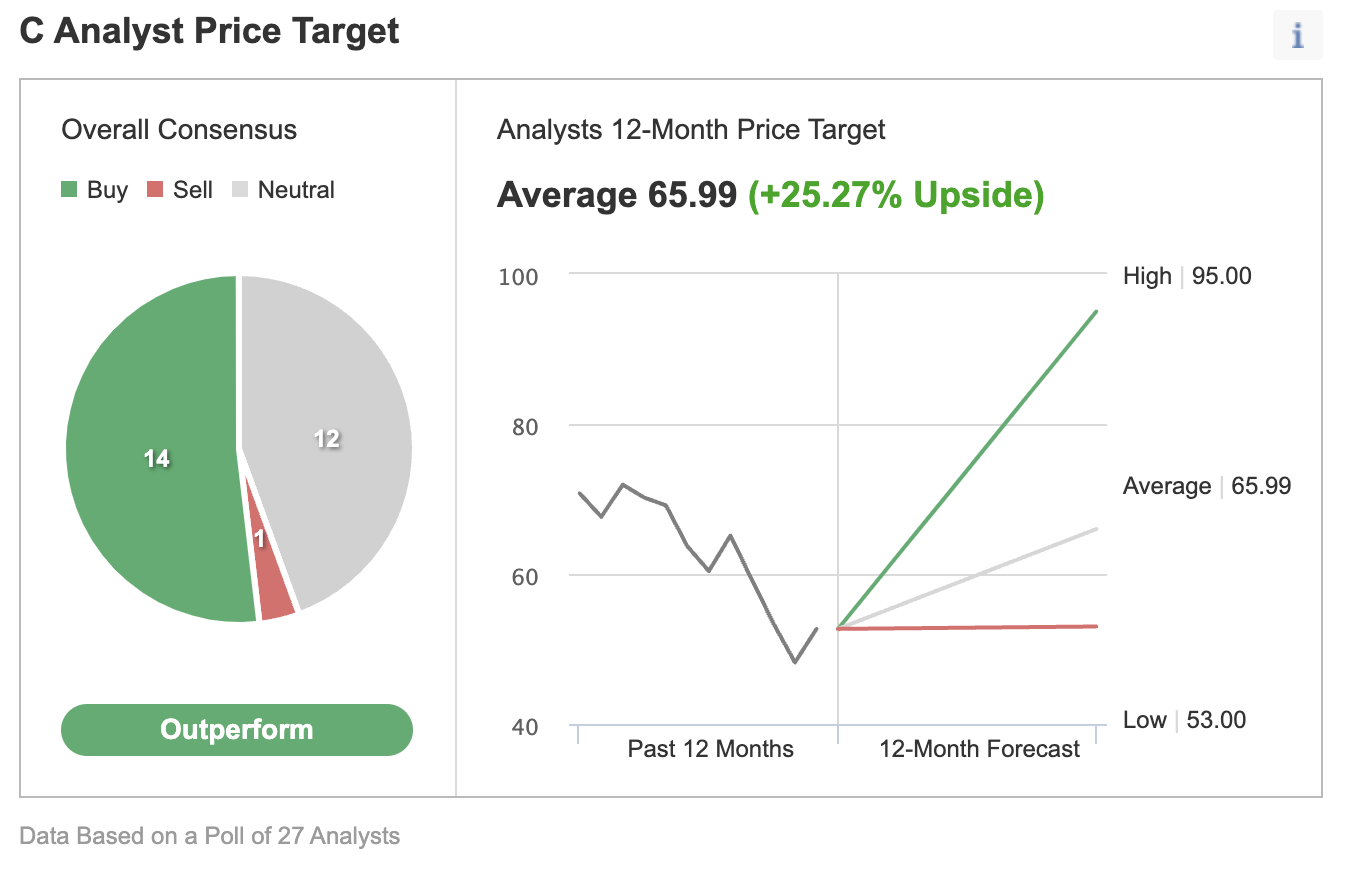 Similarly, according to a number of valuation models, such as P/E or P/S multiples or terminal values, the average fair value for Citigroup stock at InvestingPro stands at $71.64. 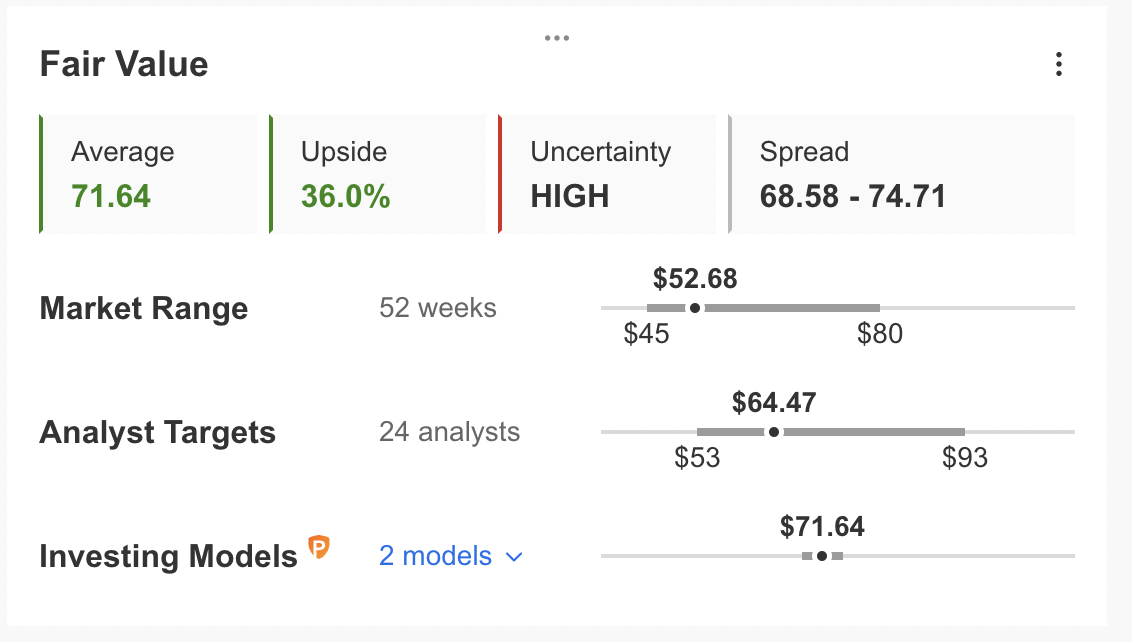 In other words, fundamental valuation suggests shares could increase around 36%.

As part of the short-term sentiment analysis, it would be important to look at the implied volatility levels for C options as well. Implied volatility typically shows traders the market’s opinion of potential moves in a security like Citigroup, but it does not forecast the direction of the move in C shares.

Our expectation is for Citigroup to build a base between $49 and $52 in the coming weeks. Afterwards, C shares could potentially start a new leg up

Investors who are not concerned with daily moves in Citigroup price and who believe in its long-term potential could consider investing in C stock now. They could expect the shares to make a move toward $65.99, as suggested by analyst forecasts.

Those who are experienced with options could also consider selling a cash-secured put option in C stock—a strategy we regularly cover. As it involves derivatives, this setup will not be appropriate for all investors.

Such a bullish trade could especially appeal to those who want to receive premiums (from put selling) or to possibly own C shares for less than their current market price of $52.10.

A put option contract on C stock is the option to sell 100 shares. Cash-secured means the investor has enough money in his or her brokerage account to purchase the security if the stock price falls and the option is assigned. This cash reserve must remain in the account until the option position is closed, expires or is assigned, which means ownership has been transferred.

Let’s assume an investor wants to buy C stock, but does not want to pay the full price of $52.10 per share. Instead, the investor would prefer to buy the shares at a discount within the next several months.

One possibility would be to wait for C stock to fall further, which it might or might not do. The other possibility is to sell one contract of a cash-secured C put option.

So the trader would typically write an at-the-money (ATM) or an out-of-the-money (OTM) put option and simultaneously set aside enough cash to buy 100 shares of the stock.

Let’s assume the trader is putting in this trade until the option expiry date of June 17. As the stock is $52.10 at time of writing, an OTM put option would have a strike of $50.

So the seller would have to buy 100 shares of C at the strike of $50 if the option buyer were to exercise the option to assign it to the seller.

Assuming a trader would enter this cash-secured put option trade at $52.10 now, at expiration on June 17, the maximum return for the seller would be $145, excluding trading commissions and costs.

The seller’s maximum gain is this premium amount if C stock closes above the strike price of $50. Should that happen, the option expires worthless.

The break-even point for our example is the strike price ($50) less the option premium received ($1.45), or $48.55. This is the price at which the seller would start to incur a loss.

Cash-secured put selling is a moderately more conservative strategy than buying shares of a company outright at the current market price. This can be a way to capitalize on the choppiness in C stock in the coming weeks.

Investors who end up owning C shares as a result of selling puts could further consider setting up covered calls to increase the potential returns on their shares. Thus, selling cash-secured puts could be regarded as the first step in stock ownership.

Interested in finding your next great idea? InvestingPro+ gives you the chance to screen through 135K+ stocks to find the fastest growing or most undervalued stocks in the world, with professional data, tools, and insights. Learn More »

Uvalde school shooting: What we know about the victims

The best pet-friendly hotels in the US

‘There seems to be little relief in sight’: More than half of Americans are living paycheck to paycheck, making them more vulnerable to recession