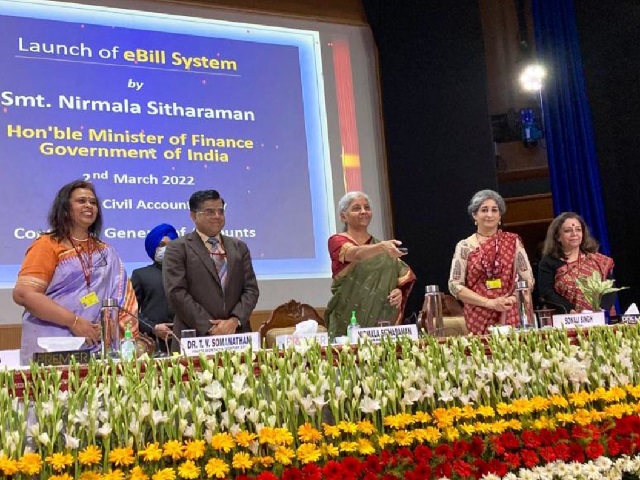 E-billing process: The Union Finance Minister Nirmala Sitharaman on March 2, 2022, launched the E-bill Processing system as announced in Union Budget 2022. The Union Minister, while speaking during the inaugural session of the 46th Civil Accounts Day highlighted the efforts of the Central Government to use the technology for facilitating the financial inclusion drive in India.

On the occasion, while talking about the E-bill processing system, the Finance Minister also appreciated the Pradhan Mantri Jan Dhan Yojana and said that Jan Dhan accounts have ended the financial discrimination and have helped the poor in the country to get financial benefits directly into their accounts.

What is E-bill Processing System?

E-Bill Processing System is a major e-governance initiative that has been launched as part of ease of doing business and the Digital India eco-system.

In simple words, e-Bill Processing System is a way of transacting the bills digitally rather than the traditional use of paper. Customers will be able to get their bills online, via e-mail, or in the machine-readable data forms when billed electronically.

According to the Finance Ministry of India, E-Bill Processing System will be implemented across all the Central Ministries and departments.

Why E-bill Processing System is Significant?

The e-Bill Processing system will be a further step to enhance efficiency, transparency, and a faceless-paperless payment system. As per the Finance Ministry, the suppliers and the contractors will not be able to submit their claim online which will be trackable on a real-time basis.

As e-Billing is time-efficient, this will also be a quick and simplified way that will be better fitted to the Government’s call of making India digital. E-bill Processing system will also reduce errors.

E-Bill Processing System as a major e-governance initiative was announced by the Union Finance Minister Nirmala Sitharaman in the Union Budget 2022-23 which was presented in the Parliament of India on February 1, 2022.