Whatever Your Macro Thesis, United Airlines Stock Is The Way To Play It


Over the next 12 months, United Airlines (NASDAQ:) stock is likely to move big. The key question is in which direction will it head? 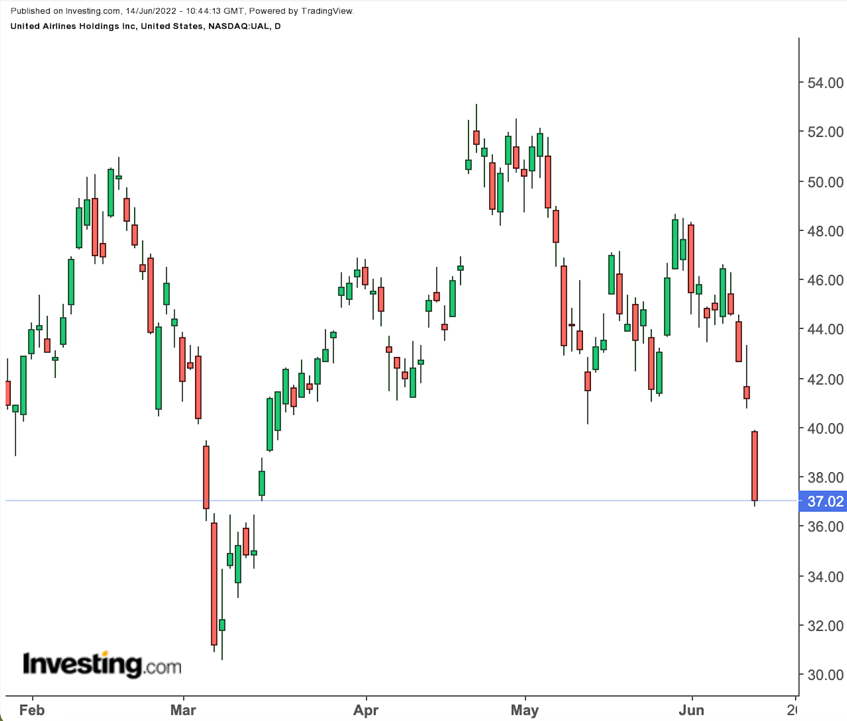 Of course, to answer that question, investors need to answer a more difficult one: in which direction will the market head? UAL almost certainly will move the same way—only faster.

Right now, investors are acting as if 12 months of pain are ahead. If that’s the case, UAL stock, even after a 15% decline so far this year, will keep falling.

But if this sell-off is an overreaction—or if the fact that index officially is now in a bear market means the selling is mostly done—then there’s a strong case for both United stock and the broader market to bounce.

And so, UAL stock provides an efficient vehicle for investors to bet on their own predictions about where the stock market, and the economy, are going.

Volatility Is On The Way

Trading over the last four sessions, in which the S&P 500 has declined 9.9%, shows something close to panic in the market. At the very least, we’re likely to see a good deal of going forward, as investors weigh the probability of a recession, debate the length and persistence of historically high inflation, and await a response from the Federal Reserve.

In that kind of market, an airline stock like UAL is likely to see even greater volatility. The options market certainly is predicting as much. Straddle pricing at the June 2023 expiration suggests UAL stock should move close to 50% over the next 12 months. That’s more than double the expected move in the S&P 500 (about 21%) over the same period.

The pricing in the options market makes some sense. Airlines are notoriously cyclical, so much so that three of the four major airlines have filed for bankruptcy in the past. (United’s predecessor UAL Corp. did so in 2002; Southwest Airlines (NYSE:) is the only major U.S. carrier to have dodged Chapter 11.)

Demand fluctuates with economic sentiment, but costs generally don’t to the same extent. Weaker economic demand usually leads to lower jet fuel prices, which helps somewhat. Still, it’s extraordinarily expensive to fly a jumbo jet anywhere; United needs those planes to be close to full to make a profit. Each incremental ticket, and each incremental dollar of cost for that ticket, adds to earnings. Each lost passenger, and each lost dollar of pricing, moves United further into the red.

Seemingly small moves in demand thus have a huge impact on underlying profits. The consensus earnings estimate for United in 2023 highlights that fact. The average estimate is $7.26, but the range of individual estimates among 19 analysts is staggeringly wide: a low of $1.10, a high of $11.10.

Airline earnings, in short, are volatile, and that’s why the same is true for airline stocks.

The 2023 estimate does highlight a potential argument for UAL stock at a three-month low. The forward price-to-earnings multiple sits at barely over 5x. Airline stocks generally receive multiples below the market; but before the pandemic, UAL often saw a P/E multiple in the low double-digits.

For an investor who believes this market sell-off is an overreaction, there aren’t a lot of better bets to take than UAL. The stock is cheap relative to earnings expectations. And business actually appears to be strong at the moment.

It was less than a month ago that United raised its guidance for the second quarter. The company expects revenue per available seat mile (a measure of pricing) to be up a stunning 23-25% from where it was in 2019. As a result, United forecasts its highest-revenue quarter ever.

And if the economy cooperates, there’s plenty of room for revenue and profits to grow. Demand for air travel still hasn’t returned to pre-pandemic levels, and one industry consultant expects it won’t do so until 2025.

If United can drive profits in 2022, and $7-plus per share in 2023, at a time when the external environment still is somewhat mixed, it should have a glide path toward double-digit EPS over the next few years. That in turn would make the current price of $37 an absolute steal: in that scenario, there’s a reasonable case for UAL stock to triple in three years. 10-11 X $10-$11 in 2025 EPS would do the trick; bear in mind that in 2019, on an adjusted basis (and using the current share count), United’s EPS was over $9.

Obviously, the economy needs to cooperate for earnings to keep growing. But for an investor who believes the economy indeed will cooperate, there aren’t a lot of better trades out there.

The problem is that if the economy doesn’t cooperate, United potentially is in trouble. The absolute nightmare scenario remains in play: the combination of a weak economy and high fuel prices. Add in secular weakness in business travel, owing to the rise of remote work, and there’s a world in which demand plummets and United runs up years of losses.

Indeed, United’s predecessor company, UAL Corp., saw a similar story play out. In 1999, amid a roaring stock market and a strong economy, UAL generated nearly $10 per share in net profit. In 2000, the company barely eked out any profit (just four cents per share). The Sept. 11 attacks the following year shut the industry down; by 2002, UAL was bankrupt.

To be sure, United’s current financial position is far stronger. The company has over $18 billion in cash; UAL at the end of 1999 had less than $1 billion. Bankruptcy risk here is far lower than it would have been a decade or two ago.

But at $37 United still has a market cap over $12 billion. If the market starts forecasting years of losses—or even years of thin profit—a $37 share price is not going to hold. If a recession arrives—or even a softer landing, combined with still-high jet fuel prices—there’s essentially nothing United can do. Earnings are going to go down and the stock almost certainly will follow.

From here, the more negative scenario appears more likely. This market sell-off seems like a reaction to looming and very real economic risk than an overreaction to inflation, the Fed, or whatever else.

And for investors betting that there’s more downside ahead in the market, United stock is a tempting target. However far this market falls, UAL is likely to fall twice as much—at least.

Disclaimer: As of this writing, Vince Martin has no positions in any securities mentioned.

Looking to get up to speed on your next idea? With InvestingPro+, you can find:

And a lot more. Get all the key data fast so you can make an informed decision, with InvestingPro+. Learn More »