Home - News - Android tablet, Q2 slowly: but that of Chromebooks to forget
NewsTechnology

Android tablet, Q2 slowly: but that of Chromebooks to forget

The trend recorded in the first quarter of 2022 is also confirmed in the second quarter of the year. According to the data just released by IDC and Strategy Analytics, in fact, after the pandemic push, the Android tablet market is experiencing an important contraction again, and that of Chromebooks – again to stay at Google – is faring even worse, with a collapse. really substantial in the past three months.

TABLET, FOR THE FIRST TIME ANDROID THOSE UNDER 50%

More specifically, as noted by Strategy Analytics for the first time in 10 years, the market share of Android tablets has fallen below the symbolic threshold of 50%. Even if the percentage has stopped just below, at 49%, it remains a strong sign of how the entire landscape linked to the green robot is in remission. Applewhile seeing a reduction in overall iPad shipments, it has however snatched an increasing market share compared to the previous quarter, with a 3.3% growth which allowed her to reach the 38%.

As anticipated at the beginning if tablets cry, Chromebooks don’t laugh. On the contrary, they are even worse off: for example, the fact marked by is indicative HPwho saw a drop in shipments on an annual basis of as much as 78.6%. In general, the Chromebook shipments compared to the second quarter of 2021 in this Q2 2022 they suffered one significant reduction of 51.4%. To put the numbers into perspective in a more concrete way, if 12.3 million Chromebooks were shipped in the same time window last year, this year the figure has plummeted to just 6 million. 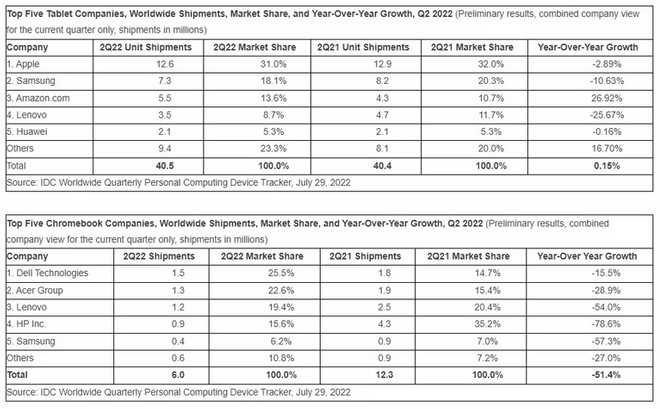 To influence these data, both on the tablet and on the Chromebook front, there is a certain saturation of the market to be added to the chip crisis and a geopolitical situation that with the conflict unleashed by Russia in Ukraine has become further complicated in recent months. .

If recession hits the UK, a base rate rise is the last thing we need | Interest rates

Listen: How treasurers, CFOs can de-risk idle cash through automation