Asus Zenbook 17 Fold OLED, behind the scenes of a folding notebook

Until not long ago, if I had been told that in 2022 I would be holding a foldable notebook in my hands done and done i guess I would not have believed it. I started working in this sector almost twelve years ago, which, considering the technology market and its evolution, are quite a few. I have seen many preview products up close, sometimes even concepts that have never arrived on the market or perhaps not in the form that had been shown to me and other times I have been able to talk to engineers who have told me their vision of a future, often apparently very remote.

Here, in 2018, on the occasion of Computex in Taipei, Asus locked us in a small room with a couple of these engineers and a sample of Project Precog, a notebook equipped with two displays with a hinge in the middle to join them; a product that 5 years ago seemed revolutionary even in this form alone. Well, imagine what he might have thought when one of these two engineers told me that we would never have seen such a solution on the market because products with foldable displays would probably have come sooner. 2018, 5 years have passed but apparently in the company’s secret rooms the Zenbook 17 Fold OLEDwith who knows what code name, it was somehow already planned.

Also for this reason, when I was given the opportunity to delve a little deeper into the genesis of this notebook, I couldn’t say no, and so now I’ll tell you what Asus told me about it.

A PROJECT THAT COMES FROM FAR AWAY 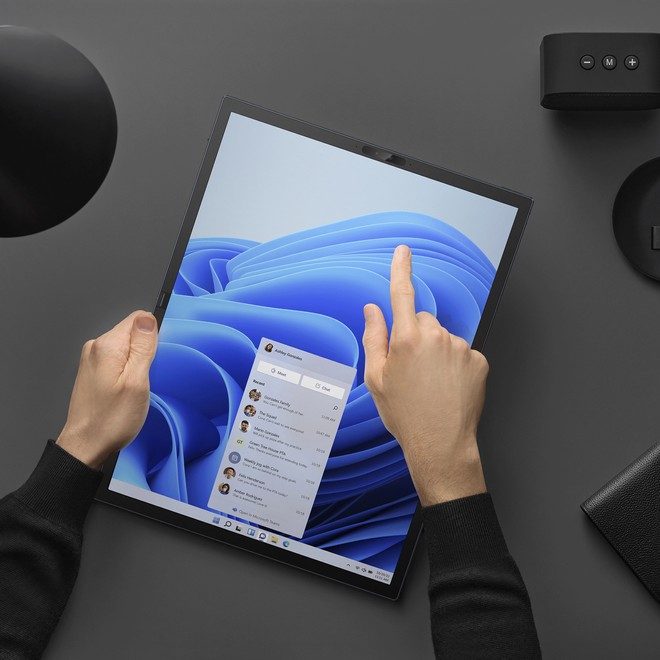 First of all, let’s start from the idea of ​​creating a folding notebook which, as mentioned earlier, had been one of Asus’ projects for some time now. But so why only now could it be done? The reasons are essentially two: the first is related to maturity of the necessary technologies to carry out this project, the second alle user habits. Only now has the reliability and technological maturity necessary to be able to guarantee that solutions such as the Zenbook 17 Fold OLED can actually be used every day without problems and in a form that does not force us to pay too much attention. This must be combined with the fact that, after several generations of foldable smartphones and with a growing need to better adapt to agile working, users are now more open and ready to welcome this type of device.

It’s no mystery that recent global vicissitudes have significantly changed the way people work and interacts with its own technological products, primarily smartphones and notebooks. The line between work and leisure is increasingly blurred and a new model of work has inevitably emerged which has quickly become the most common one.

Zenbook 17 Fold OLED arises from this need to meet the needs of users, making sure that the notebook can adapt in the best way to any type of situation, more than a traditional notebook could do. For this reason, a product was studied that could be used in as many as 6 different ways.

The 17-inch OLED display of the Zenbook can then be folded into itself turning it into a notebook with a 12.5-inch display, this can then be used exactly as such using the bluetooth keyboard supplied or with the touchscreen keyboard that appears on the lower half of the display. Similarly the screen can be used spread out like a large tablet, or placed horizontally on the desk thanks to the integrated stand as if it were a desktop monitor. But not only that, in moments of relaxation we can also fold it like a book and use it as a e-book reader. 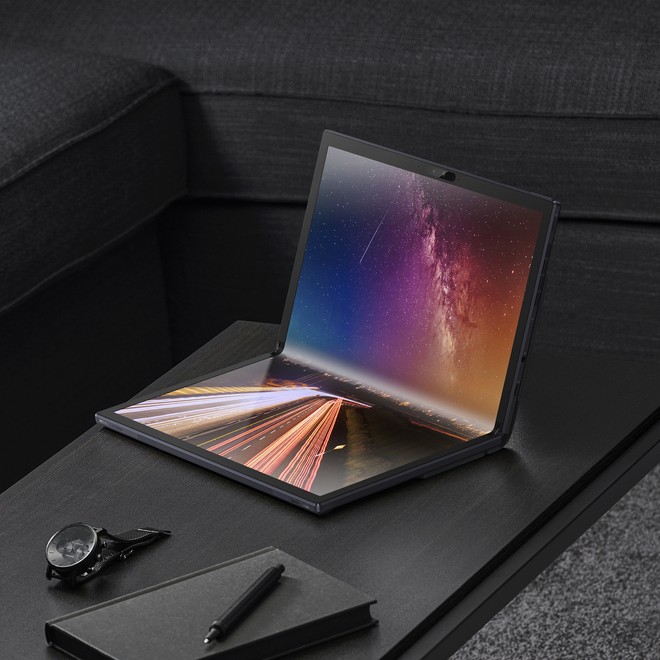 Going into more detail notebook mode is the one that will surely be used more by ordinary users and so the goal was not to overly sacrifice size. The result is an experience very similar to that of a 13-inch notebook, which is also a size that allows you to create a physical keyboard that fits in the footprint of the device while maintaining standard dimensions as regards the individual keys. In short, all designed to offer an experience without compromise despite the form factor of the product.

When then the screen opens completely and you place it on the desk using the stand on the back, we have available much more space than what a classic 13 or 15 inch notebook can offer. This is the most suitable mode for multitasking, for keeping several windows open at the same time, but also for processing multimedia files.

Those just described are certainly the most common scenarios but, if desired, users can put the Bluetooth keyboard aside use the product in extended mode, i.e. in “portrait” orientation. The vertical extension of the screen offers more flexibility in some situations, such as web browsing or consulting documents, and therefore can be useful in certain situations. The laptop mode with virtual keyboard is instead designed for those who do not want to carry around the physical keyboard or even just for the forgetful who forget it. While the tablet mode offers the user experience of a normal tablet but with the power of a notebook and a much larger surface on which to view the elements. 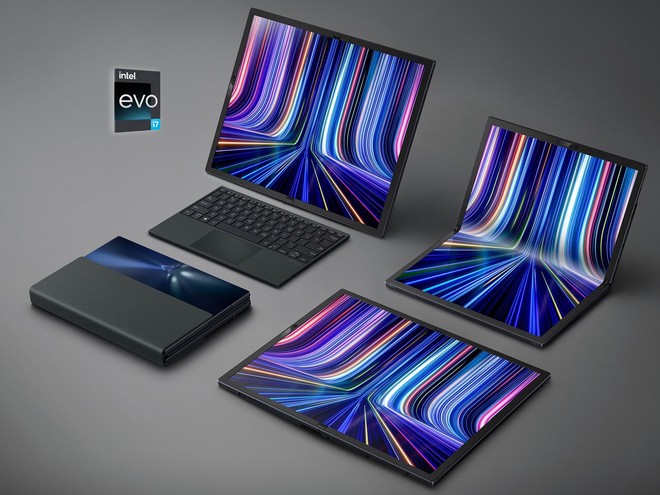 Ok, therefore, a lot of flexibility and versatility which must however be supported by a mechanics up to par, because all these methods of use still require that the notebook is continuously opened and closed. One of the key elements for the construction and design of this Zenbook 17 Fold OLED it was undoubtedly the locking mechanism of the screen.

The challenge was to be able to create a hinge system that would allow, in addition to the opening and closing at 180 degrees, also the maintenance of the opening at lower angles, exactly like a notebook, with the difference that here we have a foldable display and a weight equally distributed between the two halves of the laptop.

To succeed in the enterprise of creating a solid and at the same time stable hinge it took months of work and close collaboration with all the partners who supply Asus with the various hardware components: from the elements of the hinges to the plastics of the body up to the OLED display itself flexible (ed. produced by BOE).

At the end of the games we therefore opted for a design in which the hinges overlap the display on the inside. When the display is fully extended, the hinges are substantially level with the surface of the screen, while by bending it a part of them rises slightly, increasing the resistance and tightness of the mechanism.

Compared to the solutions adopted by the most common folding smartphones, the one designed by Asus is decidedly more complex because it must be tested to support a much higher weight as well as a much larger panel. The same goes for the stand in the back of the laptop, designed to support the weight of the solution and make it stable when used in desktop mode; all this while still trying to keep the smallest footprint possible. It was therefore necessary to find the best compromise between the thickness of the stand, the strength of the hinge and the length of the tiltable portion.

All characteristics that required a very in-depth study of the materials to be used to make the notebook. The structure must obviously be rigid but the part that surmounts the hinge must flex and therefore a malleable material is needed in that portion. After several attempts and countless studies on the chemical composition of the most suitable materials, Asus therefore settled on frame and structure in metal and magnesium alloy, in order to combine resistance and lightness. The back panel is instead made of glass and a special scratch-resistant protective film has been applied over it. The lining of the central part that slides when opening and closing the panel and instead of synthetic leather applied on a high resistance plastic material.

There film to protect the glass parts of the rear panel was then worked with a very particular technology and innovative that allows to obtain an almost metallic texture capable of reflecting light, creating a satin effect with concentric rays that recalls the typical finish of Zenbook solutions. At the center of this radius is the A-shaped monogram which for some time has been reminiscent of the Asus logo. In short, nothing has been left to chance. 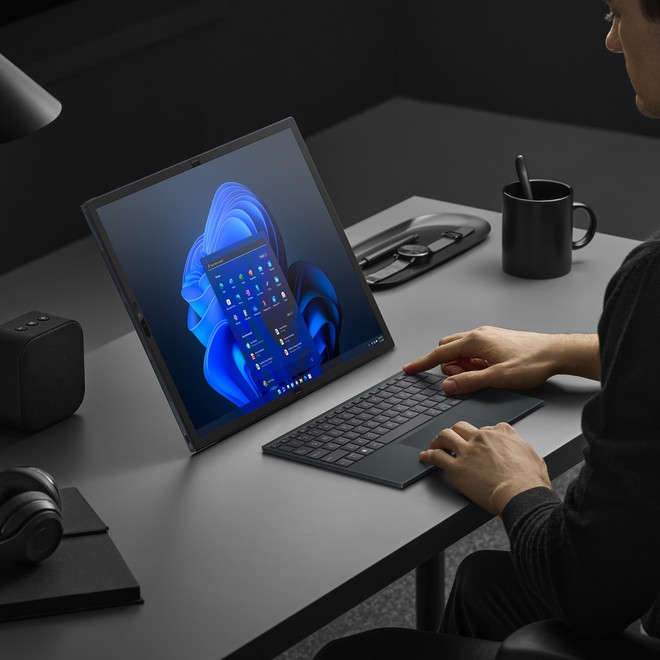 We have therefore understood that creating a solution of this type is absolutely not child’s play and, contrary to what one might think, the biggest challenge does not concern the technical part of the design, the more the dialogue with all partners and suppliers. The integration of the different elements of the body, together with the creation of the components of the internal architecture, are all phases that required a great deal of effort and a lot of time for optimization and testing.

This Zenbook 17 Fold OLED is profoundly different from any other standard notebook and, for this reason, even more attention to detail is needed. Commissioning the various components to partners required a much longer and more meticulous pre- and post-procurement verification process. And this has meant that this phase of communication between the various links in the chain has proved to be the most complex of the whole process.

Military drones, and forbidden US chips