Back bailout or risk losing it all, Uniper boss tells shareholders By Reuters 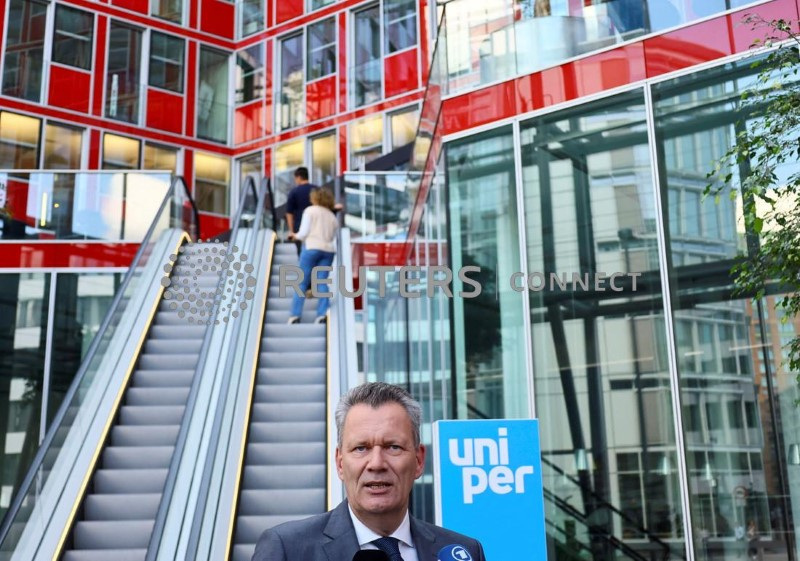 © Reuters. FILE PHOTO: Klaus-Dieter Maubach, CEO of German utility Uniper, addresses the media after Germany has agreed to nationalize Uniper by buying Fortum’s stake in the gas importer to secure operations and keep its business going, in Duesseldorf, Germany, Sept

BERLIN (Reuters) – The CEO of Uniper has asked shareholders to approve a planned bailout by Berlin that will cost more than 50 billion euros ($52.91 billion), warning that the stricken German gas trader will otherwise have to consider filing for insolvency.

Ahead of Monday’s extraordinary shareholder meeting in Duesseldorf, Chief Executive Klaus-Dieter Maubach said the disarray caused by the loss of supplies from Russia could lead to shareholders walking away with nothing if they did not accept the proposal to take Uniper into German public ownership.

Gazprom (MCX:) was once its biggest supplier, but a big drop in deliveries after the Russia’s invasion of Ukraine forced Uniper to buy gas elsewhere at much higher prices to meet existing contracts.

“(The measures) are indispensable for this company’s future,” Maubach is expected to say in a speech at Monday’s shareholder meeting, the text of which was published on Uniper’s website on Sunday.

See also  Ethereum Could Resume Decline Below $1,100, Bears In Control

“If approval is not granted, we would have to review very critically the so-called going concern forecast for our company,” he added. “In the Management Board’s view, a possible insolvency could lead to a complete loss for shareholders.”

The loss of Russian gas, Moscow’s retaliation for Western sanctions over its invasion of Ukraine, triggered a 40 billion euro net loss for the importer, which provides around a third of Germany’s gas, the largest loss in German corporate history.