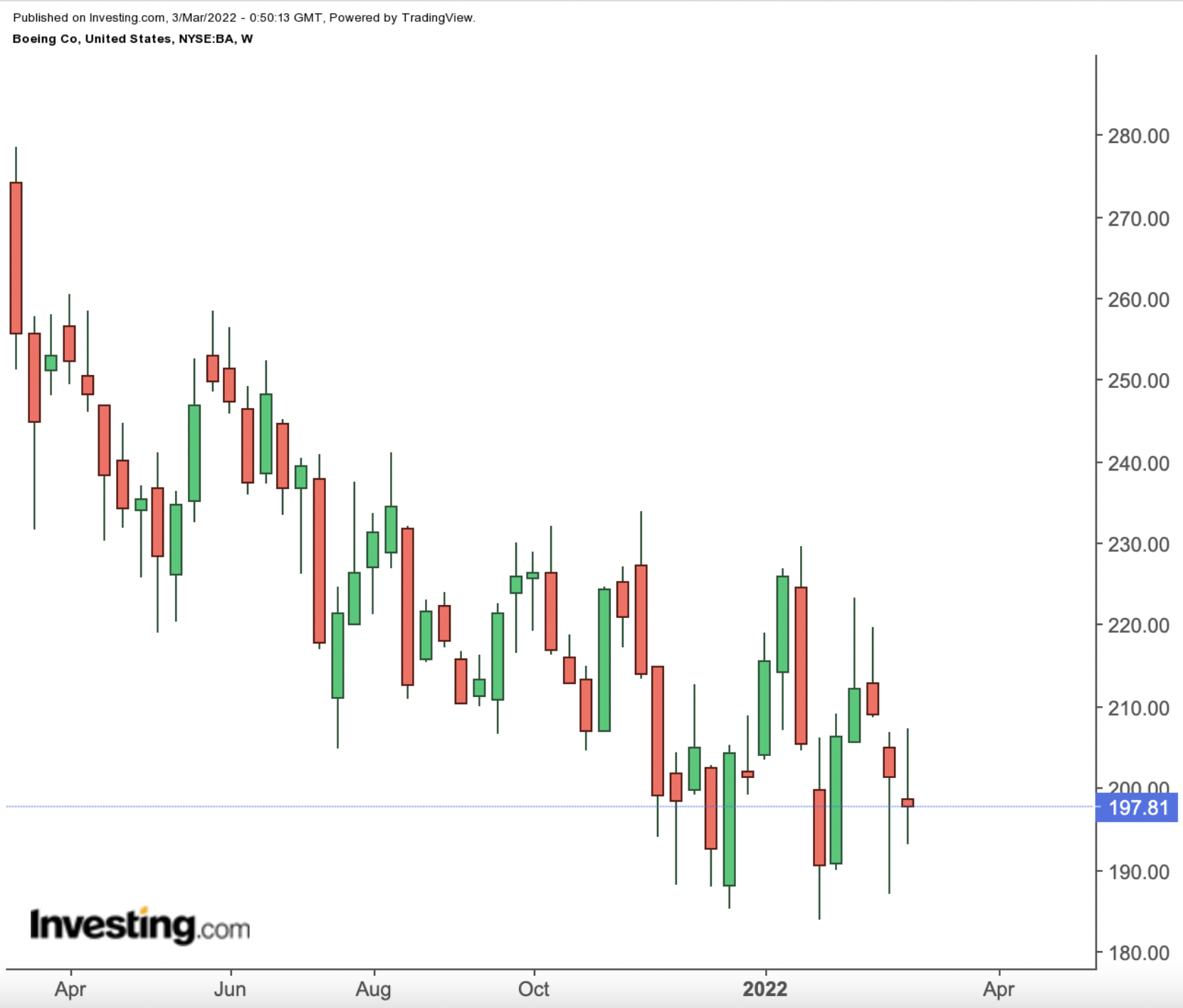 Boeing released Q4 financials Jan. 26. Overall, the were a big miss. However, the positive cash flow figure of $494 million was also a surprise for analysts.

Total revenue came in at $14.79 billion, down 3% year-over-year. In the commercial airplane division, revenues remained flat at $4.75 billion. But the defense, space and security division suffered a 14% decline. Meanwhile, revenues in the global services division enjoyed a 15% increase.

“2021 was a rebuilding year for us… As the commercial market recovery gained traction, we also generated robust commercial orders, including record freighter sales. Demonstrating progress in our overall recovery, we also returned to generating positive cash flow in the fourth quarter.”

In 2022, management expects to see higher 787 and 737 deliveries in the commercial division, and has solid growth expectations for the global services division. However, revenues for the defense, space and security should remain flat.

Investors were not pleased with the results. Prior to the release of the fourth quarter results, BA stock was at $206. Now, it is shy of $198. Meanwhile, Russia’s invasion of Ukraine has also added to their volatility.

What To Expect From Boeing Stock

Among 25 analysts polled via Investing.com, BA stock has an “outperform” rating. Wall Street also has a 12-month median price target of $258.45 for the stock, implying an increase of more than 30% from current levels. The 12-month price range currently stands between $180 and $307. 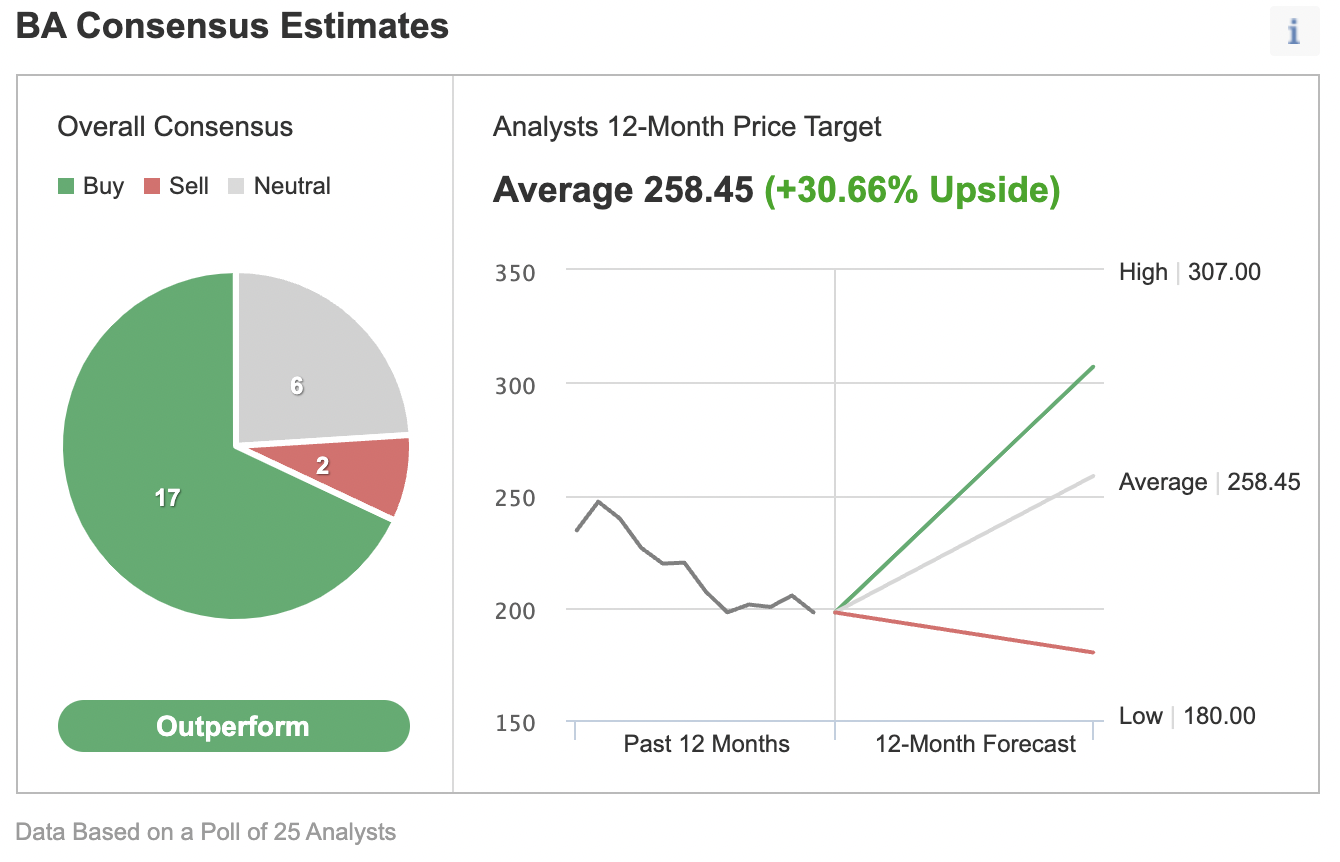 However, according to a number of valuation models presented on InvestingPro, like those that might consider P/E or P/S multiples or terminal values, the average fair value for Boeing stock stands at $191.82. 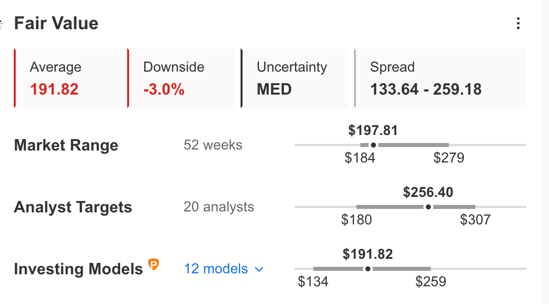 Put another way, fundamental valuations suggest shares should fall by 2.8%.

In comparison, LMT stock’s fair value stands at almost $550, implying a return of more than 22%.

Our expectation is for Boeing stock to trade in a wide range and build a base between $185 and $205 in the coming weeks. Afterwards, a new up leg in BA shares could possibly begin.

Boeing bulls who believe the decline in the stock is likely to come to an end could consider investing now. Their target price would be analyst forecasted price of $258.45.

Alternatively, investors could consider buying an exchange-traded fund (ETF) that has BA stock as a holding. Examples include:

Although investors might want to buy BA stock for their long-term portfolios, they could also be nervous about further declines in the coming weeks. Therefore, some might prefer to put together a “poor man’s covered call” on the stock instead.

So, today, we introduce a diagonal debit spread on Boeing by using LEAPS options, where both the profit potential and the risk are limited. Investors who are new to the strategy might want to revisit our previous articles on LEAPS options first before reading further.

Most option strategies are not suitable for all retail investors. Therefore, the following discussion on BA stock is offered for educational purposes and not as an actual strategy to be followed by the average retail investor.

Thus, the call options for the underlying stock have different strikes and different expiration dates. The trader goes long one option and shorts the other to make a diagonal spread.

Most traders entering such a strategy would be mildly bullish on the underlying security. Instead of buying 100 shares of BA, the trader would purchase a deep in the money LEAPS call option, where that LEAPS call acts as a “surrogate” for owning the stock.

The delta of this option is close to 80. Delta shows the amount an option’s price is expected to move based on a $1 change in the underlying security.

However, the actual change might be slightly more or less depending on several other factors that are beyond the scope of this article.

For the second leg of this strategy, the trader sells a slightly out of the money (OTM) short-term call, like the BA April 14 200-strike call option. This option’s current premium is $10.65. The option seller would receive $1,065, excluding trading commissions.

There are two expiration dates in the strategy, making it quite difficult to give an exact formula for a break-even point. Different brokers might offer “profit-and-loss calculators” for such a trade setup.

Here, the maximum return, in theory, would be about $1,188 at a price of $200 at expiry, excluding trading commissions and costs. (We arrived at this value using an options profit-and-loss calculator). Without the use of such a calculator, we could also find an approximate dollar value. Let’s take a look:

However, in practice, it might be more or less than this value. There is, for example, the element of time decay that would decrease the price of the long option. Meanwhile, changes in volatility could increase or decrease the option price as well.

Understandably, if the strike price of our long option had been different (i.e., not $150), its delta would have been different, too. Then, we would need to use that delta value to arrive at the approximate final profit or loss value.

Here, by not investing $19,740 initially in 100 shares of Boeing, the trader’s potential return is leveraged.

Ideally, the trader hopes the short BA call will expire out of the money, or worthless. Then, the trader can sell one call after the other, until the long Boeing LEAPS call expires in close to two years.