Since late December 2021, prices have been climbing. And since the start of the Russia-Ukraine conflict, it’s gained momentum. Indeed yesterday, both WTI and vaulted past the $100 a barrel level.

This spike in the commodity augers poorly for energy consumers, but could bode well for producers. Based on the current macro outlook, investors wanting to profit from higher oil prices and consistent demand might consider taking a position in a US oil major rather than in the commodity itself. Among its peers, right now both the fundamentals and technicals for Houston, Texas-based ConocoPhillips (NYSE:) are lining up nicely.

COP specializes in finding and producing oil and worldwide. It has operations in more than a dozen countries, making it one of the world’s largest E&P businesses. Given its size and reach, ConocoPhillips has access to some of the world’s cheapest oil.

The technical chart is equally dynamic. 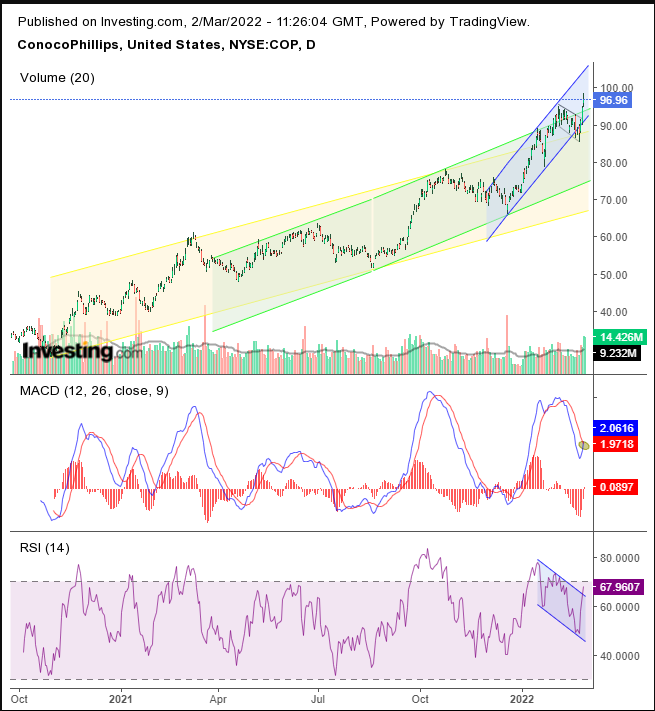 The stock has been rising at an ever-increasing rate with escalating rising channels. The price completed a falling flag yesterday, considered bullish after the 20% jump in five weeks, between the Jan. 24 low and the high of Feb. 4, and the 43.7% surge since the Dec. 20 bottom, a period of just six and a half weeks.

The psychology of a falling flag is that it forms when bulls take profit, thereby allowing newer bulls who missed the preceding rally to participate. After the newcomers absorb all available supplies, buyers must raise bids to find new sellers at higher prices.

That motivation pushed prices above the flag, signaling a resumption of the underlying uptrend, demarcated by the fastest rising channel (blue). The original rising channel (yellow) provided support for the flag. The upside breakout was accompanied by volume rebounding from the lows shown during the flag formation, supporting the view that the wavering price was due to profit-taking, not a bearish presence.

The momentum-based RSI broke free of its falling channel, and the MACD’s short MA crossed above its long MA as receiving pricing improved.

To appreciate the significance of the recent rise, take a look at the long-term chart: 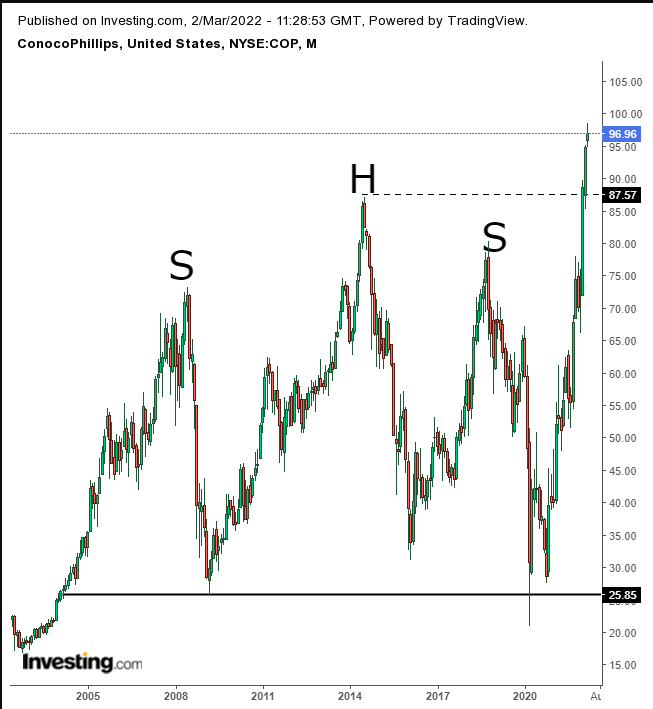 The price blew out in February after an H&S top in play since 2004.

Conservative traders should wait for the price to revisit the flag’s top and demonstrate accumulation before risking a long position.

Moderate traders would wait for a pullback to reduce exposure.

Aggressive traders could enter a contrarian short position now, as the price reaches the psychological $100 level, provided they have a trading plan that justifies the risk. Here is an example: