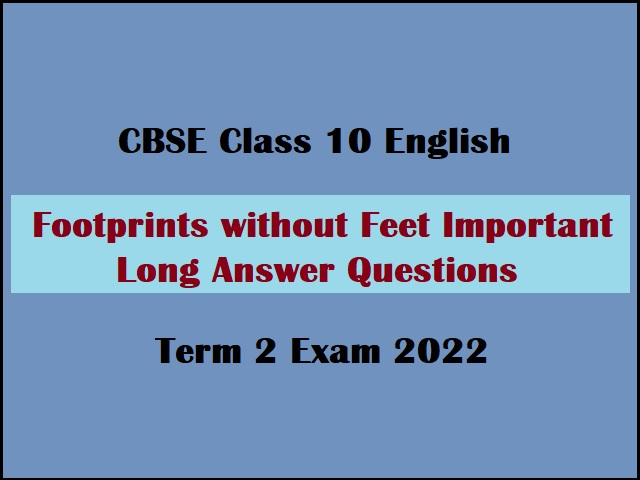 Get important 4 marks questions for CBSE Class 10 English Footprints without Feet to prepare for the upcoming exam 2022. Practice questions prepared by exam experts to score full marks in paper.

Chapter – The Making of a Scientist

1. “Every adversity, every failure, every heartache carries with it the seed of an equal or greaterbenefit.”- Elucidate with reference to Richard Ebright’s experience of being motivated to become a real scientist on not winning anything at the Science Fair.

Failure is something which is dreaded by every one of us. We try to avoid it with all our might. But the simple truth is, no great success was ever achieved without failure. It may be one epic failure or a series of failures. But, whether we like it or not, failure is a necessary stepping stone to achieving our dreams. This can be well elucidated with the example of Richard Ebright- the scientist in the lesson” The Making of a Scientist”. When Ebright was in the seventh grade, he participated in a county science fair. His entry was slides of frog tissues, shown under a microscope. He lost the competition. He felt really sad when he just sat there and others won many prizes. That was the time of motivation. A sense of real Science entered him and he realised that winners had to try to do real experiments and not just a simple neat display. The competitive spirit started entering him and he thought of conducting experiments. Next year his experiment on Viceroy’s copying Monarchs came first in the zoology division and overall third. The year after that he found out an unknown insect hormone which led him to his new theory on the life of cells. Ebright’s story, demonstrates that defeat is the stepping stone of success. Not winning anything at the science fair encouraged him greatly to conduct real experiments which molded him into a full blown scientist.

2. ‘The development of a child is guaranteed in his curiosity to discover the cause behind each and every incident. “How do you think this quality helped Richard Ebright to become a great scientist?

Richard had a driving curiosity and bright mind right from his childhood. He used to observe and collect butterflies of every species. He once displayed a slide of frog tissues under a microscope as his experiment in a Science County Fair. . He lost in that competition. After that he realised that only true experiments help one in succeeding. He was an exceptional child with rare qualities of intelligent observation and keen interest in the nature of things. The traits of his successful career were nurtured and honed during his childhood itself. These qualities are definitely desirable in every child and curiosity should never be curbed or discouraged. Curiosity in children is an appetite for knowledge. One reason why children abandon themselves to silly things and trifle away their life insipidly is because they find their curiosity balked and their inquiries neglected. Providing logical answers to the queries goes a long way to develop a scientific way of thinking and problem solving. Children learn to analyse the things and come to logical conclusions and this is indeed the correct learning procedure. The learning environment must reflect a classroom and outer space that inspire a sense of wanting to investigate, to find out and to explore.

3. Richard’s mother had a great influence on him. Discuss.

Mother’s love is the fuel that enables the normal man to do the impossible. The role of Richard’s mother in molding him into a great scientist is immense. She was a single parent and had her entire focus upon Richard. She was his only friend until he started school. At night they just did things together. She and her son spent almost every evening at the dining room table. If he didn’t have things to do, she found work for him — not physical work, but learning things. He enjoyed doing them. She took him on trips, bought him telescopes, microscopes, cameras, mounting materials, and other equipment and helped him in many other ways. She was his only companion for a long time. It was his mother who got him the book The Travels of Monarch X. This book opened the world of science for Richard. She also wrote to Dr. Urquhart to guide her son. The scientist helped Richard and guided him. Thus, his mother actually shaped him into an extraordinary scientist.

4. Richard Ebright displayed a well-rounded personality. Do you agree? Elucidate in the context of the given text.

Richard’s genius was obvious by the time he was in his second grade. He managed to collect all twenty-five species of butterflies around his hometown and classify them. He also loved to collect coins, fossils and rocks. Science was not his only passion. He was an active member of his schools oratory club and model United Nations club and was an effective debater and a public speaker. He loved photography as well. He was an enthusiastic canoeist and an all-around outdoors person. Learning was easy for him. So he found it simple to devote time and energy to many other interests. He became a champion in whatever he did. He believed in the spirit of competition to win. But, he did not wish to defeat others just to win. He wanted to win to do his best. Thus, he displayed a well-founded personality.

For a long time the scientific community had regarded the bright spots on a monarch pupa as purely ornamental. But Dr. Urquhart did not believe it. Nor did Richard. He started his experiments on the monarch pupa. He built a device with the help of a friend. This led to the discovery of a hormone. Richard proved that the hormone was necessary for the growth of the butterfly. This discovery got him many honors. Also, it led to another important study. He began working on how cells read their DNA. DNA is the carrier of heredity and is called the blueprint of life. His theory could find answers to the cure of many types of cancers and diseases.

Download all the chapter-wise question from the following link: