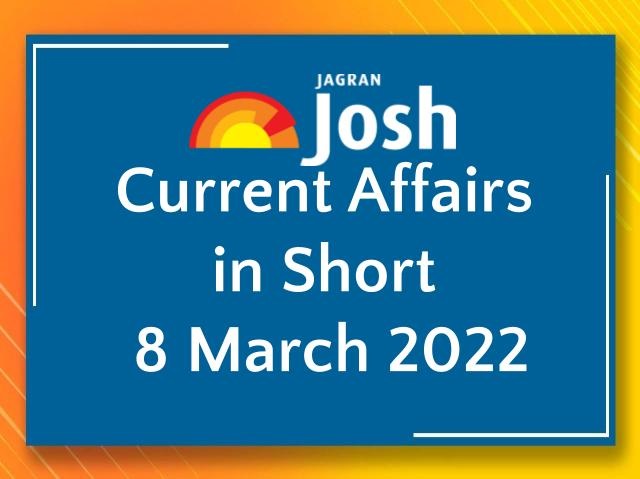 • As per the Ministry, under the SAMARTH initiative, 20% of seats in free Skill Development Programs will be allocated for women and more than 7 thousand 500 women will be benefitted from it.

• Twenty percent of MSME Business Delegations sent to the Domestic and International exhibitions under the schemes for Marketing Assistance will be dedicated to women-owned MSMEs.

• Through the initiative, the MSME ministry is focusing on providing Skill Development and Market Development Assistance to women.

• Prime Minister Modi spoke to the President of Ukraine Volodymyr Zelenskyy on a phone call that lasted for about 35 minutes.

• The two leaders during the call discussed the evolving situation in Ukraine amid Russia’s invasion. Prime Minister also appreciated the continued direct dialogue between Russia and Ukraine

• Prime Minister Modi thanked the Ukrainian President for the help extended by the Government of Ukraine in the evacuation of Indian Nationals.

• PM Modi also sought continued support from Ukraine in an ongoing effort for the evacuation of Indian Nationals from Sumy.

European Union agrees to examine bids from Ukraine, Georgia and Moldova to join the bloc

• The ambassadors of the European Union have agreed to examine the bids by Georgia, Ukraine, and Moldova to join the bloc, starting the lengthy process towards accession.

• The French Presidency of the European Union stated that 27 Permanent Representatives of European Countries had agreed to invite the European Commission to present an opinion on each application.

• Two former Soviet Republics- Moldova and Georgia- applied for the European Union Republic last week in the wake of the Russia-Ukraine Military Conflict.

All Indian Students moved out from Ukraine’s Sumy: MEA

• The Ministry of External Affairs announced on March 8, 2022, that it has evacuated all the Indian students from Ukraine’s Sumy.

• The news was tweeted by MEA Spokesperson Arindam Bagchi. He tweeted, “Happy to inform that we have been able to move out all Indian Students from Sumy.”

• Under India’s ‘Operation Ganga’, a rescue operation to evacuate Indian nationals from Ukraine’s neighboring countries, about 18,000 Indians have been brought back by special flights so far.

• Indian Ari Force had flown 12 missions to bring back 2467 passengers, as part of Operation Ganga, and carried over 32-tonne relief material.

In Nod to Russia, Ukraine Says No Longer Insisting on NATO Membership