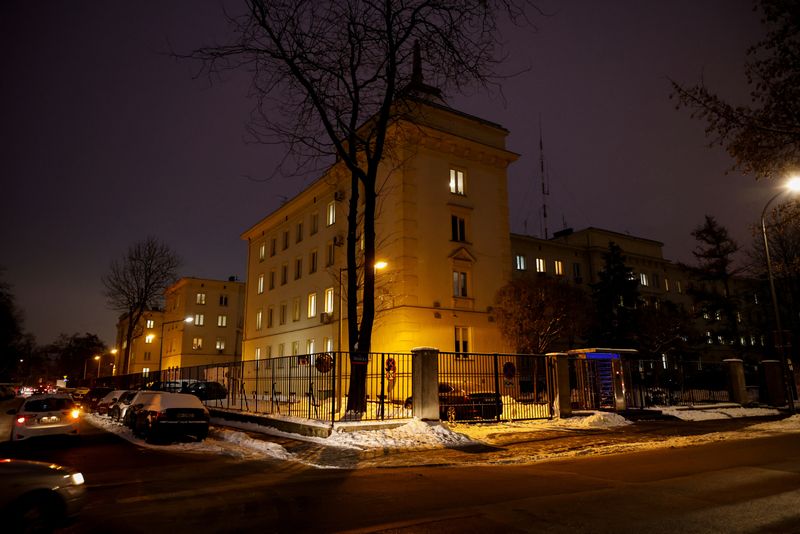 © Reuters. FILE PHOTO: A general view of a building of the Polish Police Headquarters, where, according to Poland’s interior ministry, top cop was injured by an exploding official gift, in Warsaw, Poland December 15, 2022. REUTERS/Kuba Stezycki

WARSAW (Reuters) – Poland’s top policeman said that an explosion in his office was caused by a grenade launcher, telling private broadcaster RMF FM that he had received two of the weapons as a gift from Ukraine.

Poland’s interior ministry and prosecutor’s office had not previously confirmed media reports that the explosion on Wednesday, at police headquarters in Warsaw, was caused by a grenade launcher.

Prosecutors said they were investigating the blast, which resulted in Police Commander in Chief Jaroslaw Szymczyk being taken to hospital.

“When I was moving the used grenade launchers, which were gifts from the Ukrainians, there was an explosion,” Szymczyk told RMF FM.

He said he was moving the launchers into an upright position at the time.

RMF cited a source from a Polish delegation that visited Ukraine as saying Szymczyk had received two launchers from officials as presents during visits to the police and the State Emergency Service of Ukraine.

The officials had assured the Polish delegation that the launchers were not loaded, and the delegation took them back to Warsaw by car before leaving them in the back room of Szymczyk’s office, the source told RMF.

Szymczyk has been criticised over the incident, with commentators with backgrounds in the security services cited by Polish media as saying that military equipment should not have been taken into Poland from outside the European Union or taken into an office.