EY has told staff it expects to report record global revenues of $45.4bn for its most recent financial year as attempts to win senior leaders’ backing for a break-up of its audit and advisory businesses drag on.

The Big Four accounting firm disclosed the figure on a call for its 312,000 staff globally, hosted by chair and chief executive Carmine Di Sibio.

The sales number is a 13.5 per cent increase on the $40bn reported by EY for its previous financial year, which ended in June 2021. Revenues increased 16.4 per cent in local currency terms, said people at the firm. EY usually reports its global revenues in September.

The jump follows booming demand for professional services. All of the Big Four firms — which also include Deloitte, KPMG and PwC — reported increased sales last year.

PwC boss Bob Moritz told the Financial Times this month that he expected his firm to report record revenues of about $50bn for the 12 months to June 2022. The firms do not disclose their global profits.

Staff were given little new information about the proposed break-up of EY on Thursday’s call, according to people at the firm. The separation would be the biggest shake-up of a Big Four group in two decades.

EY is considering spinning off and publicly listing its advisory business, which offers companies consultancy, deals advice and managed services, to free it from conflicts of interest that restrict it from winning work with its audit clients.

A split would deliver multimillion-dollar windfalls for thousands of partners if it goes ahead but must first win the backing of the firm’s global leadership before being put to a vote in each of the national member firms that make up the EY network.

Di Sibio told the FT this month that he hoped to have a decision “in the next couple of weeks or so” on whether EY’s global leadership intended to proceed to country-by-country votes. But others at the firm said that the timeline for a decision on whether to proceed appeared to be slipping.

Some EY partners are “convinced the . . . timelines [to agree the split] are all slipping”, said an EY partner not involved in the break-up planning.

Some jurisdictions had been told to expect an update in July but, after the all-staff call on Thursday, that person said it seemed EY Global had “underestimated the amount of work required”. 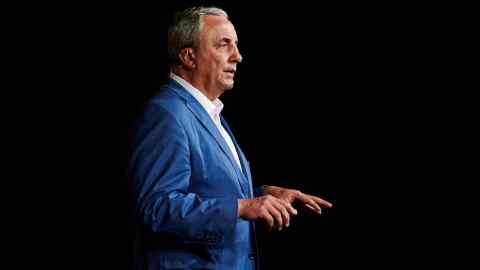 Planning for the potential split has been held up by several issues relating to the structure of the deal, which has to meet regulatory requirements in about 150 countries where EY operates.

These include rules in individual countries such as China, where the audit business may end up retaining more advisory divisions than in other jurisdictions in order to win the approval of regulators, said a person with direct knowledge of the planning.

Among other issues, according to people at the firm, is how to deal with regulated businesses such as EY Law, which has about 3,400 legal professionals around the world. Many countries have rules restricting legal advisory businesses being owned by a company, for example.

EY had previously assumed that legal and regulated tax-advisory businesses generating annual revenue of up to $1.8bn would have to be excluded from the deal and sold back to the partners running those divisions, according to people at the firm and documents seen by the Financial Times.

However, the firm now expects that about 80 per cent of those revenues could be retained within the advisory business after any split, said the person with knowledge of the talks.

UPSC 2022: UPSC launched OTR platform for the submission of applications

Encouraging fatherhood in a post-Dobbs America