Festivity on hold for stocks as rate hikes beckon By Reuters 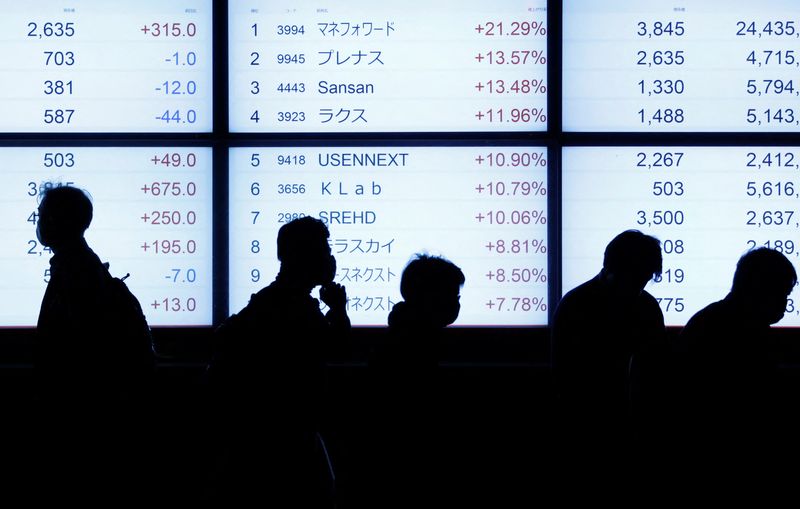 © Reuters. FILE PHOTO: Passersby are silhouetted as they walk past in front of an electric stock quotation board outside a brokerage in Tokyo, Japan October 18, 2022 REUTERS/Issei Kato

SINGAPORE (Reuters) – Asia’s stockmarkets made a wobbly start to the final full trading week of 2022, with the prospect of interest rates rising further next year taking the edge off festive cheer.

The Federal Reserve and European Central Bank hiked rates and promised more last week, and speculation is even building that the Bank of Japan, which meets on Monday and Tuesday, is eying a shift in its ultra-dovish stance in future.

fell 1% in early trade and the yen, which rose about 0.5% to 136.00 per dollar, was the biggest mover in quiet currency trade. MSCI’s broadest index of Asia-Pacific shares outside Japan rose 0.4%.

“This sort of news we’re getting plays to this view that the government will open the door for the BOJ to have a more flexible approach,” he said, “and that some of this uber-undervaluation of the yen can be reversed.”

The yen has been the worst-performing G10 currency this year, with a 15% loss against the dollar, driven mainly by the gap between rising U.S. rates and anchored Japanese rates. Japanese government bonds were sold on Monday morning. [JP/]

The dropped 2% last week. It is down 20% for the year and has failed in several attempts at sustainably trading above its 200-day moving average. rose 0.2% in early Asia trade. [.N]

In Europe, the bond market was caught off guard by an unexpectedly hawkish tone from the ECB.

Softening economic data heading to year-end isn’t offering much help to the mood either, leaving markets wondering where to look for the feel-good vibe that has rallied U.S. stocks in the last two weeks of December 11 times in the last 15 years.

“The Santa rally normally kicks in around mid-December on the back of festive cheer and new year optimism, the investment of any bonuses, low volumes and no capital raisings at this time of year,” said AMP (OTC:) Capital strategist Shane Oliver.

“It has tended to be weaker or less reliable in years when the market is down year to date, though,” he added.

European, Japanese and U.S. business activity shrank in December, surveys showed last week, keeping a bid for the safe-haven dollar and pausing gains for the euro. The euro hit a six-month high of $1.0737 last week, though last bought $1.0598.

Business confidence in China has also hit its lowest the World Economics Survey began collecting data in January 2013 and China’s stockmarkets have struggled to extend a rally unleashed by easing COVID controls. The opened steady.

Hopes for improvements in demand stabilised oil prices on Monday, with futures up 1% at $79.93 a barrel, but it has barely gained for the year. Gold was steady at $1,793 an ounce. remained trading below $17,000.

Stumbling blocks, the map in Italy