Just weeks away from the last roundup of information published by well-known insider Roland Quandt, this time it’s nothing less than Evan Blass to give us more details on what will be the official accessories for the next Galaxy S23, thanks to a rich list recently published on Twitter, with which he confirms us the type and colors of the covers – and not only that – which can be purchased at the time of the launch of the new series of smartphones from the South Korean company.

ACCESSORIES AND COLORS OF THE S23

Starting from S23 we find the Clear Cases and the Clear Gadget Case (transparent), the Leather case (Black, Camel, Green), the Rugged Gadget Cases (Black), the Silicon grip case (Black, White) and lo Smart View Wallet Case (Black, Cream, Green, Lavender), while for S23 Plus the same accessories are provided except for the Smart View covers, which are instead replaced by the silicon case (Cream, Green, Lavender, Navy, Orange).

It’s unclear if the mismatch of some of the case designs is actually Samsung’s choice or if it’s a non-exhaustive list by Blass. The second hypothesis is probably more likely, since the list also includes the protective film exclusive to the S23+ and not to the basic model, which is decidedly unlikely. 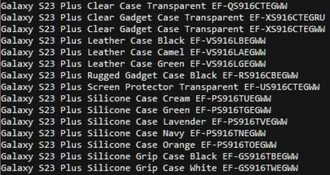 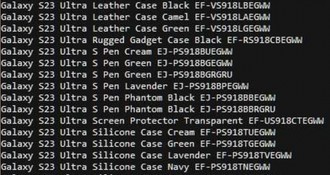 Regarding Galaxy S23 Ultra the most interesting details are those on the different ones S Pen colors, as they directly reflect the colors chosen by Samsung for the smartphone. The details published by Blass are very similar to those shared by Quandt, who had used more generic names for the individual colors, while now we know that S23 Ultra will be offered in Cream, Green, Lavender and Phantom Black variants.

FIRST RENDER OF THE ACCESSORIES

In addition to the details posted by Blass, retailer MobileFun UK has also posted some unofficial renderings of some of the Samsung cases for the S23 Ultra and Galaxy S23, since it has started to list the official accessories for the next top of the range. It is not clear whether the prices listed on the site are the official ones or not, but in any case we point out that the Leather case for S23 Ultra it is proposed a £43.99it Smart View Wallet Case at £36.99 and the silicon case for S23 base (confirming that this accessory will actually be available) is placed at £23.99.

In short, it seems that by now there are few doubts about what the colors and accessories will be for the next top of the range of the Galaxy S23 series. At this point we just have to wait for the announcement by Samsung regarding the Unpacked event during which the new top of the ranges will finally become official.