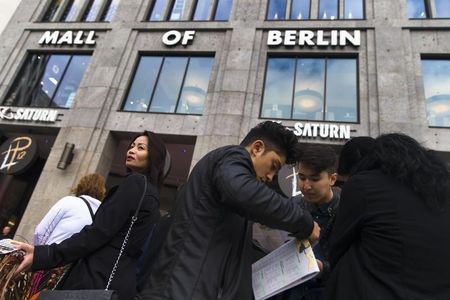 Investing.com — German consumer confidence improved for the third month running, but its recovery is still a hostage to the energy markets, market research firm GfK said on Wednesday.

The company’s index rose to -37.8 for January from an upwardly revised 40.1 in December but remains close to all-time lows as households in Europe’s largest economy face a winter with sky-high energy bills and rising interest rates.

“The light at the end of the tunnel is getting somewhat brighter,” said GfK analyst Rolf Buerkl, pointing to government plans to cap energy prices – albeit at levels well above what Germans have paid in recent years. Berlin approved up to €200 billion (€1 = $1.0633) of borrowing last month to cover expenses for businesses and households arising from the energy crisis.

Other surveys too, including S&P Global‘s and the Ifo , have also turned higher in the last couple of months as the government’s measures – which will run for a year initially – removed some of the uncertainty around the outlook.

However, Buerkl warned that the recovery was still uncertain.

“If, for example, the geopolitical situation should worsen again and lead to a significant rise in energy prices, the light at the end of the tunnel would get dimmer again very quickly, or even be completely extinguished.”

Both components of GfK’s index – personal spending inclination and expectations for the economy – improved. Even so, GfK noted that consumers still expect the economy to fall into recession – albeit not as deep a recession as previously feared.

“This is all good news, but the overall message from the GfK survey remains one of difficult conditions for households,” said Pantheon Macroeconomics analyst Claus Vistesen in a note to clients. “We are also skeptical that the improvement will continue in the first quarter, but a lot will depend on how cold it gets, and the associated draw on gas stocks, which is anybody’s guess at this point.”

In wild twist, Carlos Correa to Mets after deal with Giants collapses

FantaSanremo has become a big thing