Intel, quarterly of ‘float’: focus on cost reduction, including layoffs


Intel closed the third quarter of fiscal 2022 with a turnover of 15.3 billion dollars, down 20% on the same period last year. The company did register a net profit of $ 1 billiona figure in decline of 85% on an annual basis but which is instead positive when compared to the 500 million dollars lost in Q2 2022. Gross margin still low by Intel’s standards, equal to 42.6%, a declining figure by 13.4 points compared to 56% in Q3 2021. 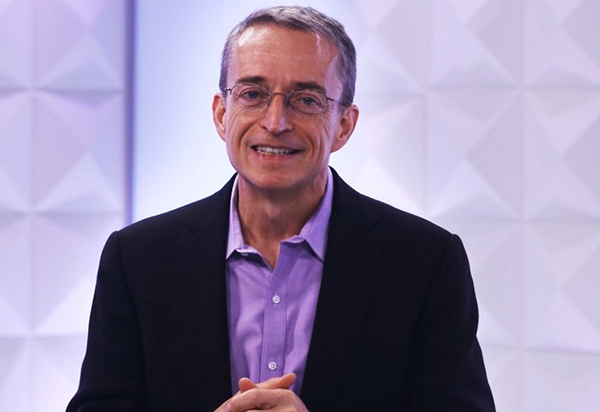 By virtue of these achievements, Intel has revised downward the annual turnover estimates bringing them from the 76 billion expected in the first quarter of this year a 64-64 billion dollars. In the fourth quarter, Intel expects revenue between $ 14 and $ 15 billion and a gross margin of 41.4%.

In this quarterly, Intel discounts $ 664 million in restructuring costs which reflect “initial cost-cutting actions”. At the moment no layoffs have been announced, but will come later in the quarter with the goal of reducing costs by $ 3 billion in 2023, rising to an overall figure of $ 8-10 billion by 2025.

Recently, with regard to redundancies, there was talk of a cut of several thousand employees, but on the sidelines of the conference call with analysts, the CEO clarified that personnel are not the most important item in terms of costs to be reduced. However, this does not mean that intervention will not be decided.

Moving on to the analysis of the divisions we see that the Client Computing Group (CCG) it stopped at a turnover of $ 8.1 billion, down 17% on last year. Operating profit reached $ 1.7 billion, down 54%. 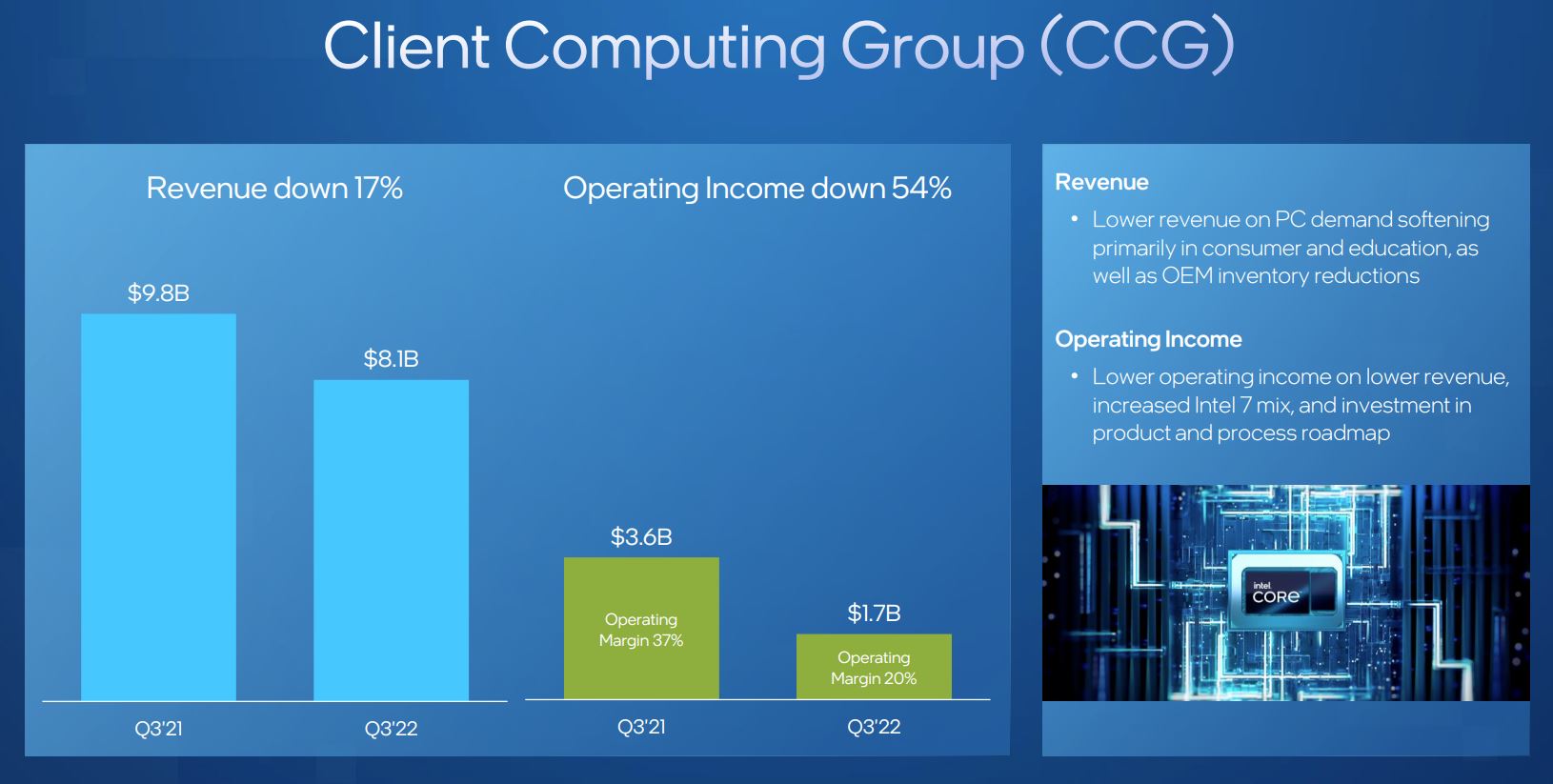 According to Intel, the lower revenues are due to falling demand for PCs in the consumer and school world, as well as the reduction of inventory by OEMs. Operating profit, on the other hand, is affected by lower revenue, higher production with the more expensive Intel 7 process, and investments in future products and manufacturing technologies. 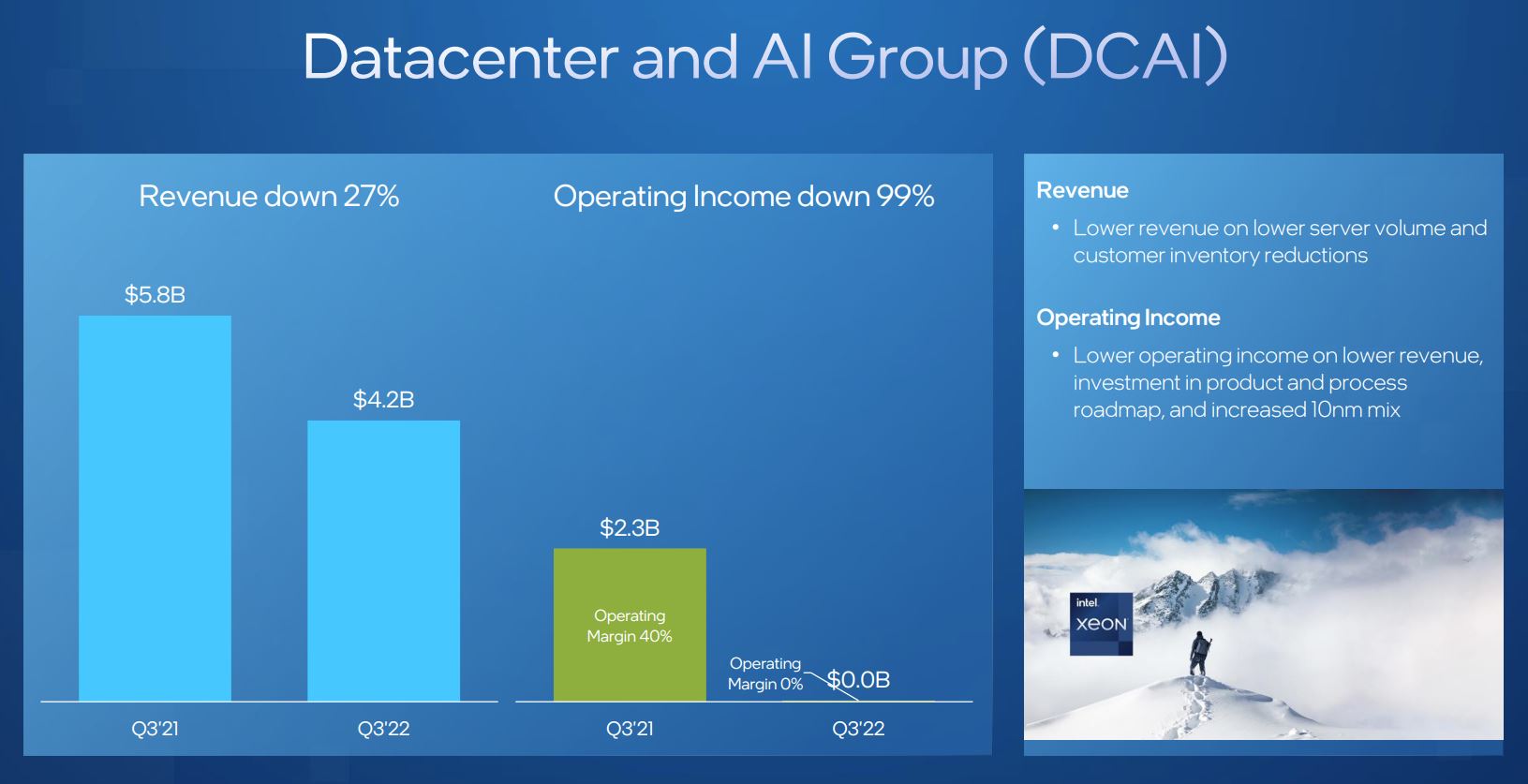 Decline of 27% for the revenues of the Datacenter and AI Group (DCAI) to 4.2 billion dollars, with an operating profit of zero, down 99%. In this case, the reduction in inventory by customers and fewer purchases weigh on revenues, while also in this case the operating profit pays for investments and a more marked use of the 10 nanometer process, more expensive than the 14 nanometers. 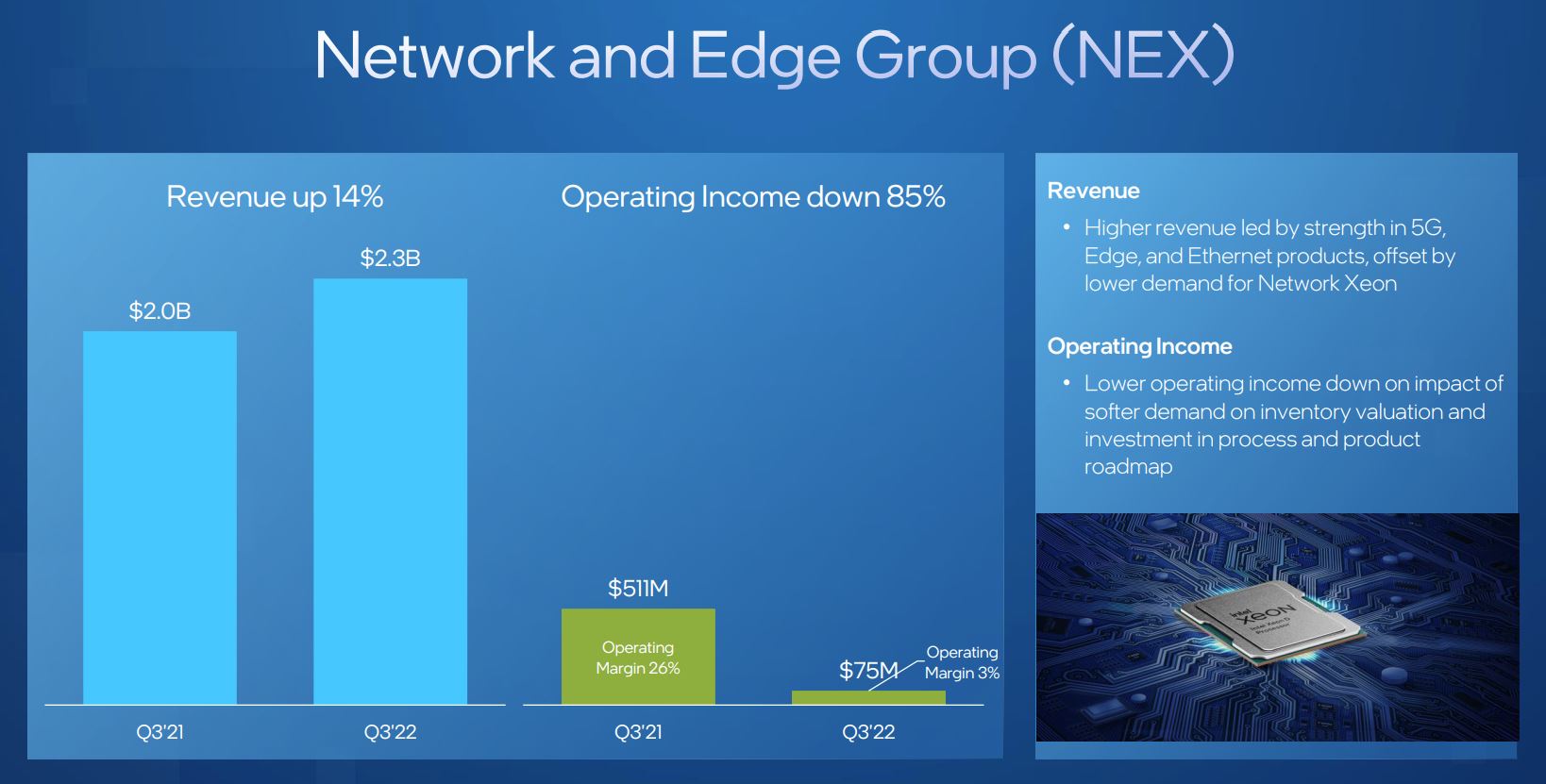 The Network and Edge Group (NEX), Accelerated Computing Systems and Graphics Group (AXG) and Mobileye divisions grow by 14%, 8% and 38% in terms of revenue. It should also be noted that Mobileye was listed on the Nasdaq Stock Exchange this week. The revenue of Intel Foundry Services (IFS), a division dedicated to manufacturing for third parties, fell by 2%. 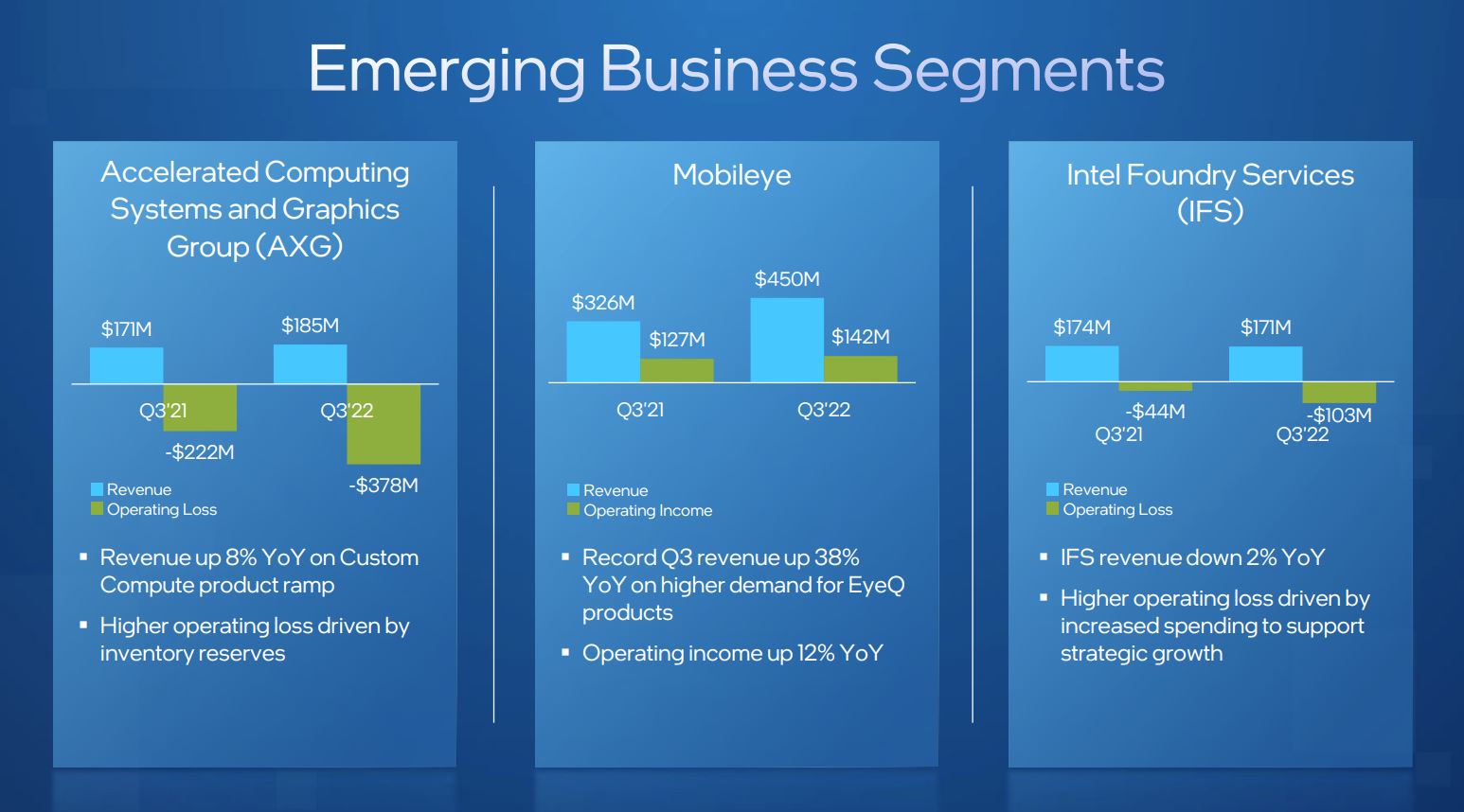 “Despite the worsening economic conditions, we got solid results and made significant progress in executing our products and processes during the quarter, “said Pat Gelsinger, CEO of Intel. Interestingly, the company expects to complete the tape out of a production stepping of the Meteor Lake CPU during the fourth quarter.

Meteor Lake will embody Intel’s first consumer CPU consisting of different tiles (or chiplets), produced with different production processes and by different companies (TSMC). The Compute Tile with x86 cores is being handled by Intel with the “Intel 4” process, for which the company confirms its progress towards high-volume production. The tape out indicated is “the final step to take the 14th generation Cores from the design phase to the first silicon production“. 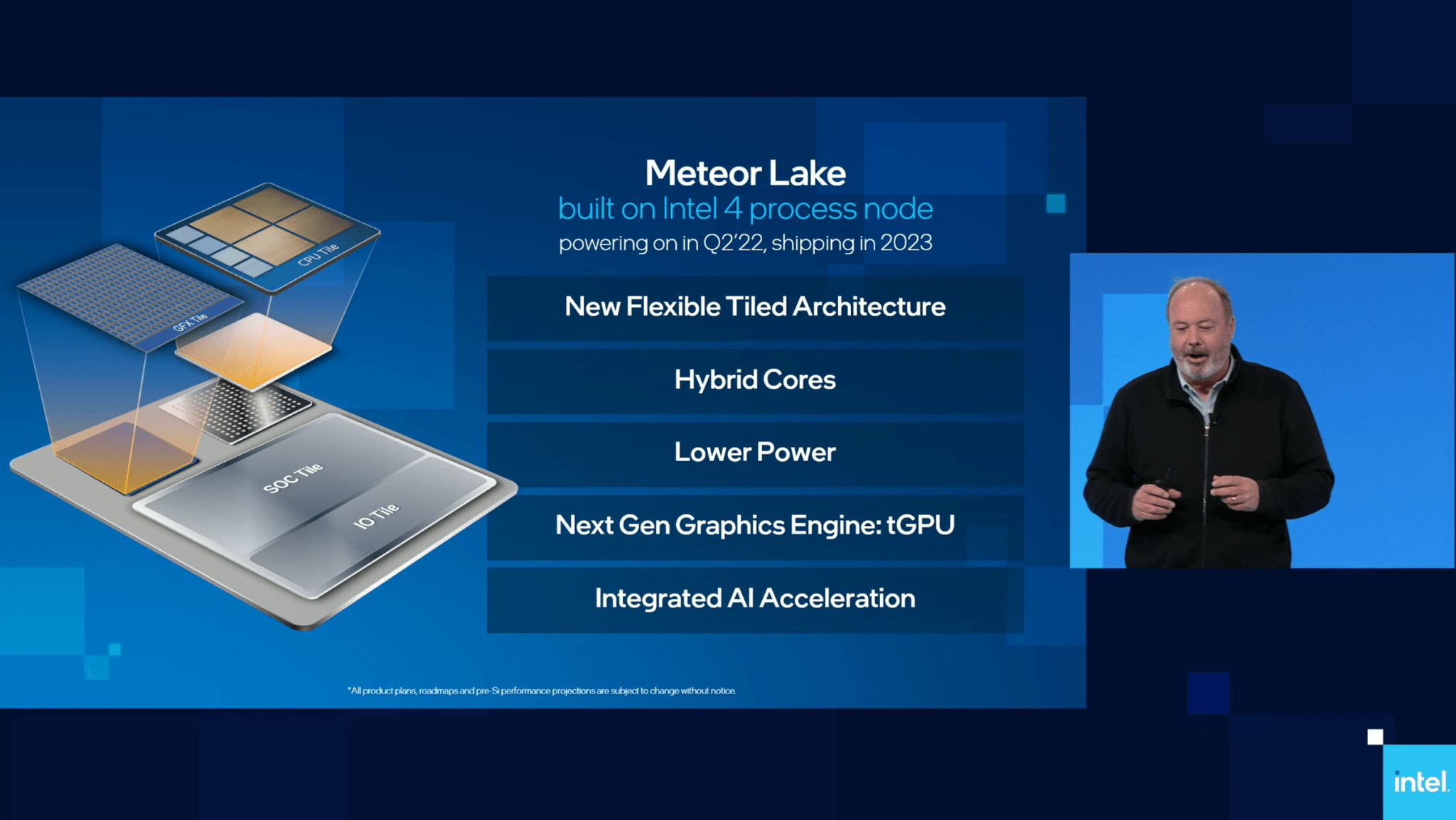 The developments on the other production processes are also reassuring: Intel 3 is proceeding as per schedule, while for Intel 20A and Intel 18A “the first internal test chips from Intel and those of an important potential customer for our factories have passed the tape out and the manufacturing of the products is in progress”. Intel, after years of production problems, aspires to introduce 5 production processes in 4 years: more information on the roadmap in this article.