Shareholders in Chinese electric vehicle (EV) producer Nio (NYSE:) have seen the value of their investment drop more than 59.2% over the past 52 weeks and 30.6% year-to-date (YTD). Meanwhile, the S&P Kensho Electric Vehicles Index is down 14.5% YTD. 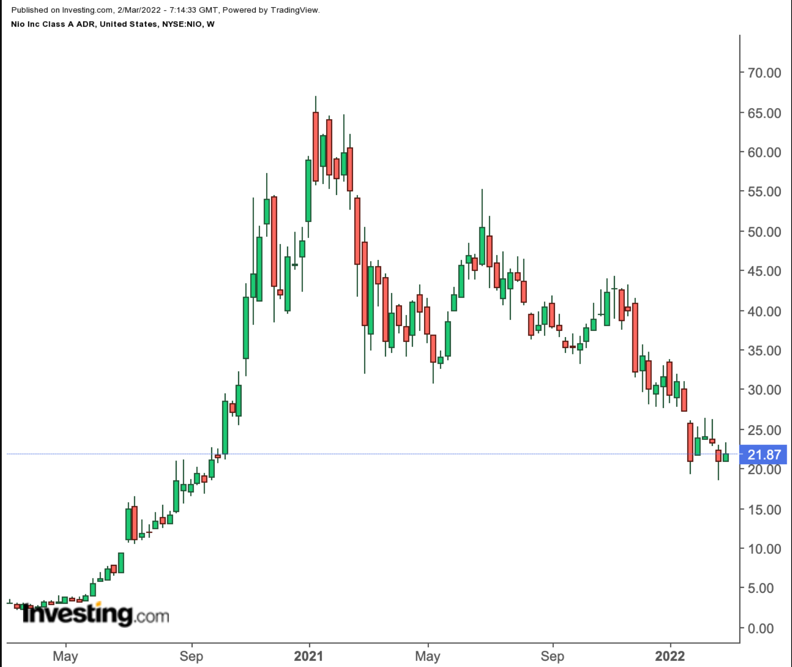 By comparison, we can also look at shares of two other Chinese smart EV producers, namely Xpeng (NYSE:) and Li Auto (NASDAQ:)). Since the start of 2022, XPEV and LI shares have also lost 31.5% and 5.2%, respectively. Meanwhile, EV darling Tesla (NASDAQ:) stock is down 18.5% YTD.

Management has also been preparing for March deliver of its ET7 model. The electric sedan is expected to have a range of up to 1,000 km or over 600 miles.

The carmaker will issue Q4 and FY2021 results on Mar. 24, so further share price volatility is likely around that time.

Next Move In NIO Stock?

However, according to a number of valuation models including P/E or P/S multiples, or terminal values, the average fair value for Nio stock is $20.84.

Put another way, shares could decline close to 5% from the current level.

Readers who watch technical charts might be interested to know that a number of Nio’s short- and intermediate-term oscillators are oversold. Although they can stay extended for weeks—if not months—the decline in price could also be coming to an end.

Our expectation is for NIO to find strong support around the $20 level. Although it might initially dip below it, shares are likely to bounce back before too long. Afterward, Nio stock would likely trade sideways while it establishes a new base.

Investors who are not concerned with daily moves in price and who believe in the long-term potential of the company could consider investing in NIO stock now. They could expect the shares to make a move toward $51.72, or analysts’ price target.

Those who are experienced with options could also consider selling a cash-secured put option in NIO stock. As it involves options, this setup will not be appropriate for all investors.

Such a bullish trade could especially appeal to those who want to receive premiums (from put selling) or to possibly own NIO shares for less than their current market price of $21.87.

A put option contract on NIO stock is the option to sell 100 shares. Cash-secured means the investor has enough money in his or her brokerage account to purchase the security if the stock price falls and the option is assigned. This cash reserve must remain in the account until the option position is closed, expires, or is assigned, which means ownership has been transferred.

Let’s assume an investor wants to buy NIO stock but does not want to pay the full price of $21.87 per share. Instead, the investor would prefer to buy the shares at a discount within the next several months.

One possibility would be to wait for NIO stock to fall further, which it might or might not do. The other possibility is to sell one contract of a cash-secured NIO put option.

So, the trader would typically write an at-the-money (ATM) or an out-of-the-money (OTM) put option and simultaneously set aside enough cash to buy 100 shares of the stock.

So, the seller would have to buy 100 shares of Nio at the strike of $20 if the option buyer were to exercise the option to assign it to the seller.

Assuming a trader would enter this cash-secured put option trade at $21.87 now, at expiration on May 20, the maximum return for the seller would be $232, excluding trading commissions and costs.

The seller’s maximum gain is this premium amount if Nio stock closes above the strike price of $20. Should that happen, the option expires worthless.

Cash-secured put selling is a moderately more conservative strategy than buying shares of a company outright at the current market price. This can be a way to capitalize on the choppiness in Nio stock in the coming weeks.

Investors who end up owning NIO shares as a result of selling puts could further consider setting up covered calls to increase the potential returns on their shares. Thus, selling cash-secured puts could be regarded as the first step in stock ownership.