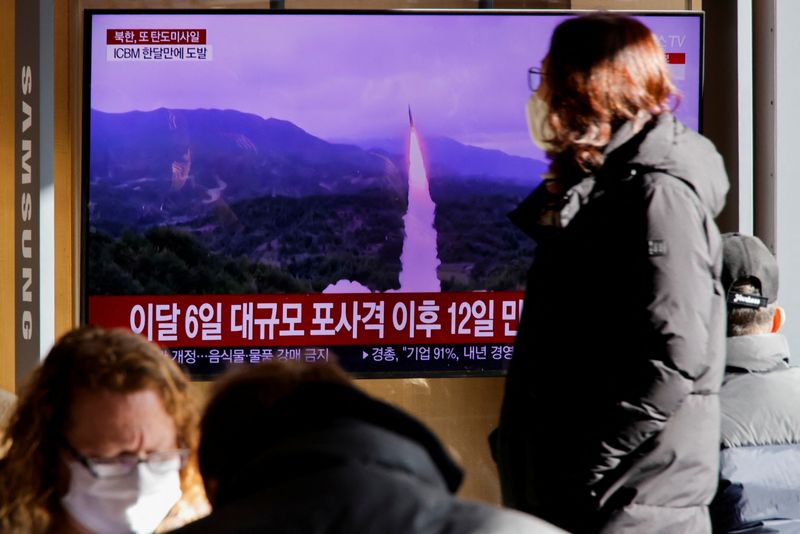 © Reuters. A woman walks past a TV broadcasting a news report on North Korea firing a ballistic missile off its east coast, in Seoul, South Korea, December 18, 2022. REUTERS/ Heo Ran

SEOUL (Reuters) -North Korea’s state media KCNA said on Monday the country conducted an “important, final phase” test on Sunday for the development of a spy satellite, which it seeks to complete by April 2023.

The report was released a day after the South Korean and Japanese militaries reported the isolated North’s launch of two intermediate-range ballistic missiles towards its east coast.

Pyongyang’s National Aerospace Development Administration (NADA) conducted the test at its Sohae satellite launching station in the northwest to review its capability of satellite imaging, data transmission and ground control systems, according to KCNA.

A vehicle carrying a mock satellite, which also included multiple cameras, image transmitters and receivers, a control device and a storage battery, was fired at the “lofted angle” of 500 km (311 miles).

“We confirmed important technical indicators such as camera operating technology in the space environment, data processing and transmission ability of the communication devices, tracking and control accuracy of the ground control system,” a NADA spokesperson said in the KCNA dispatch.

See also  Holiday quiz! See how well you know these festive facts about the holiday season

The spokesperson called the test a “final gateway process of launching a reconnaissance satellite” which will be completed by April.

KCNA also released two black-and-white, low-resolution images of the South Korean capital Seoul and nearby port city of Incheon, which it said were taken during Sunday’s launch.

North Korea has conducted an unprecedented number of missile tests this year, including an intercontinental ballistic missile (ICBM) designed to reach the U.S. mainland, in defiance of international sanctions.

On Friday, the North tested a high-thrust solid-fuel engine which experts said would facilitate quicker and more mobile launch of ballistic missiles, as it seeks to develop a new strategic weapon and speed up its nuclear and missile programmes.

Pyongyang has tested satellite systems during several rocket launches, and leader Kim Jong Un has said its pursuit of a spy satellite is meant to provide real-time information on military actions by the United States and its allies.

South Korea’s presidential office strongly condemned the North’s latest launch, saying its continued provocations and nuclear and missile development would only endanger its own regime.

Gate.io experiences slowdown in deposits and withdrawals due to node maintenance

Condemned to DEBT: Sam Bankman-Fried and the Crypto Scandal: Lessons for Average Americans