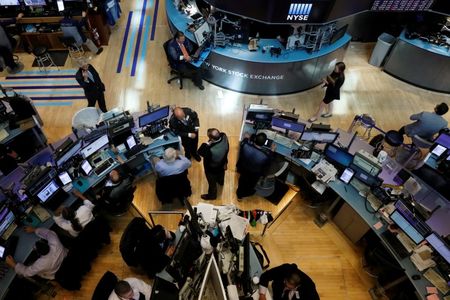 Investing.com — Federal Reserve Chair Jerome Powell gets another chance to rain on the bulls’ parade with a speech at the Brookings Institute. A second reading of U.S. GDP will likely revise the initial numbers higher but more timely data are set to reaffirm the pattern of a cooling economy. China’s COVID battle takes a turn for the better, as does the Eurozone’s battle with inflation – in both cases leaving plenty still to do. Sam Bankman-Fried appears alongside Treasury Secretary Janet Yellen to say his peace about FTX’s collapse, and oil prices hit their highest in a week after another big drop in U.S. stockpiles. Here’s what you need to know in financial markets on Wednesday, November 30th.

Federal Reserve Chair gets another chance to rain on market hopes for a dovish pivot in a speech at a Brookings Institute event at 13:30 ET (18:30 GMT).

Powell has already felt it necessary to pour cold water on such hopes at the Fed’s Jackson Hole symposium and again at the last central bank policy meeting. However, every new piece of economic data pointing to a slowdown makes it that little bit harder for him to stick to that line.

And there’s plenty of data on show today, notably with a second reading of third-quarter numbers at 08:30 ET. That’s expected to be revised up a little owing to the strength of consumer demand as evidenced in monthly personal consumer expenditures numbers.

Of more timely significance is the survey for November, due at 08:15 ET, and the Labor Department’s survey for October, both of which are expected to reaffirm the pattern of a cooling labor market.

The Eurozone’s rate failed to drop below 10% in November, disappointing hopes raised by weak and numbers on Tuesday. Stronger-than-expected numbers out of were the fly in the ointment. The decline in the annual rate to 10.0% was the first in over a year, but was due almost exclusively to volatile energy prices and base effects. The rate of stayed at 5.0%, two and a half times the European Central Bank’s target.

Analysts said the data raised the chance of the slowing the pace of its interest rate increases next month with a hike of only 50 basis points (after 75 basis points each at its last two meetings). However, board member Isabel Schnabel pushed back on social media against such “overinterpretation”.

A raft of GDP revisions across the Eurozone did nothing to change the overall picture, but as in the U.S., more up-to-date data confirmed the slowdown trend as surprised to the upside.

U.S. stock markets are set to open mixed later, after a correspondingly mixed set of results from some big IT companies late on Monday.  (NASDAQ:) slumped nearly 20% after the cyber-security provider said the outlook for the current quarter is weaker than hoped, but (NASDAQ:) surged after posting better-than-expected billings. Software earnings continue after the bell today with Salesforce (NYSE:) reporting.

There’s continued support to sentiment from China, where there are increasingly clear signs of the authorities committing to the gradual lifting of COVID-19 controls. Such hopes outweighed disappointingly weak purchasing manager indices earlier, which showed activity contracting more sharply in November.

4. SBF to speak at NYT event

Sam Bankman-Fried, the founder of collapsed crypto exchange FTX, is due to speak at an event hosted by the New York Times.

His appearance alongside Treasury Secretary Janet Yellen is likely to be controversial, given the allegations of misappropriation of customer funds and the prima facie evidence of egregiously poor corporate governance up to the time FTX collapsed.

The partisan aspect of that controversy is, however, set to be mitigated after ‘SBF’ told a reporter that he spent as much on donations to the Republican Party this year as to the Democratic Party. Bankman-Fried said he kept the donations ‘dark’ in order to avoid ‘freaking out’ reporters who he claimed are all “secretly liberal”.

Sentiment in crypto markets continues to heal at a snail’s pace, with rising nearly 3% overnight to test the $17,000 level.

Crude oil prices rose on the improving COVID news out of China, where national case numbers fell and the city of Guangzhou said it will relax some restrictive measures.

However, gains were limited by the news that the so-called OPEC+ bloc will hold its next policy meeting on Sunday in virtual format, which was interpreted as making a simple rollover of production quotas the most likely outcome. Signs of a global economic slowdown in recent days and weeks had prompted some speculation of an output cut to defend current price levels.

Is Mexico out of the World Cup? Not yet. Here's what El Tri needs advance to knockout round