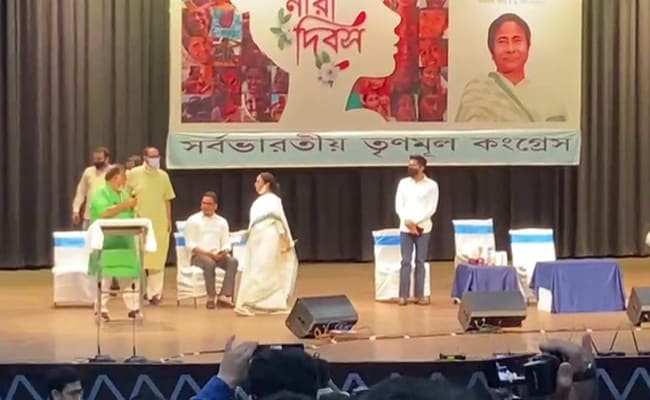 Amid fierce speculation over his ties with the Trinamool Congress, poll strategist Prashant Kishor shared the stage today with Mamata Banerjee and her nephew Abhishek Banerjee at a party meeting.

On stage at the Trinamool state committee meeting in Kolkata, Prashant Kishor was flanked by the party’s state president Subrata Bakshi and other senior leaders.

Mr Kishor’s I-PAC has been caught in a perceived feud within the Trinamool Congress, with Mamata Banerjee seen to be wary of her increasingly ambitious nephew.

Abhishek Banerjee is seen as the main liaison between the party and I-PAC, which has worked with the Trinamool since its spectacular victory in the Bengal election last year.

The rift widened over Abhishek Banerjee’s reported push to promote a ‘One Man, One Post’ policy in the party, resented by some of the party’s older guard, some of whom hold multiple posts within the ruling establishment.

Last month, a public spat erupted between Trinamool leader Chandrima Bhattacharya and I-PAC after she alleged that her social media accounts had been “misused” by Prashant Kishor’s team – a claim that was promptly challenged.

I-PAC denied the charge and said: “I-PAC doesn’t handle any digital properties of @AITCofficial or any of its leaders. Anyone making such claim is either uninformed or is blatantly lying. AITC should look into if and how their digital properties and/or that of their leaders are being ‘allegedly (mis)used’.”

‘Not everyone can be an Arthur Ashe’: How a tennis legend created the blueprint for athlete activism