Despite the season, there’s little cheer on Wall Street. There are growing signs that a recession looms in the first half of next year. Following last week’s softer-than-expected reading, optimism was briefly seen as stock indices climbed further above respective 200-day moving averages. The bulls were feeling hopeful that a tame inflation situation versus a steeply rising CPI rate earlier in 2022 could allow the Fed to ease off the brake pedal.

The Grinch snatched that good feeling from investors as soon as Powell left the podium at his press conference on Wednesday. kept its very hawkish tone despite reducing the pace of rate hikes from 0.75 percentage points to just a 50 basis point increase last week. Stocks never recovered through the close on Friday and have now fallen about 6.5% from the opening print post-CPI last Tuesday.

S&P 500 Rallies Above its 200-Day Moving Average, Then Stumbles

One niche of the domestic equity market that had been a darling in value investors’ eyes is regional banks. The SPDR S&P Regional Banking ETF (NYSE:) got off to a hot start on the year, outpacing the SPDR S&P 500 (NYSE:) by about ten percentage points through early March as interest rates rose and the rallied. The relative gains continue through the summer and even into the fourth quarter. The narrative was that higher interest rates should be a boon for domestic depository institutions. And if lending rates held up, that could further bolster profits for many of these small and mid-sized U.S. banks.

See also  How an Iran Nuclear Deal Could Affect Oil, Trade and Security

Those value investors have received a lump of coal in their safe deposit boxes lately, however. KRE has fallen hard from its mid-August high, breaking under the fund’s September and October lows. It is now testing 52-week lows notched in June. That bearish turn came after strong outperformance up through that pivotal day two months ago – October 13 is when the market reversed higher following the September CPI report. It turned out it also may have been the short-term peak in this relative value trade.

KRE: Once a Market Leader, Shares Now Below Their October Lows I see the breakdown in regional banks as a potentially bearish harbinger for the broad market. The industry is often seen as an economic bellwether, and it was also leading price action for much of 2022. That combination makes KRE a critical ETF to watch heading into year-end. 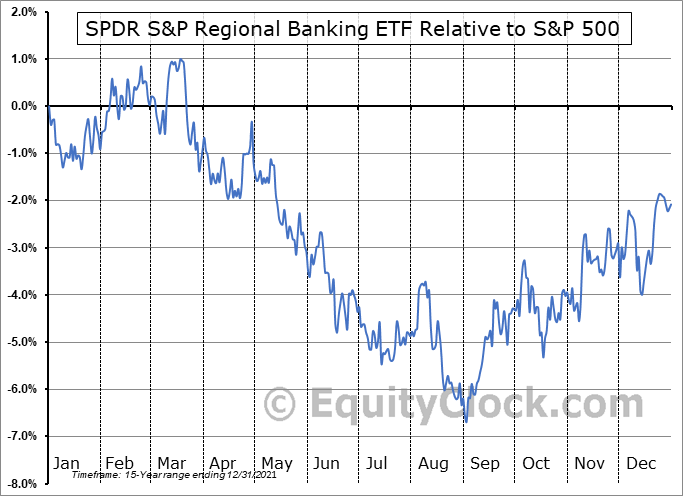 A final point that is an arrow in the bears’ quiver right now is seasonality. According to Equity Clock, KRE typically rallies this time of year on an absolute and relative basis. We are not seeing that this time around, though. When usual seasonal trends fail to materialize, it’s something to pay attention to.

Investors should monitor price trends in the regional banking ETF for clues on where the economy might be headed. With recession risks mounting for the first half of next year, certain stocks may tell us about the state of the economy before lagging economic indicators will.

Disclaimer: Mike Zaccardi does not own any of the securities mentioned in this article.

Watch All the Goals From the Incredible World Cup Final