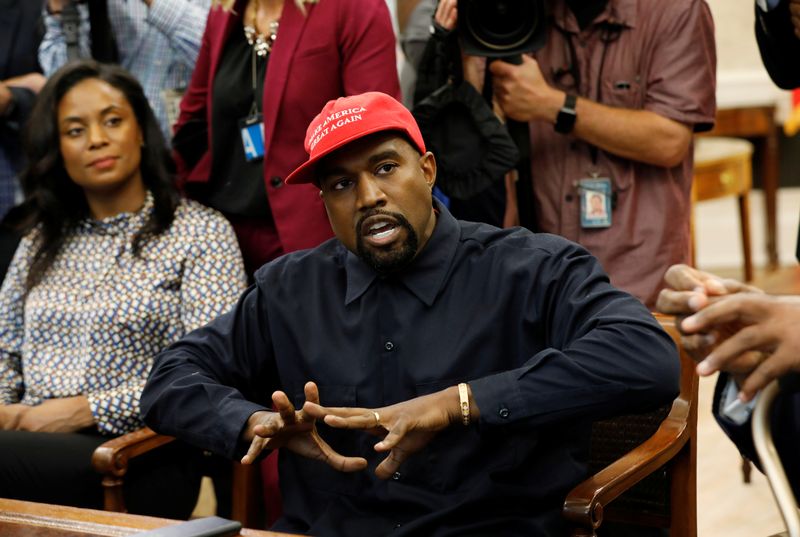 (Reuters) – As corporations around the world including Adidas AG (ETR:) cut ties with Kanye West, music streaming service Spotify Technology SA (NYSE:) said it would not remove the rapper’s music unless his label requested it.

Recent antisemitic remarks made by the rapper are “just awful comments,” and would have warranted removal from Spotify for violating its policies, which prohibit hate speech, if they had been on a podcast or recording, Ek said.

But none of that content can be found on Spotify.

“It’s really just his music, and his music doesn’t violate our policy,” said Ek, adding, “It’s up to his label, if they want to take action or not.”

That has not happened.

Universal Music (AS:)’s Def Jam label, which owns the copyright to West’s recordings from 2002 through 2016, and continued distributing his releases until last year, issued a statement condemning Ye’s remarks, saying “There is no place for antisemitism in our society”.

It did not ask for the removal of Ye’s recordings, many of which are critically acclaimed works. The music also can be found on Apple (NASDAQ:) Music and YouTube Music.

Hollywood power broker Ari Emanuel called for the major streaming services to end their business relationships with Ye after the rapper promoted antisemitic conspiracy theories in interviews and on social media, where he Tweeted that he would go “death con 3 On JEWISH PEOPLE.”

Since the remarks, Ye has lost high profile and lucrative partnerships. Creative Artists Agency, one of the world’s largest talent agencies, no longer represents him, film and television studio MRC Entertainment has dropped a documentary and sneaker-maker Adidas (OTC:) on Tuesday ended a partnership estimated to be worth more than $500 million in royalty payments and other fees.

Spotify, however, has faced backlash when it punished musicians for their personal misconduct.

The streaming service removed R Kelly’s music from its playlists and recommendations in 2018 following allegations of sexual misconduct. It walked back the policy after other artists threatened boycotts, giving users a mute button to block particular artists, instead.

If Ye’s label asks for the rapper’s catalog to be removed, Ek said, “Obviously we’ll respect their wishes.”

When will Android 13 and One UI 5.0 arrive on my smartphone? Samsung reveals it

‘Nature is striking back’: flooding around the world, from Australia to Venezuela | Flooding

Flossie, world’s oldest cat, is about to turn 27 years old