UP Officer To Be Suspended After Akhilesh Yadav’s “EVM Chori” Video: Sources 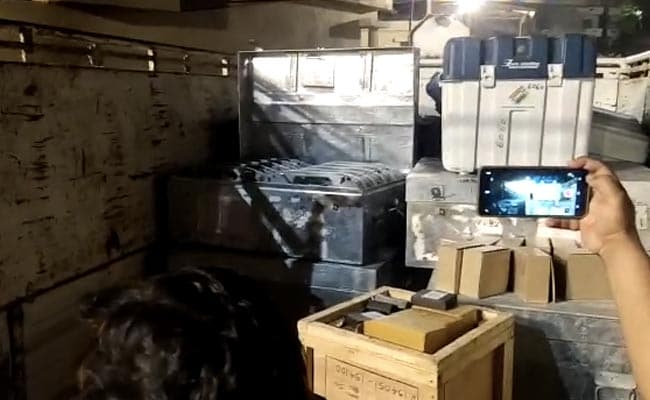 The opposition Samajwadi Party had accused the government of “stealing the election” yesterday.

A senior administration official of Varanasi will be suspended in connection with the row over voting machines that erupted in Uttar Pradesh yesterday, two days ahead of counting.  Sources said the Election Commission of India has ordered action against Varanasi Additional District Magistrate NK Singh over the violation of rules in transportation of training EVMs. The city police commissioner admitted to lapses yesterday.

In a statement today, Mr Singh’s boss — District Magistrate Kaushal Raj Sharma — said the EVMs were supposed to be moved this morning, but the official who is now suspended, had taken them out the night before without informing anyone.

The opposition Samajwadi Party had accused the government of “stealing the election” yesterday after a truck carrying voting machines was intercepted by party workers in Varanasi.

Party chief Akhilesh Yadav had pointed out that in 2017, around 50 seats were won by the BJP with a less than 5000 vote margin. He had also added that information of “violations in EVMs” were coming from various districts and demanded that the Election Commission “must clarify”.

Today, his party had tweeted a video of Varanasi’s Commissioner Deepak Agarwal conceding there were “lapses”.

Mr Agarwal, however, did not specify the lapses and maintained that the machines in question were meant for training purposes.

“If you talk about the protocol for the movement of EVMs, there was a lapse in the protocol, I accept that. But I can guarantee you, it is impossible to take away machines used in voting,” he was heard saying in the video.

Sharing the video on Twitter, the Samajwadi Party had said it was an admission that protocol was not followed.

Samajwadi Party chief Akhilesh Yadav had said yesterday that whenever Electronic Voting Machines – be it training or reserve machines — are moved out, candidates or party workers have to be informed and this was not done.

The party filed a complaint with the Election Commission and said it would go to court over the issue.