Black Panther: Wakanda Forever – 10 Wakandans Who Should Join The MCU Next


Wakanda will soon be back on the big screen, and many MCU fans await Black Panther: Wakanda Forever with nervous anticipation. Following the tragic passing of Chadwick Boseman in 2020 and the tepid response to Phase Four, expectations are exceptionally high for the Black Panther sequel with many hoping it will exceed the hype and high praises it has received so far. A few big questions are hanging over the film – namely who the next Black Panther is and how the film will close out Phase Four while setting the stage for Phase Five and beyond.

While there hasn’t been any official confirmation, many are already assuming a Black Panther 3 is in sight for Marvel. Furthermore, a while back it was announced that Ryan Coogler would produce a Disney+ series set in Wakanda – presumably focusing on Okoye and the Dora Milaje. With those in mind and other upcoming projects, there are several potential avenues to introduce these Wakandan heroes and villains to the MCU.

The biggest name related to Wakanda missing from the MCU right now is, of course, Storm. Ororo Munroe was born in Kenya and raised in Egypt – where she was a god to the locals in Marvel Comics, an interesting notion to think about with the likes of Thor and Loki – but she came to call Wakanda a home when she married T’Challa for a time. She served as the queen consort of Wakanda and many assumed she might take a similar path in the MCU.

Some even thought that Michaela Coel could’ve been playing Storm in Black Panther: Wakanda Forever before her true role was revealed. Nevertheless, as mutants become more of a mainstay in the franchise, the weather vane is signaling Storm’s impending arrival. Most likely, she’ll come into play in whatever form the X-Men film takes or even in Deadpool 3, which might merge the MCU and Fox universes. 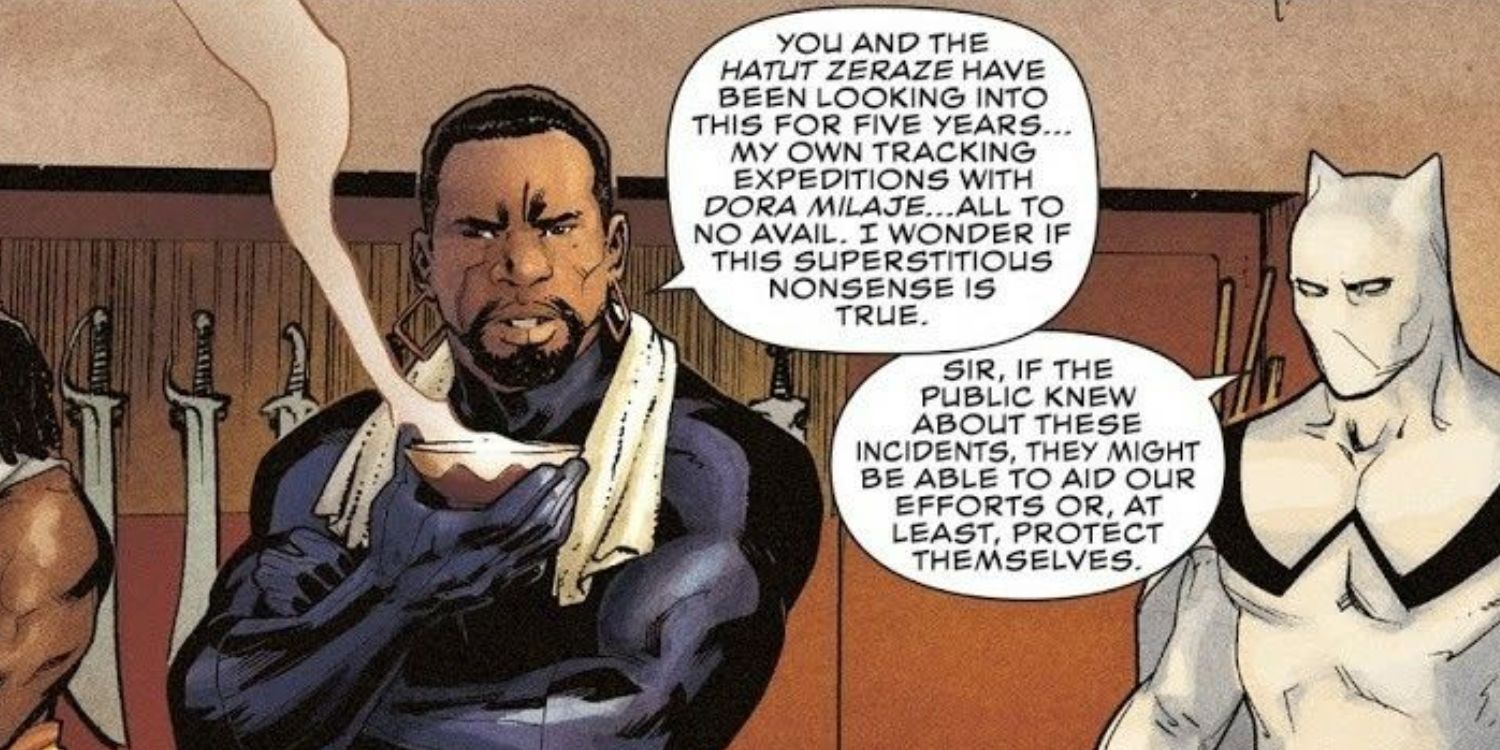 In Black Panther, Sterling K. Brown played N’Jobu, T’Chaka’s brother. However, in the comics, that character is named S’Yan. The relationship between the brothers was much stronger, and after T’Chaka’s death, S’Yan became the next Black Panther until T’Challa was worthy enough to take the throne.

As he was omitted from Black Panther, it might be difficult to see a place for S’Yan in the MCU going forwards. Yet, they could simply alter the familial connection to have him as Queen Ramonda’s brother, so he can serve as an advisor to the new Black Panther. If the proposed Disney+ show delves into the past, he could also be shown there if he had been killed off earlier.

Not all Wakandans need to feature in a future Black Panther story as is the case for Zawadi. She is a monster hunter, a compatriot with Ulysses Bloodstone, so her introduction could come as the MCU expands its scope into the monster-filled horror realm. There’s hope that following the popularity and positive response to Werewolf by Night, there could be more Halloween Specials to feature characters worthy of helming their own, so Zawadi could come into play there.

That might mean she is on the opposite side as Werewolf by Night, Elsa Bloodstone, and Man-Thing. However, if they go by her abilities in the comics, she’d be a very formidable foe as she stole and consumed one of Wakanda’s heart-shaped herbs, making her as swift and strong as Black Panther.

If they are looking for a good antagonist for Okoye’s Disney+ show, they needn’t look further than Tetu. He is a relatively recent introduction to the comics – first appearing in Black Panther Vol. 6 #1 – but he could be a good adversary for Okoye and the Dora Milaje. He has the strange ability to control nature and teams up with a fellow revolutionary named Zenzi from another fictional country, Niganda, who can empathically manipulate people.

Together they would lead a revolt and attempt a coup in Wakanda, which could be an interesting storyline to incorporate into the MCU as it would showcase more people outside the splendor of the royalty and inner circle ruling Wakanda. Alternatively, this could be a good story for Black Panther 3 if they’d want to go back to the first film’s heightened, yet insular stakes.

Whoever the new Black Panther is – whether it is Shuri as most are presuming – they’ll need guidance in their new role as Wakanda’s ruler and champion. Thankfully, there are many great former Black Panthers they could call up for advice, including Azzuri the Wise. He is T’Challa and Shuri’s grandfather who served as the Black Panther throughout World War II in the comics, which led him to work alongside Captain America.

Should they return to the Astral Plane, he’d be a character worthy of highlighting to showcase Wakanda’s history. They could also do this with former Black Panthers such as Nehanda from the Middle Ages or Bashenga, the first Black Panther in the MCU. Additionally, they could incorporate Mosi, the first Black Panther in the comics who would serve on the Avengers of 1,000,000 BC – a story that could fit well if they’d want to do a prehistoric action project as some Redditors hope the MCU could tackle as a genre.

T’Challa and Shuri’s family is a lot more complicated in the comics as they have two other siblings. The first is Hunter, aka White Wolf, an adopted brother who could become a mercenary and adversary to his brother – a character not likely to ever appear in the MCU. The other is their half-brother, Jakarra. He is the son of T’Chaka and a Wakandan spy, Mateena.

Jakarra’s story does partly parallel Killmonger’s in Black Panther as the long-lost royal who returns to Wakanda to claim their birthright. However, while Killmonger took control and got his own Black Panther suit, Jakarra instead meddles with the outcast Hyena Clan and establishes an interesting connection with Latveria, home to Doctor Doom. He also infused his body with vibranium, mutating himself into a powerful beast capable of absorbing and redirecting energy. The familial connection could be reworked in the MCU, but Jakarra could be another interesting antagonist in a Disney+ series.

While the proposed Disney+ series will hopefully showcase Okoye, Aneka – played by Michaela Coel – and Ayo predominately, it can also introduce some cool new characters, such as Queen Divine Justice. Born Chante Giovanni Brown, she is actually a princess of the Jabari tribe and M’Baku’s cousin, but she was raised in America unaware of her true heritage.

She does eventually learn the truth and ends up joining the Dora Milaje. She’d make for an interesting and unorthodox new recruit, which gives her a good chance of appearing. They will, however, have to do some reworking about her strained allegiances since the Jabari tribe is heroic and allies to the Black Panther in the MCU rather than enemies.

​​​​​​Queen Divine Justice is joined by another character who could be a worthy inclusion to a future MCU project, Vibraxes. N’Kano is a mutant capable of controlling vibrations and creating destructive shockwaves – like Quake from Agents of SHIELD – thanks to an accident that infused him with vibranium. He would go on to be part of the Fantastic Force, a super-team that took over for the Fantastic Four following Mr. Fantastic’s death and their disbanding.

Vibraxes and Queen Divine Justice become romantically linked, which was a big deal in the comics – although it wouldn’t be in the MCU since the Dora Milaje are shown to have romantic partners. If she ends up coming to the MCU, Vibraxes is likely there alongside her.

Another cool Wakandan mutant is Nezhno Abidemi, aka Gentle, who was first introduced in 2006. He is best recognized by his vibranium tattoos that seemingly help him keep his intense powers in check and help him stay in control. He is incredibly powerful, being able to increase his muscle mass, strength, and durability to rival Colossus and even the Hulk. However, what sets him apart is that his codename describes his pacifist and meditative nature.

Following the revelation in Ms. Marvel, mutants are coming, but there are much more prominent and popular X-Men who will need to feature in the MCU before Gentle’s time can come. He could still be teased in an easter egg of sorts, perhaps referencing a character with his powers or the practice of vibranium tattoos. Yet, when the opportunity presents itself, they shouldn’t hesitate to introduce him.

Another Wakandan who will likely not come to the MCU anytime soon, but should down the line is Tosin Oduye. He isn’t even a year old in the comics – having been introduced in January 2022 in Black Panther Vol. 8 #3 – yet he has great potential. Like Gentle, he also has Vibranium tattoos, which he uses to channel energy, but he was raised to shun the technology most Wakandans have grown accustomed to.

He would become Wakanda’s stalwart defender, working alongside Black Panther, Shuri, and the Dora Milaje to protect the country from invaders – although he didn’t like how they were running things. As his story continues to unfold in the pages, hopefully, there will be more for the MCU to play with, so Tosin could have a future on the big screen.

'DOT is not a security. It is merely software' By Cointelegraph

Black Friday continues: here are the active offers that will end very soon (you can save up to 60%, watch out for Lego)!