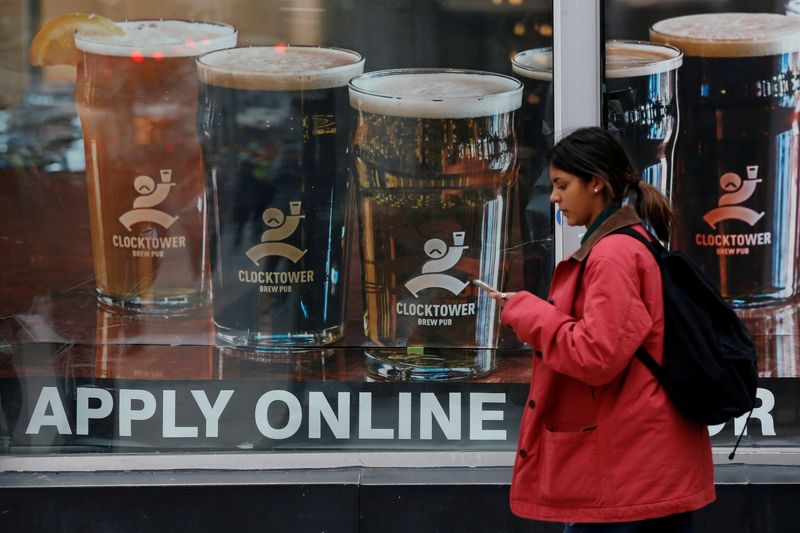 The unexpectedly strong jobs figures came just a week after Canada’s central bank surprised markets with a smaller-than-expected interest rate increase, hiking by 50 basis points to 3.75% and signaling its tightening cycle was nearing its peak.

While other data will be coming before the next BoC rate meeting in December, the jobs surge suggests another 50-basis-point increase may be coming, he added.

The employment report bolstered money market bets on a 50-basis-point increase in December, with investors signalling a roughly 65% chance, up from 50% before the data. The policy rate is now seen peaking at 4.5% early next year.

October’s monster gain was entirely in full-time work, spread across both the goods and services sectors. The average hourly wage for permanent employees rose 5.5% in October on a year-over-year basis, up from 5.2% in September.

Total employment edged just above May 2022 levels, entirely unwinding a summer’s worth of weakness.

But analysts noted the six-month rolling average for jobs was less impressive than October’s strong showing, averaging under 10,000 a month, suggesting a more subdued upward march.

“One of the big takeaways is that employment data in Canada has been notoriously volatile over the last five or six months,” said Darcy Briggs, portfolio manager at Franklin Templeton Canada.

“The moving average is increasing, although a lot slower than the headline would suggest.”

Canada’s total labor force in October was bigger than it has ever been, bolstered by strong immigration, while the employment rate for immigrants was at its highest level on record.

Prime Minister Justin Trudeau’s government this week set out its new immigration targets, saying it will welcome 1.45 million new permanent residents over the next three years to help deal with the extremely tight labor market.

The Liberal-led government also set out billions in new spending on Thursday to support low-income workers, among other things.

Cyber ​​attacks up 28%. Education remains the most targeted sector. The Check Point point