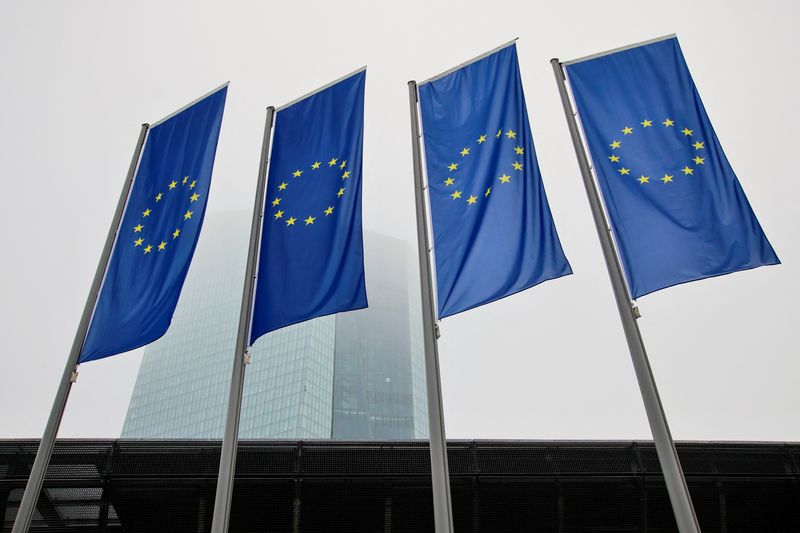 © Reuters. The building of the European Central Bank (ECB) is seen amid a fog before the monthly news conference following the ECB’s monetary policy meeting in Frankfurt, Germany December 15, 2022. REUTERS/Wolfgang Rattay

BENGALURU (Reuters) – Euro zone business activity shrank at the slowest pace in four months in December, suggesting a likely recession ahead will be shallower than previously thought, a survey showed on Friday, while prices rose at the most modest rate in about a year.

S&P Global (NYSE:)’s flash Composite Purchasing Managers’ Index (PMI), seen as a good gauge of overall economic health, rose to a four-month high of 48.8 this month from 47.8 in November, higher than the median Reuters poll forecast of 48.0.

But December was the sixth month below the 50 mark separating growth from contraction, the longest streak of a downturn since June 2013.

“The rise in the purchasing managers’ indices gives us hope that the recession in the euro area will be very mild. Nevertheless, we should not rejoice too soon. The economic environment has clouded noticeably,” said Christoph Weil, senior economist at Commerzbank (ETR:).

Still, the downturn in German economic activity eased for the second straight month as retreating price pressures bolstered the view that a milder recession lies ahead, a sister survey showed.

However, French business activity shrank at a faster rate, adding to signs of a recession ahead for the euro zone’s second-biggest economy as inflation hits businesses.

“The flash PMIs for December provide more evidence that businesses in some parts of the euro zone have become a bit less gloomy about their current situation – but they still point to a combination of recession and very high inflation,” said Andrew Kenningham, chief Europe economist at Capital Economics.

Despite the rising risks of an economic downturn, the European Central Bank hiked its key deposit rate to 2% from 1.5% on Thursday and hinted more would come as inflation is still far above its target rate of 2%.

Higher interest rates coupled with cost-of-living concerns mean demand is likely to weaken further, a view shared by a Reuters poll that showed the economy would contract this quarter and next, meeting the technical definition of recession.

In Britain, outside the European Union, the downturn has eased slightly this month, and companies have reported the weakest cost pressures since mid-2021. Overall the survey fitted with other signs that the economy is contracting at a slow pace.

In the bloc, new orders in the private sector fell at a slower pace and soaring price growth – driven by higher energy costs in the wake of Russia’s war in Ukraine – waned further. While input prices rose at their slowest rate since May 2021, the PMI subindex tracking output prices was at its lowest in a year.

“Some good news for once, with the euro zone PMI ticking up in December. Inflation pressures continue to fade due to lower demand and moderating supply chain problems. For the ECB, the latter adds to doubts about yesterday’s hawkish tone,” said Bert Colijn, senior economist at ING.

Optimism about future output increased to a four-month high. But declining demand forced firms to reduce headcount at the second-weakest rate since February 2021.

Activity in the bloc’s dominant services industry declined again, but the headline index increased to 49.1 – the highest since August. The Reuters poll had predicted no change from last month’s reading of 48.5.

While prices increased at their weakest rates in about two years, an index measuring output, which feeds into the composite PMI, jumped to a six-month high of 47.9.

‘Nature at risk’: protests as thousands of protection laws on verge of being scrapped – video | UK news

PanzerGlass: We tried to break the glass of an iPhone | Video