Shah Rukh Khan and Gauri Khan’s daughter Suhana Khan is all set to make her big Bollywood debut with Zoya Akhtar’s ‘The Archies’. The first look and a teaser of the film was released on Saturday and since then, Suhana and other star kids have been receiving love on social media. To celebrate the big day, mommy Gauri Khan binged on ‘The Archies’ themed cake at home.

She took to her Instagram story and offered a glimpse of the scrumptious chocolate cake featuring the picture of the first look of the film. The cupcakes were also placed near the cake that featured Suhana’s pictures from the film. She will be seen playing Veronica’s character. Have a look: 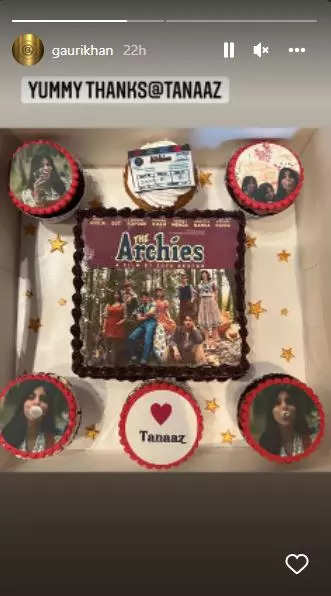 ‘The Archies’, that is slated to release on an OTT platform, also stars Agastya Nanda and Khushi Kapoor.

Soon after the first look was shared, Gauri and Shah Rukh turned cheerleaders for their princess. Gauri wrote, “Congratulations… all the best to all the amazing kids and team of #TheArchies . And who better than @zoieakhtar to guide them through this journey!! You did it @suhanakhan2!!!!!!!”

SRK penned a sweet note for her that read, “And remember @suhanakhan2 you are never going to be perfect….but being yourself is the closest to that. Be kind and giving as an actor….the brickbats and applause is not yours to keep….the part of you that gets left behind on screen will always belong to you….u have come a long way baby….but the road to peoples heart is unending…..stride forth and make as many smile as you can. Now let there be Light….Camera and Action! Signed Another Actor.”

Contract with America: The sequel