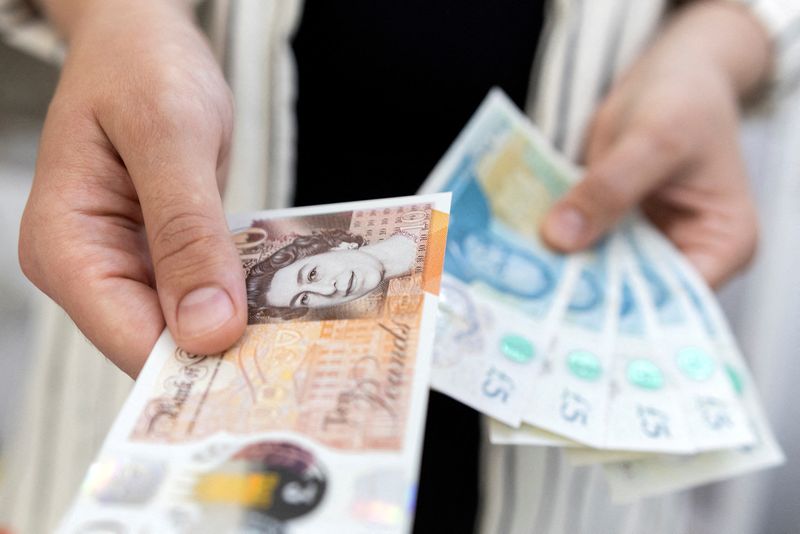 LONDON (Reuters) – British public borrowing unexpectedly jumped last month to hit its highest for any November on record, reflecting the mounting cost of energy subsidies, debt interest and the reversal of an increase in payroll taxes, official figures showed on Wednesday.

Borrowing rose to 22.0 billion pounds ($26.7 billion) from 8.1 billion pounds a year earlier – before Britain was hit by surging prices that have forced the government to subsidise heating and electricity costs for millions of households and businesses.

Economists polled by Reuters had forecast a much smaller increase to 13.0 billion pounds.

The news comes as the government faces a wave of strikes in the public sector – including nurses and ambulance drivers – as well as in the rail industry which relies heavily on subsidies.

Responding to the data, finance minister Jeremy Hunt repeated his position that he had no wish to change his spending plans. These allow no scope for public-sector pay to keep up with inflation, which hit a 41-year high in October.

“We have a clear plan to help halve inflation next year, but that requires some tough decisions to put our public finances back on a sustainable footing,” Hunt said.

Last month the British government’s Office for Budget Responsibility (OBR) revised up its forecast for borrowing in 2022/23 to 177.0 billion pounds, or 7.1% of gross domestic product, from an earlier estimate of 99.1 billion pounds.

Borrowing had looked set to rise even higher under Hunt’s predecessor, Kwasi Kwarteng, who was forced to quit in October along with then-prime minister Liz Truss after markets rejected their ‘Plan for Growth’ and pushed sterling to a record low.

Samuel Tombs, chief UK economist at Pantheon Macroeconomics, said Wednesday’s data appeared roughly in line with the new OBR forecasts, but he was less confident that borrowing would fall as fast in future years as the OBR predicts.

“The rolling nature of the new fiscal targets, and building demographic pressure, suggest that plans for very modest real-terms increases in departments’ budgets in the mid-2020s will not be followed,” he said.

Instead, borrowing was only likely to fall to around 4% of GDP by the mid-2020s, above the 3% ceiling set by the government, Tombs said.

Public debt on the government’s preferred measure – which excludes public-sector banks and lending by the Bank of England – rose to 86.7% of GDP in November or 2.176 trillion pounds, up from 85.2% or 2.024 trillion pounds a year ago.

Borrowing so far this financial year is 6.7% lower than between April and November 2021 at 105.4 billion pounds, the Office for National Statistics (ONS) said, but that improvement is rapidly going into reverse.

The ONS estimated that new energy support measures cost around 7 billion pounds this month, while debt interest payments – which are partially linked to the soaring rate of inflation – jumped by 2.4 billion pounds from a year ago to 7.4 billion.

By contrast, National Insurance contributions (NICs) – one of Britain’s three main sources of tax revenue alongside income tax and value-added tax – grew just 1.3% year-on-year in November, much less than the 14.6% rise for the fiscal year to date.

November marked the reversal of a rise in NICs which took place in April when Rishi Sunak – now prime minister – was finance minister. The increase was unpopular with Conservative Party members and was a key reason why they picked Truss rather than Sunak to succeed Boris Johnson as prime minister.

Kwarteng ordered the increase to be reversed after Truss appointed him finance minister, and it was one of only a few of his tax cuts which Hunt retained.