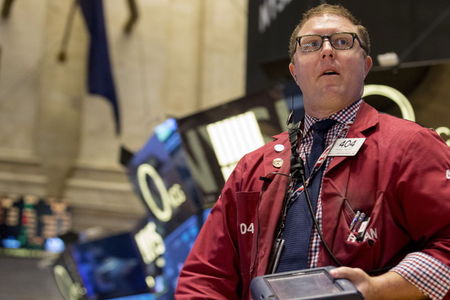 Investing.com — The S&P 500 slumped Monday, as the Russia-Ukraine conflict continued to push oil prices to 14-year highs, stoking fears that red-hot inflation will be here to stay longer than expected and derail economic growth.

The third round of Ukraine-Russia talks ended with both sides indicating little progress had been made in search of a resolution to the conflict. The failure to reach a breakthrough heightened concerns about the economic impact of soaring commodity prices including wheat, corn, nickel and oil.

Oil prices topped their highest level since 2008 after the U.S. said it was mulling imposing a ban on Russia oil and gas.

There is a hope the U.S. and Iran will reach a new nuclear deal, bringing much-needed Iranian oil barrels onto the market, but the potential supply from the Islamic Republic isn’t enough to offset the risk of loss of Russian oil.

Consumer discretionary stocks were the biggest sector decliner, led by U.S. luxury fashion and apparel stocks on concerns that weaker investor sentiment in Europe will weigh on growth.

Wedbush downgraded Ralph Lauren and PVH to neutral from outperform as both companies are “very reliant” on European growth, which will likely take a hit from the Ukraine-Russia conflict.

The selling in bank stocks showed no sign of end. Regional banks including Synchrony Financial (NYSE:), and SVB Financial (NASDAQ:) and Signature Bank (NASDAQ:) continued to take a hammering, while megacap banks such as Bank of America (NYSE:) (NYSE:) and Wells Fargo (NYSE:) were also deeply in the red.

In other news, Bed Bath & Beyond (NASDAQ:) surged more than 37% after GameStop’s Chairman Ryan Cohen said the retailer should consider a sale and a spin-off its buybuy Baby chain. Cohen has a nearly 10% stake in Bed Bath & Beyond.

Mandiant (NASDAQ:) surged more than 16% on reports that Alphabet (NASDAQ:) is reportedly in talks to acquire cyber security firm.

The broader market, which has slipped deeper in correction – a more than 10% loss from its recent peak – appears to be trying to find a bottom.

“Small-caps are starting to bottom …  a positive sign that U.S. equity markets in general are now searching for some type of bottom in earnest,” Janney Montgomery Scott, but added that “this does not necessarily preclude more volatility ahead.”