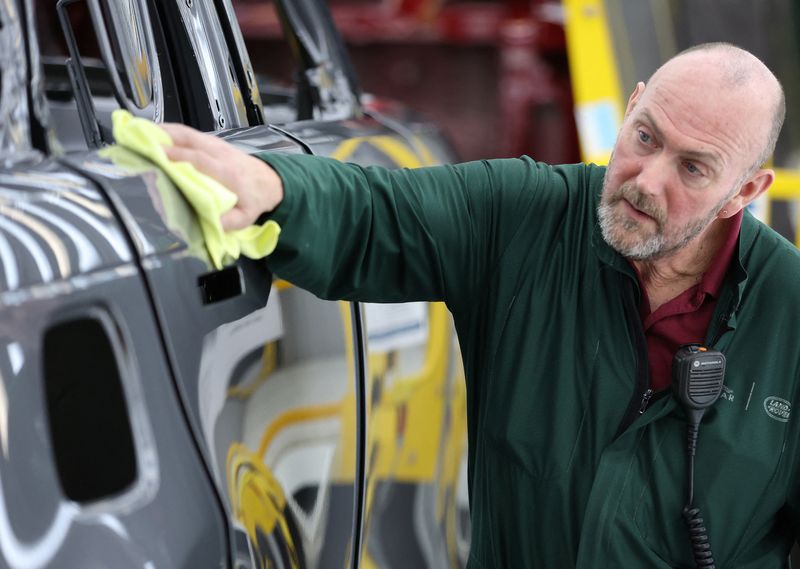 © Reuters. FILE PHOTO: A member of staff checks the paintwork on Range Rover bodies as they pass through the paint shop at Jaguar Land Rover’s factory in Solihull, Britain, December 15, 2022. REUTERS/Phil Noble

LONDON (Reuters) – British factories’ output and export orders slid this month, according to a survey on Monday that underlined the troubles faced by the manufacturing sector, including high inflation and a weak global economy.

The Confederation of British Industry (CBI) said its gauge of manufacturing output during the three months to December fell to its lowest level since September 2020.

Its gauge of new orders cooled to -6 in December from -5 in November, a smaller drop than the decline to -9 which economists had forecast in a Reuters poll, and still above the series’ long-run average.

However, export orders fell sharply to -19 from -18 and manufacturers’ price expectations strengthened.

“The corrosive effect of higher inflation on demand is increasingly clear, as manufacturing output contracted at the fastest pace in two years over the last quarter,” CBI deputy chief economist Anna Leach said.

The survey of 220 manufacturing companies took place between Nov. 23 and Dec. 12.

Sam Bankman-Fried agrees to US extradition 'to put the customers right': Report By Cointelegraph