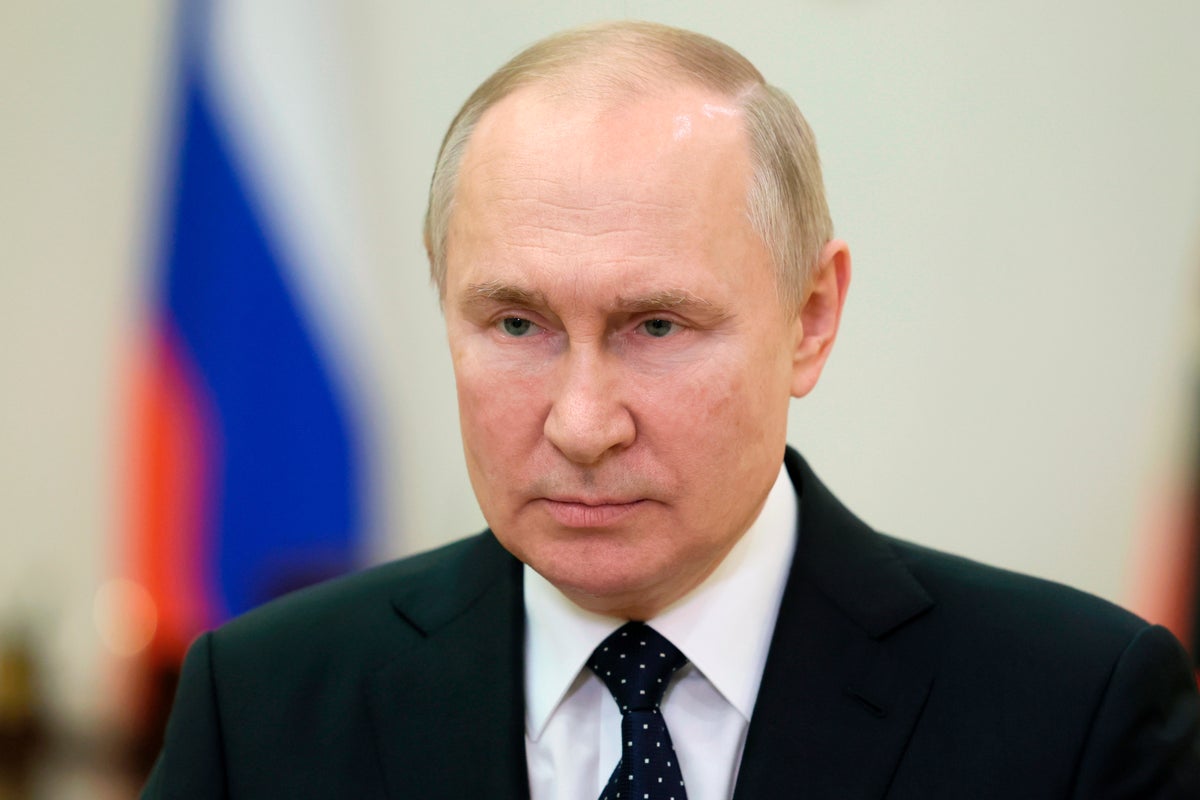 ‘We will beat Russia,’ says Zelensky

Russia has warned more US weapons aiding the war in Ukraine will worsen the siege, issuing a direct threat to the war-hit country on the sidelines of Volodymyr Zelensky’s visit to Washington.

The flow of western weapon supplies to Ukraine has triggered “an aggravation of the conflict and, in fact, does not bode well for Ukraine,” warned the Kremlin spokesperson Dmitry Peskov on Wednesday, adding that Russia saw no chance of peace talks with Kyiv.

His remarks came just hours before Mr Zelensky addressed the US Congress amid a rousing cheer and support for the nation under Russian invasion. The Ukrainian president was also seen holding back tears as all members of the US house gave him a standing ovation.

The high-level diplomatic visit between Mr Zelensky and Joe Biden has not gone down well with Russia which has warned that this will backfire.

Fighting has continued to batter Ukraine’s east amid Volodymyr Zelensky’s visit to Washington as Russian attacks targeted the Zaporizhzhia region.

Russian forces have pushed their offensive near the battered eastern front line in Bakhmut and Avdiivka — regions currently being hotly contested in Ukraine — and made the towns and villages the focal point of fighting in Donetsk, Ukraine’s military said last evening.

“Each day, there are anywhere from seven to 10 attempts to storm our positions. And it’s the same at night,” the commander of Ukraine’s “Freedom” battalion Petro Kuzyk said.

“They won’t be able to take Bakhmut, but if they take the heights above it and set up their artillery and cut our logistical arteries, that will make the situation much more difficult,” Mr Kuzyk said.

Mr Zelensky, dressed in cargo pants and his signature miltary-style jacket, was greeted by the president and First Lady Jill Biden, who quickly escorted him through the executive mansion’s diplomatic entrance.

Mr Zelensky’s arrival in the US marked the first moment since Russia invaded his country 300 days ago that the ground under his feet was foreign soil.

Andrew Feinberg has the story.

Explained: What does the latest US aid mean for Ukraine

The massive $1.85b package by the Biden administration for Ukraine will, in big ways and small, expand the abilities of Volodymyr Zelensky’s troops to take out incoming Russian airstrikes and continue counter-offensives to push back against the invading troops.

Zelensky visited Washington yesterday as Ukraine enters the thick of the winter with no respite from Russian strikes and the prospect of the war being dragged on through winter.

But the Ukrainian president’s visit, followed by the package will allow the US president to deliver on his commitment to one of Mr Zelensky’s most urgent battlefield requests — a Patriot missile battery.

Here’s a look at some of the weapons systems the US is providing Ukraine:

Volodymyr Zelenskyy’s dramatic visit to Washington was a moment for the White House to demonstrate to Russia’s Vladimir Putin that the United States would sustain its commitment to the war for “as long as it takes.”

It also provided the Ukrainian president, dressed in military green, the opportunity in the grand setting of the U.S. Capitol to thank Congress for the billions of dollars that are sustaining his country in the fight.

“As long as it takes” is powerful rhetoric, but it now collides with a formidable question: How much more patience will a narrowly divided Congress — and the American public — have for a war with no clear end that is battering the global economy?

The majority of Americans, polls show, continue to support aid for Ukraine as it has managed to repel a Russian military that military analysts — and some U.S. government officials — believed at the start of the war would quickly overwhelm Ukrainian forces.

Aamer Madhani and Lisa Mascaro have the full story.

Russia has lost 100,000 soldiers, including mobilised troops, during the war in Ukraine, the country’s defence ministry said.

“100,000 soldiers have been recognized with awards in 10 months of the full-scale war – russian #DefMin Sergei Shoigu. What an amazing coincidence,” the ministry said today, calling the elimination of a hundred thousand troops a ‘grim jubilee’.

GOP congressman accuses Biden of ‘fooling himself’ on Ukraine aid

A Republican congressman contended ahead of Volodymyr Zelensky’s speech to Congress on Wednesay that Joe Biden was the biggest hurdle standing in between Capitol Hill and Washington approving more aid to Ukraine.

In an interview with The Independent, Rep Brian Mast of Florida argued that it was not his party that presented the greatest resistance to sending more aid to Ukraine, but rather faulted a supposed lack of strategy from the Biden administration.

See also  Life-saving drugs, here are the most expensive in the world

“There’s a half-a**ed approach going on…what’s going on here?” Mr Mast remarked. “The president is doing the sort of, the guise of saying, ‘we don’t want to be escalatory.’ And that’s a very real thing when you’re talking about a situation where nobody can say that there’s a zero per cent chance of nuclear war.”

John Bowden has the details.

Ukrainian authorities have found the bodies of seven civilians, including a teenage girl, in a mass grave in the Pravdyne village in Kherson, the country’s defence minister said.

The southern city was recaptured by Ukrainian troops in November from the Russian forces.

As of yesterday, bodies of about 500 civilians who died during the Russian occupation have been found in the northeastern Kharkiv province.

WATCH: Biden says Russia is using ‘winter as a weapon’ during joint address with Zelensky

Joe Biden is accusing Vladimir Putin of deliberately targeted civilian infrastructure as winter continues in Ukraine, amounting to using “winter as a weapon.”

More US weapons to Ukraine will inflame war, says Kremlin

Inflow of more US arms in the Ukraine war will stoke the conflict further, the Kremlin said yesterday.

The Kremlin spokesman Dmitry Peskov said the expansion of western weapon supplies to Ukraine has led to “an aggravation of the conflict and, in fact, does not bode well for Ukraine.”

This comes as Vladimir Putin said that Moscow will use lessons learned in the war to “develop our armed forces and strengthen the capability of our troops.”

The Russian president added that a special emphasis would go to developing nuclear forces, which he described as “the main guarantee of Russia’s sovereignty”, in a meeting with his top military brass.

Zelensky thanks speaker Pelosi for helping Ukraine ‘in all possible ways’

“Met with speaker of the House of Representatives Nancy Pelosi @SpeakerPelosi. Thank you for your leadership in providing support to #Ukraine & the #Ukrainian people in all possible ways. It is a great honor to be here to address the Congress and all Americans,” he said in a tweet shared by the Ukrainian ministry of foreign affairs.