You’re reading State of Crypto, a CoinDesk newsletter looking at the intersection of cryptocurrency and government. Click here to sign up for future editions.

Two bitcoin exchange-traded fund (ETF) applications were denied last week. The big question for me is whether we’re learning anything new from these rejections. At this point, I’m not sure – a lot of these rejections really read the same.

Even if the bitcoin ETF rejections are all similar, it’s always worth digging in and examining the Securities and Exchange Commission’s reasoning, and what we can learn from it.

To no one’s surprise, the Securities and Exchange Commission (SEC) rejected yet more bitcoin ETF applications, this time by Grayscale Investments and Bitwise Asset Management.

Grayscale almost immediately filed a petition for review with the U.S. Court of Appeals in Washington, D.C., asking the federal court system to take a look at the SEC’s decision and either declare it is with the Administrative Procedures Act or possibly just remand the decision back to the SEC but asking it to take another look at the application and review its process as to whether or not the rejection complied with its internal processes.

The SEC reiterated its at this point very frequent concerns that there is the potential for market manipulation, that the stablecoin tether (USDT) might be used to manipulate the market and that it does not believe that Grayscale or its partner, the NYSE Arca exchange, have met their obligations to reassure the SEC that this is not possible.

To better understand the SEC’s rejection, we should probably take a look at the Teucrium futures ETF approval. This is the bitcoin futures ETF that was filed under the same law that all the spot ETF applications have been filed under. When it was approved earlier this year, a lot of bitcoin ETF advocates said they believed it was a sign the SEC might actually be willing to budge on the spot bitcoin applications.

The reasoning is this: SEC Chair Gary Gensler said last year that he was comfortable with futures ETFs filed under a specific law because that law enshrined certain consumer protections. The law that will govern spot bitcoin ETFs does not have the same protections.

In approving a futures ETF filed under the other law, the SEC opened the door to a spot ETF under that law, these advocates said.

(I’m keeping things relatively simple and vague – these are the 1940 and 1933-34 Acts, respectively, for those of you curious.)

See also  Koffee With Karan “Will Not Be Returning On TV” But…: Karan Johar’s Twist

In other words, the SEC believes the CME can identify futures market manipulation regardless of how it’s attempted, even if the CME futures market is based on the price of bitcoin in some spot markets.

As a footnote in the Teucrium approval notes, “the CME CF BRR aggregates the trade flow of major bitcoin spot platforms during a specific calculation window into a once-a-day reference rate of the U.S. dollar price of bitcoin.”

At the same time, the SEC says it does not believe that the CME’s specific surveillance tools would be able to identify manipulation of the spot market “even if the Exchange or the Sponsor had demonstrated a link between the BRR and/or the Index and the prices of CME bitcoin futures ETFs/ETPs and/or the proposed ETP, which they have not.”

Once again, we must turn to the footnotes for the real juice. In footnote 46 of the Teucrium order, the SEC states that its reasoning in approving a futures ETF based on the CME’s ability to spot futures market manipulation “does not extend to spot bitcoin ETPs. Spot bitcoin markets are not currently ‘regulated.’”

In other words, Gensler may indeed be holding the bitcoin ETF “hostage” in an effort to bring crypto exchanges under his agency’s regulatory umbrella.

So what does all this mean for the Grayscale appeal? Meh, who knows. The company staffed up and prepared for this in recent weeks, bringing on former Solicitor General Don Verrilli and having an appeal letter ready to go pretty much immediately.

Christopher LaVigne, a litigation partner at the law firm Withers, told CoinDesk that “Grayscale’s in an uphill battle here,” saying the law tends to be “deferential” to the SEC.

“It’s just whether they made that decision and exercised that discretion in a way that was completely arbitrary, completely capricious and had no grounding in the law,” he said. “I think that’s a hard standard to meet and it’s intentionally a deferential standard. Otherwise, all federal agencies’ decisions would be constantly second guessed and they’d be subject to an unending amount of litigation.”

Bloomberg Intelligence’s James Seyffart pointed out that other industries do have ETFs despite a regulated spot market during a Twitter Space we held last week.

“There’s equity markets that the ISG does not have surveillance sharing agreements with, that we have ETFs for,” he said. “My overarching view is more so that the the SEC and Gary Gensler are holding these applications hostage until he can get regulation of the underlying spot market.”

So the next question may be what this actually looks like – it’s hard to see Congress moving swiftly to clarify when or how a crypto trading platform must register as a national securities exchange, and the SEC itself has yet to publish any proposed rule making on the matter.

Last week was a big news week in the European Union. The bloc’s Council and Parliament, the two bodies that need to agree on new laws, have done just that twice over – for a landmark Markets in Crypto Assets Regulation (MiCA), and for identity checks on crypto payments. The latter is intended to stamp out money laundering, but with big consequences for privacy – and is an implementation of the international Travel Rule that’s proved so hard to apply in the crypto space.

The final deals seem to have steered clear of some near misses that had plenty of crypto companies sweating. In the end, the laws don’t ban the proof-of-work technology that underpins bitcoin, or impose endless checks on transfers to self-hosted wallets, or force decentralized finance players to register with the authorities (and who would fill out the form, anyway?).

In principle, MiCA offers a sweet deal to crypto companies – who, in exchange for jumping through the EU’s hoops, get to market their wares across the bloc, which is one of the biggest economies in the world. But there’s still some pretty major questions over exactly who will have to sign up to the new system, and whether stablecoin rules that are designed to avoid collapses like terraUSD’s (UST) might strangle the market all together. In particular, there’s a lot of confusion about what the MiCA deal means for non-fungible tokens (NFT) – and whether platforms like OpenSea will have to seek a license as the EU seeks to curb wash trades and other market abuses.

As the first major jurisdiction in the world to have such a comprehensive law, officials reckon they’re setting the tone for the rest of the world, and establishing the EU as the home of sound crypto. With the U.S. contemplating its own legislation on the issue, the bloc may not keep its lead very long.

CoinDesk reported both deals from the Room Where It Happened, here and here.

Changing of the guard 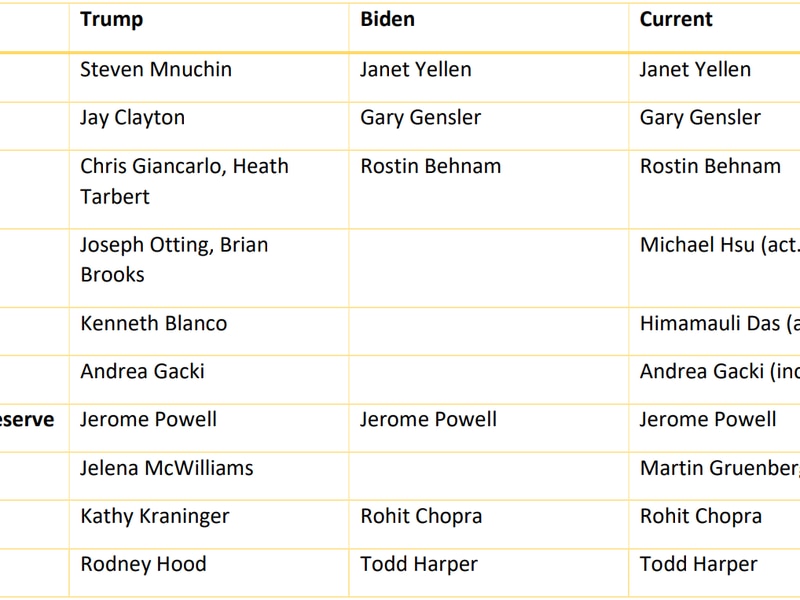 Fed Vice Chair for Supervision nominee Michael Barr is inching closer to a vote from the Senate.

Happy 10-year anniversary to the greatest fireworks show in history, when San Diego accidentally shot off 7,000 fireworks at once.

If you’ve got thoughts or questions on what I should discuss next week or any other feedback you’d like to share, feel free to email me at nik@coindesk.com or find me on Twitter @nikhileshde.

You can also join the group conversation on Telegram.

How Sri Lanka Snowballed Into Its Worst Crisis in 70 Years

iPhone 14 will cost more, but the entry price will be unchanged | Rumor