FTX’s Bankman-Fried to agree to U.S. extradition in about-face after hearing -source By Reuters 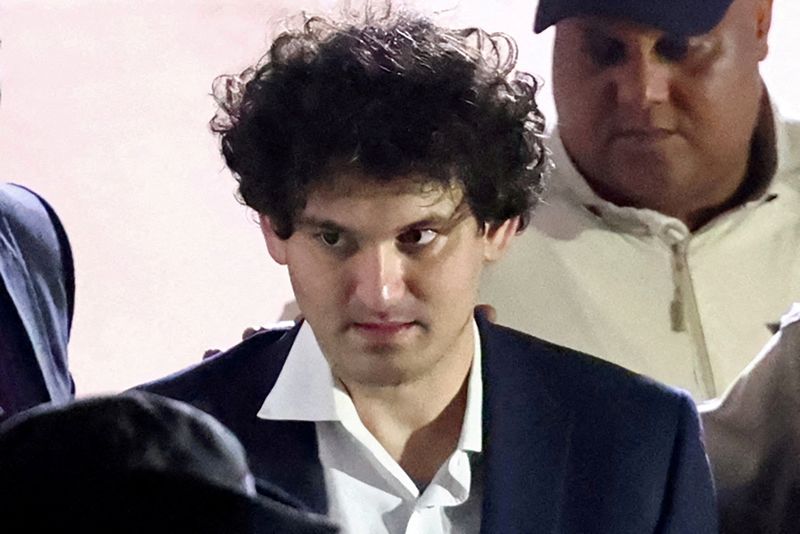 © Reuters. FILE PHOTO: Sam Bankman-Fried, who founded and led FTX until a liquidity crunch forced the cryptocurrency exchange to declare bankruptcy, is escorted out of the Magistrate Court building after his arrest in Nassau, Bahamas December 13, 2022. REUTERS/Dant

NASSAU, Bahamas/NEW YORK (Reuters) -Sam Bankman-Fried has decided to agree to be extradited to the United States to face fraud charges, a person familiar with the matter said on Monday, just hours after the FTX founder’s lawyer told a Bahamas judge he was not ready to consent.

The about-face paves the way for the 30-year-old cryptocurrency mogul to face charges in New York over accusations he stole billions from FTX customers to plug losses at Alameda Research, his hedge fund, before the exchange abruptly collapsed in November.

It was not immediately clear when Bankman-Fried would depart the Bahamas, where he was arrested on Dec. 12 per a U.S. extradition request. No further court date was set at the conclusion of Monday’s hearing.

Bankman-Fried’s abrupt decision came after a tumultuous appearance on Monday morning before Magistrate Shaka Serville at a court in capital Nassau, following reports by Reuters and other outlets over the weekend that he had decided to reverse his decision to contest extradition.

At the hearing, his local criminal defense attorney, Jerone Roberts, told Serville initially that he did not know why Bankman-Fried was brought to court on Monday morning.

Following a recess, the lawyer said Bankman-Fried had seen an affidavit laying out the charges against him, but wanted to see the indictment filed against him last week in federal court in New York before consenting to extradition.

Serville said at the hearing that he could not take any action on Bankman-Fried’s extradition without the former billionaire’s consent.

“I can only be moved by Mr. Bankman-Fried, and he has not moved me,” Serville said.

Bankman-Fried was given the chance to speak to his U.S. counsel over the phone and then remanded back to the Caribbean nation’s Fox Hill prison. He departed the courthouse in a black van marked “Corrections,” carrying a manila folder containing papers, a Reuters witness said.

Franklyn Williams – the Bahamas’ deputy director of legal affairs, who is representing the United States in its push to extradite Bankman-Fried – called the day’s proceedings “incredible” and appeared frustrated by the delay.

The 30-year-old crypto mogul rode a boom in the value of bitcoin and other digital assets to become a billionaire several times over and an influential political donor in the United States, until FTX collapsed in early November after a wave of withdrawals. The exchange declared bankruptcy on Nov. 11.

Bankman-Fried has acknowledged risk-management failures at FTX but said he does not believe he has criminal liability.

During Monday’s hearing, Bankman-Fried wore a dark blue jacket and an untucked white shirt – a departure from the casual attire he had sported during frequent public appearances in the United States and while running FTX from a ritzy corner of Nassau.

He spoke only to greet Serville and to confirm he would speak with his U.S. counsel. At one point during the hearing, Bankman-Fried leaned back with his eyes closed and appeared to be awakened by a court official.

On Dec. 13, a day after his arrest, Bankman-Fried was taken to a Bahamas correctional facility. A 2021 U.S. State Department report of the facility said detainees faced rodents and a lack of toilets, though local authorities said conditions have since improved. At his Dec. 13 hearing, he referred to the night of his arrest as “hectic”.

After Monday’s hearing, his criminal defense lawyer in the Bahamas, Roberts, told the New York Times that his client had agreed to be voluntarily extradited and that he hoped Bankman-Fried would be back in court later this week.

“We as counsel will prepare the necessary documents to trigger the court,” the newspaper quoted Roberts as saying. “Mr. Bankman-Fried wishes to put the customers right, and that is what has driven his decision.”

Krystal Rolle, a lawyer who has represented Bankman-Fried on non-criminal matters in the Bahamas, also confirmed comments that Roberts had made earlier to local broadcaster Eyewitness News Bahamas that Bankman-Fried would voluntarily waive his right to an extradition hearing.

Germany is (still) a Huawei hotspot in Europe – POLITICO

Are macroeconomic models true only “locally”?