Notorious B.I.G. in the Limelight in Metaverse VR Concert Experience

The spirit of Notorious B.I.G. was resurrected in the metaverse on Friday night, transporting thousands of attendees to a virtual recreation of 1990s Brooklyn for a performance that transcended space and time.

The experience was simultaneously broadcast live on the Notorious B.I.G.’s Facebook page, which I was able to view from my laptop. In addition, I used a Meta Quest headset to enter Horizon Worlds to gain access to the full, sensory-laden experience.

In Horizon Worlds, there were about 120 floating avatars gathered in a lifelike concert venue, tuning in from their virtual reality headsets. It was incredible to experience 360 degrees of sights and sounds, though I found the quick movements and flashing lights to be slightly disorienting and was glad to have the ability to watch a recording of the performance, which has since racked up about 68,000 views.

The iteration of Notorious B.I.G. that performed was created by Hyperreal, a digital tech company that is powering “high fidelity, emotionally real digital twins” of celebrities, as well as creating immersive virtual environments using VFX technology. “We started Hyperreal to disrupt the industry and create a new business model for digital humans,” said Remington Scott, CEO of Hyperreal, who has a long history of pioneering use cases for motion capture technology.

About 20 minutes into the experience, Notorious B.I.G. took to the virtual stage, performing classics like “Juicy,” “Big Poppa” and “Warning.” Audible cheers from the audience and a deluge of heart emojis sent in the Facebook chat highlighted the overwhelmingly positive reception to the performance. 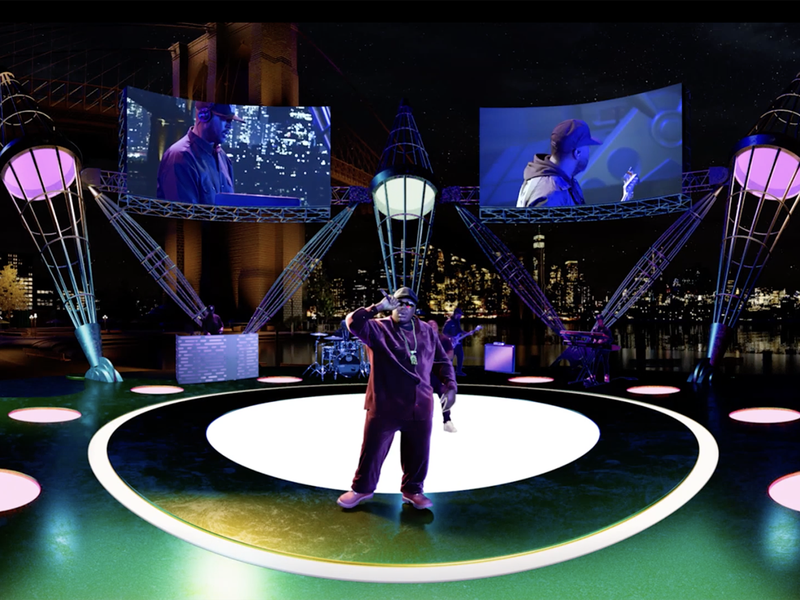 The graphics were impressively realistic, though at times the movements of celebrity guests like Diddy felt static and misaligned, reminding viewers that they were, in fact, not real. Accompanied by a full band, the experience still felt rich and even small details like hand gestures, shadows and wrinkles on clothing were carefully considered.

Scott told CoinDesk that Hyperreal teamed up with Voletta Wallace, Biggie’s mother, and others who oversee his estate to bring his likeness back to the stage. “We’re creating a digital human that is not just a hologram,” he said of what led them to virtually resurrect the artist, who was killed in Los Angeles in 1997 at the age of 24.

“For the last two years, we’ve been doing tests with the estate, seeing how [the digital Notorious B.I.G.] moves and performs and how real we could get the experience,” he said.

Several celebrities, including Paul McCartney and Madison Beer, have used Hyperreal to turn their likeness into virtual characters and extend the parameters of their career as the world becomes increasingly digital. “We’re building digital identities for celebrity talent that they own, they can monetize and they control the copyrights,” Scott said. “They use these talents, these Hyperreal models, as an interoperable asset across all digital ecosystems.”

Visual effects were also used to bring the late rapper Tupac on stage as a hologram at the Coachella Valley Music and Arts Festival in 2012, though some critics at the time called the performance “unnerving.” In addition, Tupac’s holographic appearance raised questions about the ethics of creating lifelike personas modeled after deceased celebrities.

Scott pushed back at criticism, saying that Hyperreal worked closely with Notorious B.I.G.’s estate and others that knew him intimately.

Ultimately, Scott said that the Meta Horizon Worlds concert experience allowed them to do things that would otherwise not be possible. “I think it’s a fascinating concept,” he said, “to be able to go back in time, using the metaverse as a time machine.”

Russian drones rain down on Kyiv as Putin heads to Belarus